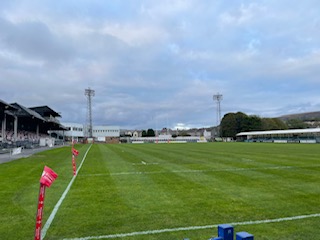 Neath and Pontypool meet in a huge Admiral National Championship clash on Saturday.
After the culmination of the WRU Championship Cup, this weekend marks the second round of competitive league action with the standout game taking place at The Gnoll.

Home side Neath were 30-22 winners away at Narberth in their first game of the season proper while Pontypool hammered Maesteg Quins 42-3.

Pooler have not lost a game for the last two campaigns, but Neath are expected to give them a stern test on home soil.
This is a big season for the Welsh All Blacks who are celebrating their 150th anniversary. They are hoping for a big crowd for the Pontypool game.
“We’re really excited about this season with Neath and the team got off to a good start away to Narberth last weekend,” said Neath chief executive and head of Cambria Sports Group Matt Church.
“We’re delighted to be back playing after what has been a difficult period of time for everyone due to the pandemic.
“We’ve had a good run of results and are looking to build on that in the next few weeks and then going into the 2022/23 season which will hopefully start from scratch.
“It’s an exciting time on the field, but also off it with the 150th year celebrations.
“We have a 150th year celebratory dinner planned for the weekend of January 29. The 150th birthday for Neath is January 31, 2022.
“Pontypool will be a big challenge for the team, but we’re looking forward to the task at hand  in front of our supporters who we are delighted to have welcomed back to The Gnoll”

Pooler have added to their ranks for the Neath clash with the double signing of props Scott Evans and Ross Jones who will both help strengthen their front row.
Evans is a tighthead while Jones operates on the other side of the scrum and has come out of retirement.
Evans initially joined Pooler from Cross Keys in 2019 and went on to make 16 appearances in all competitions scoring one try. He previously had spells at Oakdale and Bargoed. The former Dragons Under-23’s forward left the club in August but was eager to make a swift return. “I didn’t want to leave so the opportunity to re-join was an easy decision and one I took great pride in making,” said Evans.
“I’ve always loved what Pontypool stand for and their ambition to get back to top-flight rugby in the Premiership which is where they belong.
“The boys were amazing and welcomed me when I first joined and when I turned up again. To re-join was like I never left. There were a few new faces who were very welcoming too.
“I can’t wait to get the boots back on and have a great journey with the coaches and players and everyone who makes the club so great.”

Bargoed and Cardiff Met are level on points at the top with Pontypool going into round two. Bargoed travel to Bedwas while Met are at Beddau. Narberth meet Tata Steel.