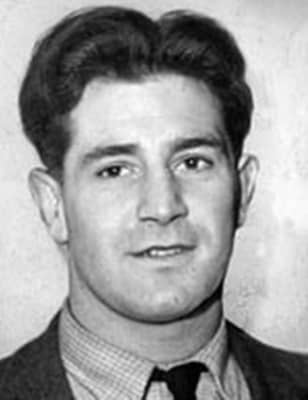 Today, September 23rd, is a significant day for one of Neath’s finest ever players – Courtenay Meredith who celebrates his 95th birthday.

For the benefit of younger supporters, C.C. (Courtenay) Meredith was one of the truly “world class” players who have worn the famous all black jersey of Neath RFC.

Courtenay was a product of Neath Grammar School and he joined Neath in 1949 from local club Crynant originally appearing in the back row.

However, he soon made the transition to the front row where he rapidly became a force as a mobile presence in the loose and a truly fearsome scrummager in the outstanding Neath pack of the time.

As the Neath forwards rampaged around Wales and across the border, he quickly earned the attention of the Welsh selectors and made his debut for Wales against Scotland in 1953 when he joined fellow Neath forwards Rees Stephens and Roy John for a 12-nil win at Murrayfield.

Later that year, the trio were in the Wales eight in the famous 13-8 victory over New Zealand at Cardiff.

Wales, of course, have never beaten New Zealand since and Courtenay is now the sole surviving player from that Wales team.

Courtenay was the best tight head prop in the home countries and, with a try against Ireland under his belt, he was selected for the British Lions tour to South Africa in 1955 where his reputation became world-wide.

He formed an all-Welsh test front row with Bryn Meredith and W.O. (Billy) Williams – a feat repeated by Neath’s Adam Jones alongside Matthew Rees and Gethin Jenkins in 2009.

Courtenay’s international career continued until his 14th cap in the Scotland game of 1957 but he continued with Neath RFC, captaining the Club in 1957/58 and advancing his club appearances to 250 – it would surely have been many more had it not been for international duties, trials and other calls for very many other invitational sides including the Barbarians.

Although primarily a tight head prop, he could operate with equal facility on the loose head and legend has it that he would sometimes “chase” props across to the other side of the scrum when they swapped sides to try to escape his powerful grip.

Contemporaries used to say that often the demise of these poor opponents would then be marked by Courtenay solemnly and ritually informing his pack-leader “Stephens, this bugger’s had it. They’d better fetch another one !”

At the end of his captaincy season, he shared a final Neath game with fellow Lion Roy John against Penarth on April 30, 1958, Neath winning 25-15 when he fittingly signed off with a try. That last appearance of two of their Lions was the end of an era for Neath (Stephens alone carried on) – what a pack !

A long time ago, perhaps. But in Neath RFC, Wales and Lions terms, Courtenay Meredith was and is a true legend.

So Courtenay Meredith, Neath RFC salutes you on this special day and wishes you a very happy birthday – and many more of them too !  MP