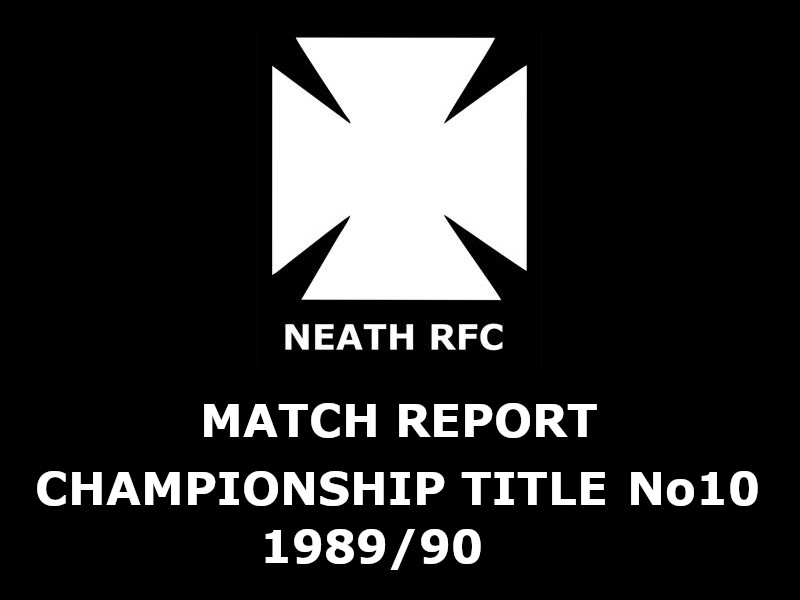 For the third time in their illustrious history, Neath made it back-to-back Welsh championship when Kevin Phillips’ men lifted the title again in 1989/90.

The 1988/89 championship had seen Neath build up to a tilt with the World Champions New Zealand at The Gnoll on October 25, 1989 – and that was the topic of conversation for rugby folk in the Town all summer.

From the opening game against Moseley, New Zealand dominated Neath’s thoughts during the first two months of the season. Selection options – and there were plenty ! – were fully explored and may have contributed to narrow losses to Bath (13-17) and at Llanelli (12-14) which did not deter Neath.

The big game was eventually lost 15-26 but not before inspired Neath gave the All Blacks a mighty shock and the toughest examination of their short tour – Alan Edmunds’ try converted by Paul Thorburn who kicked three penalties going down in club folk-lore.

The season was celebrated in full by Rod Rees in his “Grand Slam Club” and again I would commend it to those wanting the in-depth tale of another epic season.

Once again, Neath piled on the points and enjoyed massive victories over traditionally obdurate rivals in 1989/90 including :-

1,867 points and 344 tries were scored – 50 points and 1 try short of the previous year’s world records. That the record was not eclipsed was surely down to the fact that Neath played two fewer games in 1989/90.

Again, some of the margins are frightening remembering that tries were still only worth 4 points.

The “Western Mail” championship was won a long time before its percentage-based formula settled its destiny. Neath’s title was sealed in the 44th game of the season when they travelled to Aberavon on Easter Monday.

With home games against Cardiff and Newport and a Cup Final against Bridgend in the offing, Neath were virtually assured the title so they played only 5 of their Cup Final team and rested a host of players and unveiled the teenage Derwyn Jones in the second row.

All the tries came in the first-half as flanker Graham Evans gave Aberavon the lead but Neath quickly struck for three tries by Paul Williams, Graham Davies and Andrew Kembery. 12-4 up, Neath seemed content to conserve energy in the second-half when the only score was a Williams penalty as it ended 15-4 and they would celebrate properly at The Gnoll when Cardiff and Newport visited. The teams were :-

The title had been another supreme team triumph with all-round depth very much the key – five of the above team would be capped but Neath lacked 14 of their other internationals Paul Thorburn, Alan Edmunds (45 tries that season, short only of Dan Jones’ world record of 59 in 1928/29), Adrian Davies, Chris Bridges, Brian Williams, Kevin Phillips, Jeremy Pugh, Glyn Llewellyn, Gareth Llewellyn, Rowland Phillips, Phil Pugh, Mark Jones, Martyn Morris and David Pickering.

Neath were champions for the 10th time, seeing off second-placed Llanelli. And they recorded a second successive double too by beating Bridgend 16-10 in the Cup final.

One achievement that is often overlooked is the fact that it was the first time any club had recorded back-to-back doubles – the double double.