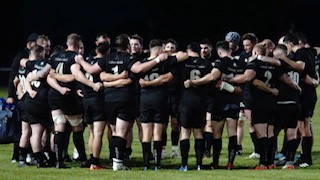 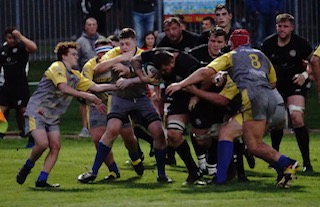 In their quest for match practice after a couple of cancellations, Neath were grateful to Gilfach Goch for the chance to re-visit the Division 2 East club and, in modern parlance, the evening ticked all the boxes as the Blacks showed their paces.

In all, Neath crossed for 10 tries, 5 in each half and some were of genuine quality. But the home side got two, battled hard throughout and deserved better in a wholly entertaining game

After their sedentary start to the season (Maesteg Quins kicked off at 2.30pm, Neath kicked off at 3.00pm !), the Blacks flew out of the blocks this time and, after outside half Steff Williams had given them field position, a solid scrum near the home 22 saw No.8 David Griggs send scrum-half Nicky Griffiths dashing to the corner after three minutes.

Gilfach were on the board quickly too when outside-half Josh Williams landed a penalty after a misdirected Neath kick landed them in hot water but the Blacks registered their second try on 15 minutes when Ryan Evans crossed following good work by Griggs and co-centre Ben Atkins from another steady attacking scrum.

Five minutes later, centre Evans got his second and Steff Williams added the conversion points before Gilfach hit back with a well worked try of their own which brought them back to 8-17 but in the lead up to half-time Neath hit them with two tries, both off lineout drives, the ultimate beneficiaries being scrum-half Nicky Griffiths and lock Sam Langford – the latter’s first try for the Club.

Neath entered the interval 27-8 to the good and, in the second-half, grand work by the visiting forwards saw winger James Roberts skate over for Steff Williams to convert but Gilfach, with the back row of Jordan Gibbons, Ben Williams and Nathan Suter putting in a strong shift, showed their qualities and hit back with a second well-worked try.

Neath were playing good combined rugby and replacement centre David Langdon crossed after a neat interchange with wing Ian Ellis. Passing accuracy across the line then led to James Roberts flying in for a superb second try and Steff Williams added the conversion.

While the backs dominated the scoring, the work of the Neath forwards was admirable : the six front-rowers scrummaged strongly, lock Jacob Blackmore won increasing lineout ball and the back row put in the graft.

Speedy hooker Josh Clark contributed several telling runs and the Blacks finished strongly. Great support running resulted in Ben Atkins going in at the posts for Steff Williams to convert again and, after James Roberts blew his hat-trick, the outside-half squeezed in for Neath’s 10th try which he goaled quite superbly from the touchline for a 15-point personal haul which set the seal on a promising Neath display.

Of course, tough tasks await – not least the next episode in the Maesteg Quins series on Saturday week at The Gnoll – so Neath will not get carried away but this was a most useful exercise and Gilfach Goch can be proud of their efforts on and off the field.