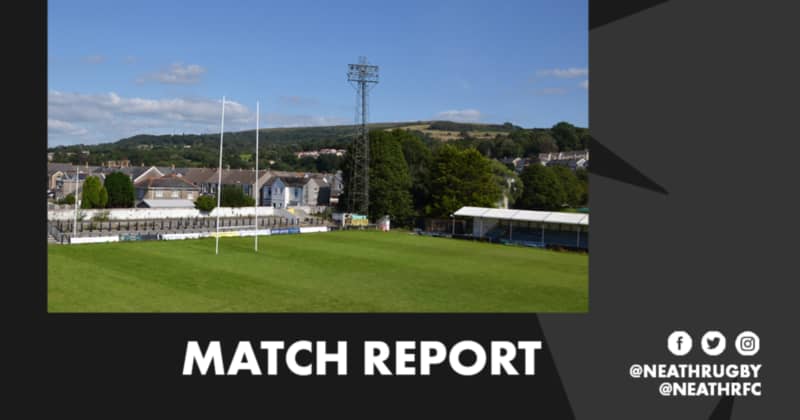 A wise  man once said that generosity is a virtue but unlimited generosity is a fast route to disaster – Neath, on the back of seven consecutive victories, would do well to heed those sage words !

All Championship clubs will attest that away wins at Narberth come along but rarely and, in another good but patchy display, Neath did enough to repeat their earlier Cup victory in Pembrokeshire to get their belated Championship campaign off to a flying start.

Neath were fast out of the blocks freeing impressive winger James Roberts who was forced into touch by a splendid cover tackle before a Neath lineout steal saw the home team penalised and Steff Williams stepped up to kick the goal.

Ten minutes later, a loose Narberth kick saw Neath’s outside-half combine well with captain Ryan Evans for the first try which he converted himself to put Neath 10-nil up.

Things were going well for the Blacks with their hard-working forwards setting a keen pace and, in the land that forged Neath’s finest loose-head Brian Williams, tight head Tim Ryan looked every inch a Neath prop with his powerful work in the loose. Lock Jon Barley Ied a useful lineout presence too.

But, on a rare foray into Neath territory, a Narberth charge-down saw Neath concede a drop out. This was the cue for Neath’s first act of gross generosity as the ball was returned directly to home centre Ianto Griffiths who, under no pressure at all, was gifted a simple dropped goal to make it 10-3.

Neath responded with more productive, hard-driving by the forwards and two well-struck penalties by Williams stretched the lead to 16-3 but it really should have been extended further as Ryan Evans made a hallmark searing break but cut inside with full back and both wings outside and flanker Alun Jones’ charge to the posts was held up with men on the outside.

Another tremendous Neath onslaught ended when patience got the better of them and they were penalised short of the line. Instead, when Neath strayed off-side in midfield outside their 22, the accomplished left boot of home full back Nick Gale landed a straightforward penalty – 54 years to the day when his grandfather kicked a penalty out of the Cardiff Arms Park mud for Wales in a 6-13 defeat by New Zealand.

16-6 up at the interval, Neath were in control but their munificence knew no bounds for two minutes after the restart they kindly brought Narberth right back into the game.

An over-optimistic decision to run a penalty award just outside their own 22 was compounded by wildly inaccurate passing and then a charged-down kick. Multiple wrongs do not make a right, the ball was hacked through and Otters’ outside-half Jonathan Rogers popped up in support for a try which Gale converted from the touchline.

That reduced Neath’s lead to 16-13 and Narberth’s suddenly-awakened belief saw them force another drop-out which obligingly went out on the full before Neath conceded a penalty which Gale kicked easily to level the scores – Neath’s hitherto authority had dissipated in a mad ten minutes.

Still, for all their mistakes, this Neath side lacks nothing in determination and home joy was short-lived as two minutes later full back Iestyn Morgan boomed a kick deep towards the posts, Narberth’s lengthy retort was seized upon by James Roberts who countered cleverly and linked with Morgan who romped over for Neath’s second try, his second since returning to action against the Wanderers.

Williams goaled but Narberth’s well-organised kicking game kept them going and Neath flankers Alun Jones and Owain Morgan had a great contest at the tackle zone with the admirable home trio. Indiscipline in the Neath ranks – back-chat is futile and should never be condoned – saw Narberth respond with another Gale penalty which put the game back in the balance at 23-19.

Neath then messed up a 5-metre attacking lineout and, when wing Aaron Grabham erred badly in running past an attacking kick, a clear obstruction was rightly penalised, Steff Williams’ kick was charged down and referee Mr. Lloyd Hughes (who otherwise had a very decent game) adjudged Neath to be offside and Gale kicked his fourth penalty to bring it back to 23-22.

It was good to see hooker Sion Crocker’s return from the bench after his troubles and Neath lifted themselves once more. After Williams just missed with a 35-yard penalty for which home skipper Richard Rees was binned, the powerful surging play of the Blacks forwards brought its reward when No.8 David Griggs touched down for their third try.

Williams converted to complete a 20-point match haul and more or less settle it at 30-22 but even then Neath’s benevolence extended to conceding a last-minute penalty which Gale surprisingly missed – it cost his team a bonus point from what had been a grand exhibition of rugby football by all and enjoyed by a fair-sized crowd.

In the final analysis, Neath were never behind and merited their win but the Blacks didn’t half make life difficult for themselves. If Neath’s improvement is to be sustained, such generosity certainly cannot be afforded – especially when they play Pontypool at the end of the month; otherwise their hopes will surely perish.

Ryan Evans who has been captaining the side during its recent successful run said, “We knew this would be a big challenge and everyone played their part in what was a very important win for us as we build towards the Pontypool game. We are excited about it, that’s seven wins on the trot now – we want to make it eight and carry it on.”

Before that, Neath are next in action on Friday when the 150th anniversary-celebrating Blacks take on 125th birthday boys Glais at The Gnoll (kick off 7.15pm) – gates open at 6.30pm and a good evening’s entertainment should be worth a visit ! 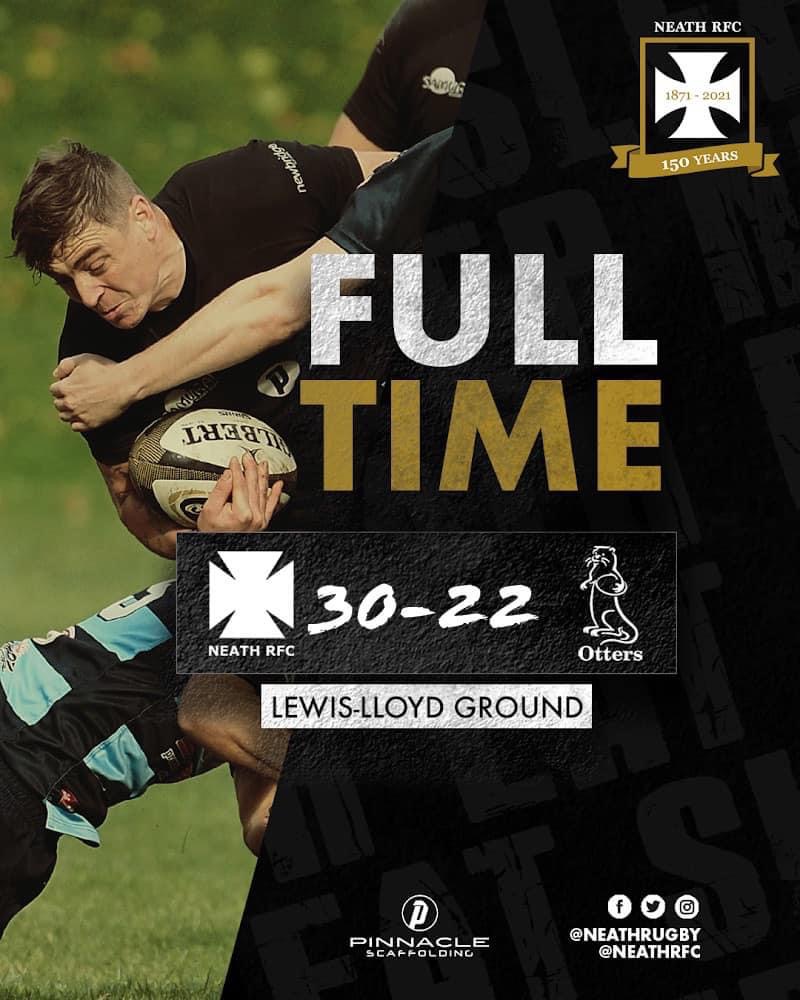