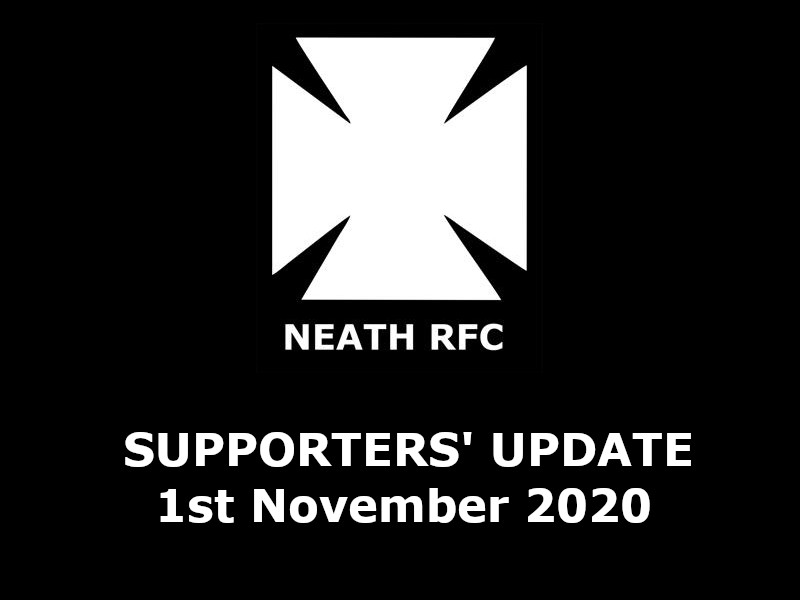 In the midst of the Welsh “Firebreak” and with the UK heading towards “Lockdown II – the Sequel”, we still appear to be as far away as ever from a return to rugby; a quick-fix vaccine before Christmas seems beyond us and, as days darken and nights lengthen, Coronavirus continues to wind its dreadful path.

Another feature missing this year will be our annual Community Fireworks Display which we have regrettably and inevitably had to cancel. We can only hope that next year we will be in a position to restore this hugely anticipated event in Neath’s calendar.

November is traditionally the month to remember and, as usual, we will honour our Neath RFC heroes on the web-site. It is sobering to think that just over 100 years ago so many Neath men laid down their lives in the Great War … and those who survived came home to a raging pandemic – of the Spanish ‘flu.

Rugby’s return following the First World War may perhaps signal hope for the present. The Armistice was signed on November 11th, 1918 and just 14 days later on November 25th, the Welsh Football Union (as it then was) decreed that clubs were “now at liberty to arrange inter-club fixtures”. Demobilisation had to be achieved first but by February, 1919 Neath RFC resumed fixtures with a 6-nil win over Skewen.

Therefore, if and when we emerge from this crisis, it should not be beyond modern wit to effect a speedy return to action and, since all clubs will be in the same boat so to speak preparation-wise, we should be able to cut the “6 week” summer-notice period too.

This week a study by Edinburgh University proved (if proof were ever needed) that playing and watching rugby football is actually good for you !

And how we need club rugby – and youth, junior and mini rugby too !

Time is running out for league rugby and the RFU have abandoned their leagues from Level 3 (National 1) downwards for 2020/21 but hold out hopes of clubs playing a modified game. It will be more a question of getting the Game, any game, on – and maybe we’ll need to follow cricket’s example by changing how we do things.

We could easily adapt to get the Game on and reduce the chances of transmission without any law changes. For example by having players arrive later, staggering changing arrangements, limiting “warm-ups”, no dressing-rooms at half-time, disinfecting match-balls, staggering showering, perhaps even no post-match ?

Most grounds can easily cope with socially-distanced crowds; outdoor assemblies being more desirable than gathering indoors. But if we are to play rugby, we need to act soon.

Until then, there is small consolation for the next month with televised internationals – can Wales re-discover the Welsh way and find the inspiration to break their five-game losing streak ?

The regions are satisfying TV demand too – and wasn’t it nice to see Keiran Williams and Reuben Morgan-Williams having a huge say in Ospreys’ win over Glasgow ? There is an obvious message there for the unprejudiced but they need the wisdom and objectivity to see it !

Off-field, the WRU continues to assist short of a return and the “virtual” AGM was held in midweek – lots of procedure but little else to report.

If there has been an up-side to the Crisis, it has allowed me to make great progress with the Club History. My target at the moment is to re-build the Club’s appearances records from 1945 to 1970 as then secretary Mr. Arthur Griffiths’ records were lost to the Club.

So if anybody has programmes, AGM reports or match reports (Sports Post and Football Echo especially), I’d be grateful to have sight of them.

To sum up, rising Coronavirus cases continue to thwart us – in the meantime, may rugby folk everywhere stay safe and well.