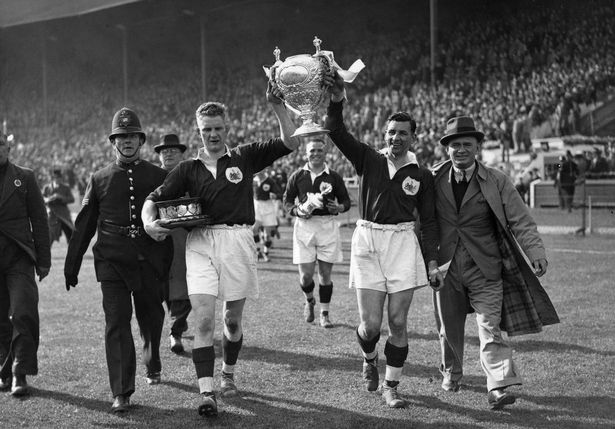 On Saturday at 3.00pm, a near-deserted Wembley will host the Rugby League Challenge Cup Final between Leeds and Salford.

Time was when the Cup was the pinnacle of the 13-a-side code season. Played at the end of the old “winter” season, vast crowds would make the long trip down south (many would travel from Wales too) for a lively weekend in the capital – an occasion which sprung places like Batley, Dewbury, Keighleyand Swinton into national importance for a few days at least.

It was a key day in the RL calendar, a grand occasion which is summed up by the picture below showing Neath’s Harold Thomas proudly holding the Cup with one of Rugby League’s all-time greats Gus Risman after Salford’s 7-4 win over Barrow in the 1938 final.

Incidentally, the Cup was presented that year by Aussie cricketer Don Bradman

Harold Thomas holds a special place in Neath RFC’s history as he and his brother D.L. (David Leyshon) became the first Neath brothers to represent Wales together against England in January 1937 in Wales’ 3-4 defeat at Twickenham. His son Nigel is still a Neath RFC season ticket-holder.

Earlier, the Lancastrian side also signed Neath’s outside-half Eddie (“Dodger”) Matthews and brilliant scrum half Cliff Evans but both had moved on before the final.

Saturday’s final might lack the atmosphere associated with past finals but both sides will “Up for t’Cup” !