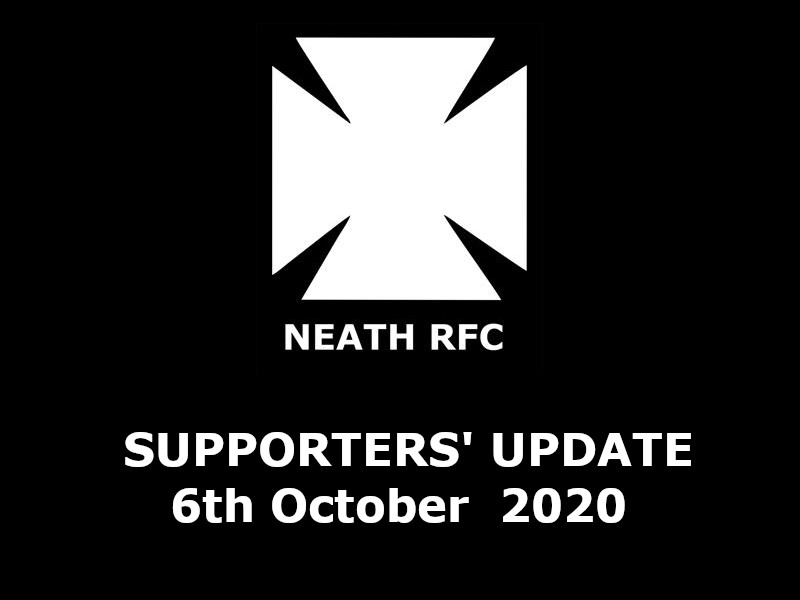 We should now be entering the second month of the 2020/21 rugby season – but the dreadful Coronavirus crisis continues and we still yearn for the return of the Club game.

Optimism is a dangerous temptation in these abnormal times when the Nation’s health is paramount – but it does not deter us from hoping for better news from Government, Senedd and Welsh Rugby Union. Of course, “Lockdown Two – the Sequel” (as film devotees might have it) has put a dampener on us all, snuffing out the fleeting positivity of our temporary return to collective organised (not forgetting sterilised) training and it seems that there is no immediate prospect of a resumption.

Even the sainted Eric Idle would have trouble finding much to “look on the bright side of” right now. However, when happier times come, Neath RFC will see two more forwards whose transfers have completed and we look forward to properly welcoming former Newport lock and captain Alex Jones and prop Keelan Marney from Glynneath.

Some hope – born of the desperation of TV lucre though it may be – is provided by the pro end of our Game getting underway. The Pro 14 (or 12 or 16) re-started this week to be followed by a glut of internationals between October 24 and December 5. Amazon Prime won the autumn TV rights but S4C will provide live Welsh language coverage on free to air – I confidently predict that they will be rewarded with record audiences ! Llanelli will host crowdless autumn Tests against Scotland and Georgia and Wales has been seeded for RWC23 (along with South Africa, England and New Zealand).

Staying on matters national, most will be aware that WRU chairman Gareth Davies lost his National Council seat to Ieuan Evans. In congratulating Ieuan on his election, the Neath club thanks Gareth for all his efforts over the last six years. Older Neath members will recall that Ieuan took his first steps in first-class rugby with Neath in wins over Pontypridd and Bath. He was a centre then but moved to the right and Llanelli – his election “manifesto” accentuated the value of the Club game. Welsh rugby awaits …

For the moment most clubs are putting a brave face on things publicly but privately many of my fellow secretaries have shared their concerns about the welfare of the Game and, if senior rugby is forbidden in this crisis, junior even youth rugby needs to be encouraged. Neath RFC will come through it but the Game’s return will inevitably see a lot of belt-tightening across all the clubs.

Sad news this week was the death of our former centre D.B. (Brian) Davies. The WRU obituary failed to mention that Brian played most of his Club rugby for Neath (117 games in all) and is the second member of the 1966/67 championship side to be lost this year, following on from Alan Butler – two more good men will be missing when we eventually pick up the pieces of our Game.

Finally, news that our much-travelled back rower Tomi Antozzi has joined Rugby Cisneros in Spain and we wish him well.

To conclude, predicting the course of this virus is time ill-spent because nobody really knows. The day when rugby safely resumes at The Gnoll cannot come soon enough for us all but, in the meantime, Colin Chapman will continue to update this website when we have any firm news.

For now, may rugby folk everywhere stay safe and well.