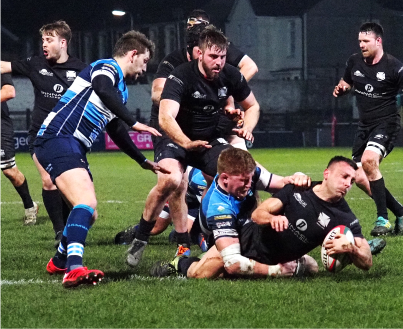 NEATH 23 BARGOED 40
Bargoed kept the pressure on Championship leaders Pontypool with this well-merited win at The Gnoll – but Neath gave them a shock and were very much in the game until Bargoed’s well-drilled, burly forwards strangled them in the second-half.

Still, signs are that Neath are tuning into the fast, all-action game that the coaches and Blacks’ supporters want to see and they carried on where they left off at Bedwas with some wonderful off-loading and handling in a first-half of genuine quality.

On a chill, still evening, The Gnoll was in its usual tip-top condition and the game started at a terrific pace, Neath going through the phases and Bargoed countering but Neath were victims of their own ambition when they conceded a try to their former No.8 Adam Powell with Steffan Jones adding the conversion points.

But Neath were really into their stride, some of the handling and backing-up by backs and forwards was almost Fijian-like and Bargoed were having trouble holding them. Scrum-half Nicky Griffiths went close but was held up, then impressive 18 year old full back Iestyn Morgan arrowed towards the posts. Eventually, Neath’s pressure told and flanker Tomi Antozzi crossed for Luke Griffiths to level with the conversion.

Neath were very much on top at this stage and continued to press – centre Jarrad Rees was full of running on his return alongside the ever-reliable Matthew Pearce, the scrum was solid enough and Sion Crocker led by example with the back row showing up well, Scott Malone always effective in support, and Griffiths posing problems.

The Blacks were rewarded with two penalties by winger Luke Griffiths to lead 13-7 but just before half-time Bargoed pegged Neath in their 22 and, when outside-half Jordan Rees (who otherwise hardly put a foot wrong) dropped a difficult pass, flanker Grant Rogers flopped on the ball to claim a try and Jones’ conversion gave Bargoed a one-point half-time lead at 14-13.

Bargoed served early notice of their intentions when Neath conceded on the resumption and took the lead with a forward try by flanker Ronny Kynes which ex-Cardiff man Jones goaled but Neath hit back, attacking strongly to the posts and, with the home supporters baying for a yellow card after the defence infringed, Neath had to be satisfied with a third Griffiths penalty to make it 16-21.

Bargoed then turned the screw and concerted, well-executed forward drives produced a try for hooker Rhys Buckley and then prop John Lavender strode through a weak tackle to touch down, Jones converting both. Neath refused to lie down and when Luke Griffiths scampered away for a try and rounded to the posts for the returning Matthew Jones to convert, it was 23-35. However, Bargoed had the last word as prop Ali Gardner-Key scored to make it 40-23 to the visitors who will chase Pontypool all the way.

The visitors deserved their expected win but Neath had threatened the Division’s best defensive-line more often than most and the Blacks can take small consolation from that and they probably played the more attractive rugby – but tackles were missed and the honours and the points rightly went to the Bargoed pack.

With the weather set to improve, Neath play their first home game for over a month on Thursday evening (kick off 7.30pm) when they entertain promotion-chasing Bargoed at The Gnoll.

Bargoed are always ready to explore the width of the pitch and Neath, following Saturday’s cancellation at Maesteg Quins, are keen to get back into action so supporters can expect an evening of exciting rugby.

Neath have named the side that was due to do duty at South Parade and hooker Sion Crocker will again lead the team in the absence of skipper Aaron Bramwell who is sidelined with a shoulder injury suffered in the 33-26 win at Bedwas.