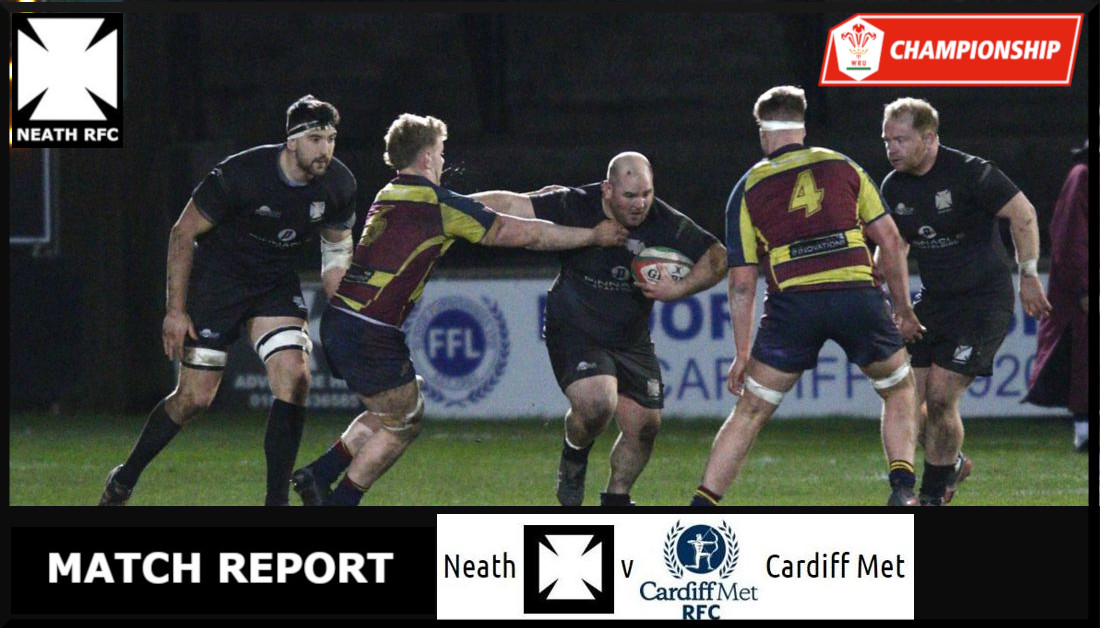 A magnificent second-half performance by Cardiff Met carried away the glory from a game which until half-time had seemed delicately poised and it left Neath with a whole lot more head-scratching.

On a cold evening, perfect for running rugby, the students, building towards their BUCS quarter-finals, clearly appreciated the immaculate Gnoll surface.

Neath ought to have gone in front but blew a five-metre line-out chance; instead it was the visitors who took the lead when outside half Evan Lloyd kicked a penalty and shortly afterwards he converted the first try of the game when the students exploited weak defence for a try by hooker Morgan Nelson.

The Blacks, playing into a strong wind, fought their way back and this time got a line-out right, lock Jacob Blackmore’s take and a concerted drive eventually leading to a rare try by prop Ben Uphill which winger Luke Griffiths converted superbly from the touchline.

Neath enjoyed a good spell up to half-time but could not break through and, at just 10-7 down, Neath would have been half-satisfied with their performance into the wind but what happened afterwards was a different story.

Despite having the vastly superior scrummage and the knowledge that their driving line-out would produce dividends, Neath failed to put into operation their coaches’ instructions and became suckered into an open, unstructured game which was made for the counter-attacking students.

Good to watch and very pleasing on the eye and Neath want to play it fast – but probably not against the students who have more ammunition in such a contest. After a superb chase-back tackle by young full back Iestyn Morgan had saved Neath’s bacon, a loose kick presented the Met with their first opportunity which wing Zach Clow eagerly accepted and then scrum-half Ethan McVeigh crossed, Lloyd converting both.

Neath responded with another driving line-out try by No.8 David Griggs which Luke Griffiths converted but the students hit back quickly with another try as Neath continually turned over ball. Poor Matthew Pearce got carded for his troubles after a series of high tackles against Neath went unpunished as advantage was played.

Cardiff Met finished with a flourish and the way that some experienced Neath forwards allowed themselves to be bossed should have them contemplating their navels for the full length of the Covid-19 crisis – and that may be some time !

Cardiff Met added further tries from George Gladding, Andrew Nurse and finally the accomplished Lloyd who converted two of them for a personal haul of 18 points. It gave the Met a comprehensive success as they ran a Neath team, lacking in self-esteem, off the park. In fairness, the students looked best-equipped team to have visited The Gnoll this season and their pace and ability to get the ball wide surpassed even the top two runaways Pontypool and Bargoed.

But it showed Neath, if it ever needed underlining, how much work needs to be done if they are to challenge next season – the gap is wider than many seem to think !

Neath play their second successive Thursday evening game when they take on Cardiff Metropolitan at The Gnoll (kick off 7.30pm).

Since the days when they were known as Cardiff Training College, the students have always played entertaining rugby and they are enjoying a successful season and are through to the quarter-finals of the British Universities competition.

Last time out, Neath’s fast game gave Bargoed considerable food for thought before bowing to the championship-chasers’ relentless forward pressure so an open game is in prospect.

Neath are again without captain Aaron Bramwell and have named much the same side with Macauley Griffiths replacing Nicky Griffiths the only change behind. Up front, Jacob Blackmore and Ben Lukes return for Matthew Davies who suffered a shoulder injury last week and Scott Malone who moves to an experienced replacements’ bench.