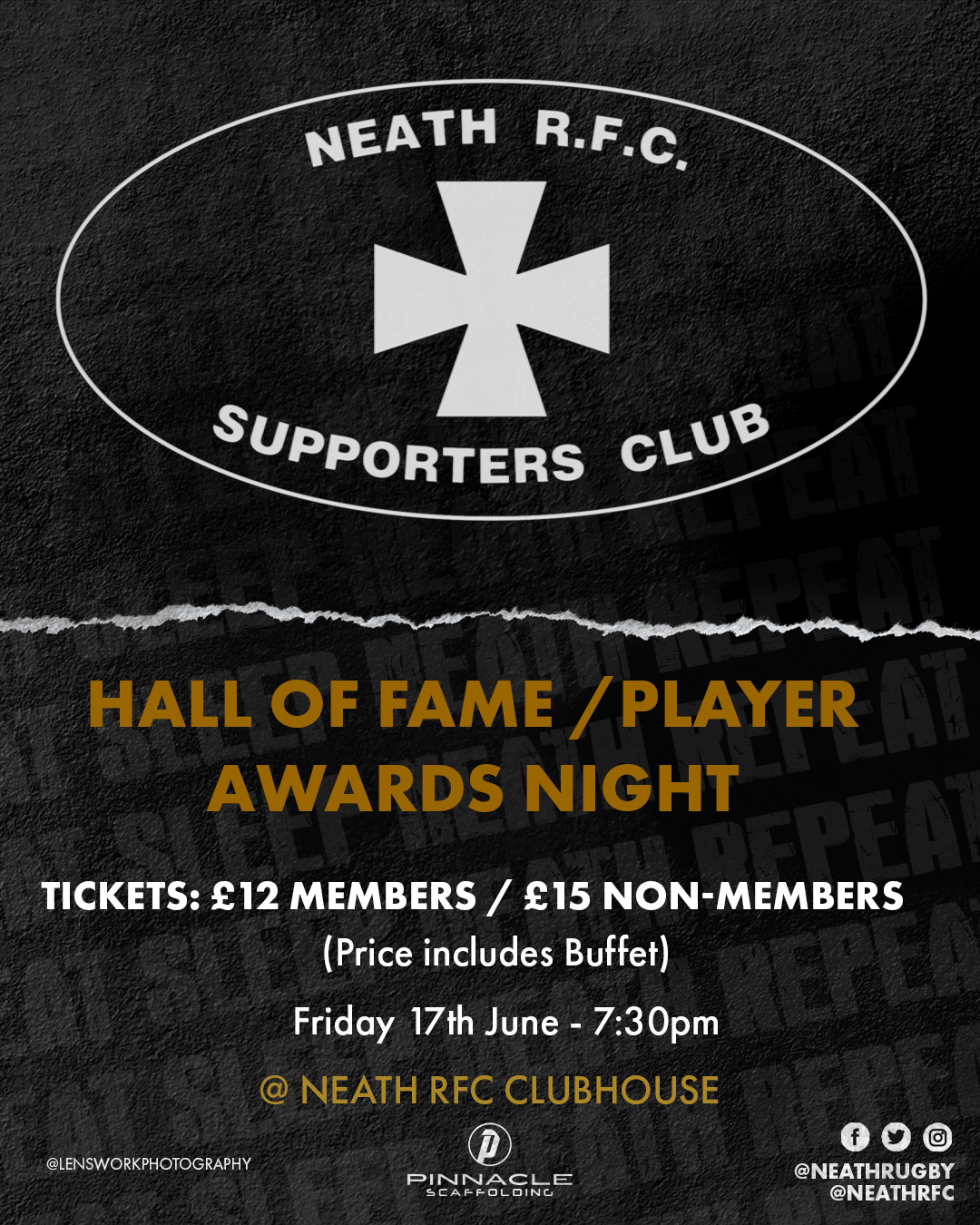 NEATH’S RUGBY “HALL OF FAME” IS ON ITS WAY BACK !

Neath Rugby Supporters’ Club is pleased to announce that its ever-popular Hall of Fame/ Presentation Night will take place at the Clubhouse on Friday, June 17.

NRSC chairman Len Kowalski said, “We have now fixed the date and will shortly firm up the nominations from Neath Rugby Supporters’ Club members for induction into the Hall of Fame for this year 2021/22.

“The evening is one of the most eagerly anticipated events in the rugby social calendar at Neath RFC and tickets are already selling fast. They will be on sale from Dawn Williams in the Clubhouse before Friday’s table-topping Neath-Cross Keys game at £12 (NRSC members) and £15 (non-members).

“To whet supporters’ appetites, we are also pleased to release the names of the five inductees elected for 2020/21 when, of course, the pandemic prevented us from holding the function.”

The names of last year’s five 2020/21 inductees are released as follows :-

Dr. E. Vernon Pegge made his debut for Neath in 1887/88 and quickly forged a reputation as a hard, intelligent forward. He caused a sensation by playing with his sleeves rolled up and turning out in shorts instead of knickerbockers. When medical duties at Briton Ferry detained him, he apochryphally commandeered a special train to to join his team-mates on tour in Devon. He took over the captaincy of the Club in 1888/89 and led through until 1891/92, winning his Welsh cap against England in 1891.

Bill Jones debuted as a wing in 1888/89 and, in his tenth season, he was elected captain. He then led Neath for a remarkable record nine seasons between 1897/98 and 1908/09. Always a regular try-scorer, he moved from the wing into the pack. His brothers Welsh international Howel and Idris played for Neath and, on retirement, Bill became Neath RFC’s touch judge and first Life Member.

The Alderman Davies’ School teacher played full back for Neath and cricket for Neath and Glamorgan but it is as a referee that he is best known, controlling 18 internationals including the Olympic final between USA and France in 1924 and controversially sending off New Zealand’s Cyril Brownlie aginst England in 1924/25. An outstanding schoolboy coach and doyen of Neath Wanderers he served as secretary of Neath RFC immediately after the Second World War.

Neath RFC’s captain when the Blacks “broke the mould” of the “Big Four” by winning back-to-back Welsh championships in 1909/10 and 1910/11. As captain, Frank Rees provided method and calmness behind a rumbustious Neath pack which earned the accolade the “Terrible Eight” four years before it was applied to the Wales pack in Dublin. A Melyn lad, the clever, footballing centre and occasional outside-half regularly represented Glamorgan County, appeared in Welsh trials and was in the Neath team “robbed” by the Springboks in 1912.

Second row Tom Arthur captained Neath in 1931/32 and was at the heart of the famed Neath pack in which he made over 300 appearances for over a decade. Originally from Glynneath, he became a County policeman and his wife ran a hair-dressing salon in Russell Street, Neath. He won a then Neath record 18 caps for Wales and was in the first Wales team to win at Twickenham in 1933. He was considered a certainty for selection to tour New Zealand with the 1930 Lions but the absence of police holiday pay prevented him from touring.

Neath RFC secretary-historian Mike Price said, “As Neath RFC celebrates its 150th year, the Supporters’ Club have again recognised five well-deserving characters from the past who enjoy legendary status here at The Gnoll.

“Their part in Neath’s lineage is immense – Dr. Pegge may be viewed as the ‘father’ of Neath forward play, Bill Jones continued that work as the Club gathered its strength and was still a huge influence when Frank Rees’ teams upset the odds. Albert Freethy played then and is remembered for setting new refereeing standards as well as for developing an outstanding group of future All Blacks and Tom Arthur personified the great, vigorous Neath inter-war packs.

“These leaders of men – and others like them – set the standards for Neath RFC and theirs is a tradition and heritage which we are all proud to follow.

“It is their example which helps drive us on and, while the pandemic set back our recovery plan, winning the Championship Cup and topping the league table briefly suggests we are on the up. With an eye on the future, we are striving to emulate the deeds of the past.”