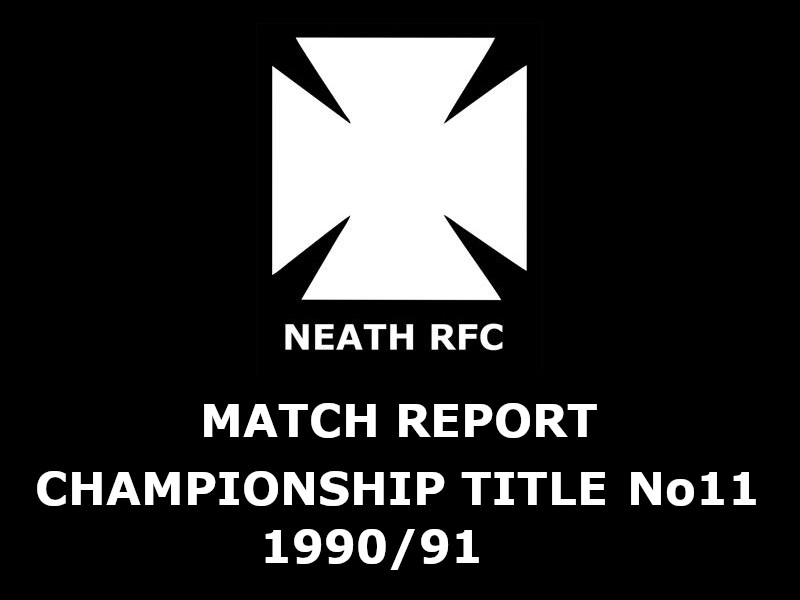 Welsh rugby changed in 1990/91 when National Leagues were introduced but it could not halt the march of Neath RFC who were once again Wales’ champion club as they won the first League title.

Neath had won the final two Western Mail championships and, by winning the first League title, they were champions for three seasons on the trot – the first time the All Blacks had achieved this feat.

Despite being weakened by the loss of three great men to rugby league – Allan Bateman, Mark Jones (Hull), Allan Bateman and Rowland Phillips (both Warrington) joined the international exodus north as Welsh rugby, leagues or not, struggled to cope with the new world order – Neath got off to a good start and lost only a friendly at Bath before Christmas.

The All Blacks’ second loss of 1990 came on December 29 when Neath, resting players for League engagements ahead, sent a much-changed side to Rodney Parade on to take on Newport who were highly motivated after being consigned to the second-tier of the League. It ended a magnificent run of 51 consecutive wins against leading Welsh opponents.

Ut Neath ploughed on in the League and, after beating Abertillery on March 30, the title was virtually Neath’s with four games to come but, after being edged out of cup semi-final by Llanelli, they fell three days later at Newbridge.

At least it set up the title-clincher to take place at The Gnoll – on Saturday, April 13 and here is Chris Baldock’s report on the game for “Wales on Sunday” :-

NEATH’S title celebrations were put on ice at Newbridge in midweek – and for long spells in this game Pooler desperately tried to become party poopers themselves,

For an agonising 10 minutes during the second half they camped threateningly on the All Blacks line with the score delicately balanced at 13-9.

But determined resistance and a sheer bloody-mindedness not to buckle under fierce pressure, summed up the qualities which have taken Kevin Phillips and his side to the top of the inaugural Heineken League.

Neath not only mount telling attacks, they can withstand them as well.

Withstand them they did yesterday – in stirring fashion.

Initially in the second period, Pooler drove the home team off their scrum ball to set up an attack which saw David Phillips go close following a  searing break.

A succession of scrums resulted – centre Bob Lewis dramatically held up over the line – but the Schweppes Cup finalists just couldn’t break down that defensive wall.

Eventually, a snap put-in by Ceri Jonathan caught hooker Garin Jenkins seemingly unaware and Wales no.2 Phillips struck against the head for full back Paul Thorburn to clear with a massive touch-finder.

That Thorburn clearance was greeted with familiar cries of “Neath, Neath, Neath” and effectively earned the vital points necessary to lift the Premeir Division crown.

Maybe … but his verdict is probably a touch harsh as the men of Gwent did give the home crowd more nail-biting moments as the match progressed before Thorburn sealed victory with an 80th minute penalty.

But few teams ever look convincing winning material at The Gnoll – especially after conceding two tries in the first half hour as Pooler did.

An incredibly irritating delay to play while a labrador (black, naturally) was chased around the field completely disrupted the opening exchanges but Neath composed themselves to strike the firsy blow in the 13th minute.

They won a lineout on the stand side and the ball was worked wide for centre Colin Laity to brush off several weak tackles to touch down near the far corner.

While Pooler gave the All Blacks countless problems in the scrum, the lineout was particularly barren and probably proved decisive with the Llewellyn brothers ruling the roost.

More ball from the big jumpers enabled Neath to power upfield in the 28th minute – a genuine flash of the form which has carried all before them.

Forwards supported backs in copybook manner and Pooler had no answer as Laity put midfield partner Jason Ball away.

That second breakthrough left the score at 10-3 and prospects looked bleak for the visitors.

But Pooler have improved immeasurably, winning 14 of their last 16 games, and they battled back with Arwel Parry landing two penakties – after missing an early “sitter” – to Thorburn’s one before half-time.

The confidence Parry’s successes brought paved the way for the second half cavalry charge which has become the team’s trade-mark in recent weeks.

But, despite the endeavours of skipper Chris Huish and his ever-supportive back-row, the Neath nut wouldn’t crack.

Then, as Pooler heads began to drop, Phillips urged his men to a great last effort which should have produced a third try, only for Laity to ignore an overlap on his right.

Thorburn’s second penalty was enough to satisfy the most demanding of supporters though, and captain Phillips was carried shoulder-high at the end as the champagne corks popped at last.

This depth allowed Neath to cope with those three massive rugby league losses, heavy international calls and a succession of sendings off – not all deserved as referees adapted to the heightened atmosphere of the new leagues.

Neath were champions for the 11th time – and added the first league title to becoming inaugural cup-winners in 1972 !