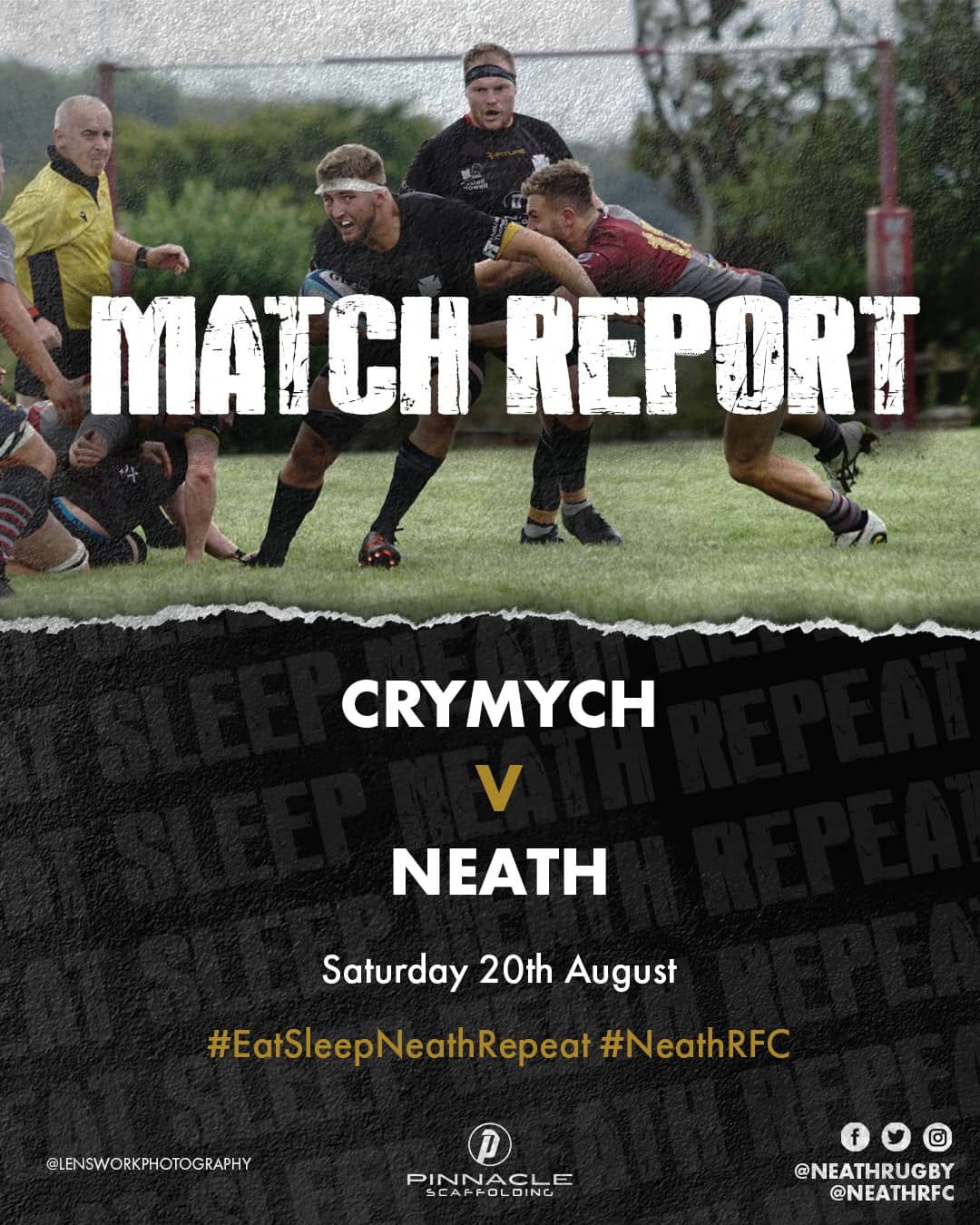 A day that did a lot of good !

Neath got almost everything they wanted from their second pre-season game at Crymych where the Blacks had to work extremely hard before pulling away in the second half against a game home team who played with tremendous spirit throughout.

Apart from providing valuable pre-season match practice for both teams, the main purpose of the day was to raise funds for former hooker Ifan Phillips and in this respect it was an unqualified success.

For Neath it was also a valuable chance to thank Crymych RFC who have always been helpful and have unearthed several grand players for Neath beginning with international prop John Davies in the 1980’s and including that fine forward Alex Humfrey who is now playing for Rosslyn Park.

Playing with a strong wind behind them, Neath were quickly into their stride and took the lead after five minutes when expert handling led to wing Ryan Griffiths getting a debut first try for Neath, outside-half Steff Williams adding the conversion points. 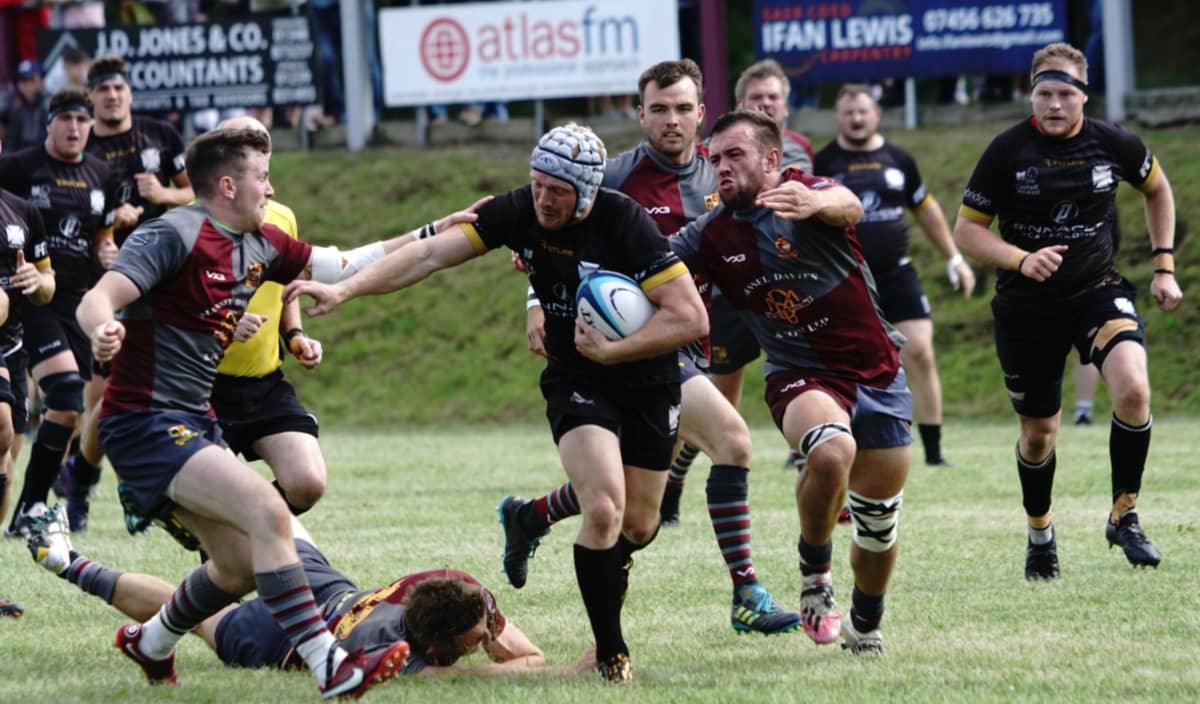 But the Blacks were forced back into their shell as Crymych stormed back and took the game to the visitors. Neath conceded too many, often unnecessary, penalties and were forced to defend for long periods with scrum half Elis Horgan as brave as anyone.

For the home team, flanker Llyr Evans and hooker Carwyn Rees were highly active at the tackle area while lock Dion Gibby was a good lineout source but Neath’s organisation was generally sound and often forced home fly-half Jac Davies to kick.

Neath full back Lewis Evans was composed and efficiently caught everything at the back and gradually Neath’s off-loading game and impactful straight-line running began to threaten.

But it was not until the 37th minute that the Blacks doubled their lead when lock Sam Martin’s lineout grab was taken up by his fellow forwards who drove hard for the line, Crymych infringed and the referee correctly awarded a penalty try.

And, on the stroke of half-time, the Blacks got their third try when good combined handling culminated in full back Lewis Evans sending a perfectly-timed pass to winger Jonny Bayliss who skated over.

It was the second week running that the skilful Resolven lad had delivered a crucial, precision pass to his wing – such efficacy will be vital this season ! – and Williams converted to make it a flattering 21-nil to Neath at half-time. 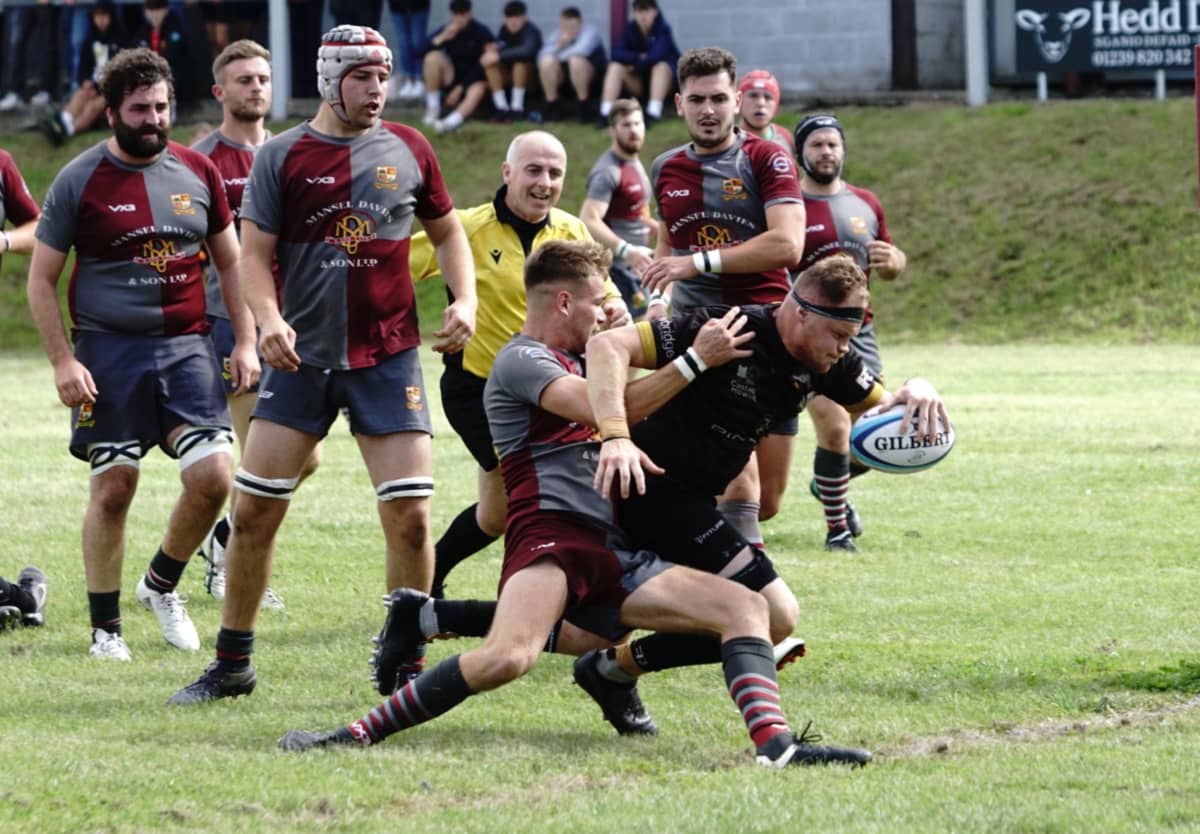 Just after the re-start, Crymych got the score which their first-half efforts deserved. Following good ball retention by the forwards impressive winger Tomos Lewis took an inside pass to cut through an unguarded defence and dab down near the posts – simple but effective ! – and full back Adam Phillips converted .

The home supporters’ cheers had barely subsided when Neath responded instantly and from an attacking lineout, Martin’s take was seized upon by the Black eight and hooker Sion Crocker pounced for the 15th try of his Neath career and Williams’ flawless conversion made it 28-7.

Replacements galore entered the fray and, as Neath frustratingly infringed once too often, Crymych came again, hit the corner with a penalty and the forwards mauled for replacement hooker Trystan Griffiths to get the home team’s second try which Adam Phillips converted to bring it back to 28-14.

With excellent advantages applied by referee Wayne Davies (Llannon) who controlled affairs with his usual aplomb, Neath got their fifth try, good support play leading to hard-working flanker Owain Morgan crossing for replacement Iestyn Morgan to convert and make it 35-14.

Crymych were tiring by now and the Blacks were well on top as sharp replacement scrum-half Ethan Nichols made a capable bow with one sizzling narrow-side break; the fresh front row put in a strong display with the busy Josh Clark one of four hookers to earn the approval of Neath’s onlooking legendary double-winning captain Kevin Phillips.

Neath’s now fast-advancing scrum took its toll and a well-worked move sent captain Ryan Evans careering through and he freed winger Ryan Griffiths who flew to the corner for his second try of the afternoon to ease Neath to 40-14.

In the fabled grandstand finish, more engaging approach play allowed prop Tim Ryan to bash his way over for Neath’s seventh try at which point the referee who had played his full part in an entertaining contest wisely blew the final blast – a little early perhaps – leaving Neath worthy winners of a good battle.

The Blacks had been made to graft and, for their part, the home side were delighted by Neath’s visit with what seemed like all of Crymych on parade on an afternoon which featured the home-coming of Wales’ Commonwealth Games medalists, the Croft twins… time was when the Neath pack contained at least four boxing champions !

The twins’ presence enhanced what home officials felt was a resounding success and, boosted by a productive post-match auction (Neath and Wales items included), Ifan’s fund will have benefited to the tune of several thousand pounds.

As the theme tune of James Bond’s “The Spy Who Loved Me”, Carly Simon wailed, “Nobody Does it Better” – Crymych RFC do … and did themselves proud !

* Neath complete their pre-season preparations next Friday when Swansea come to The Gnoll (kick off 7.15pm).