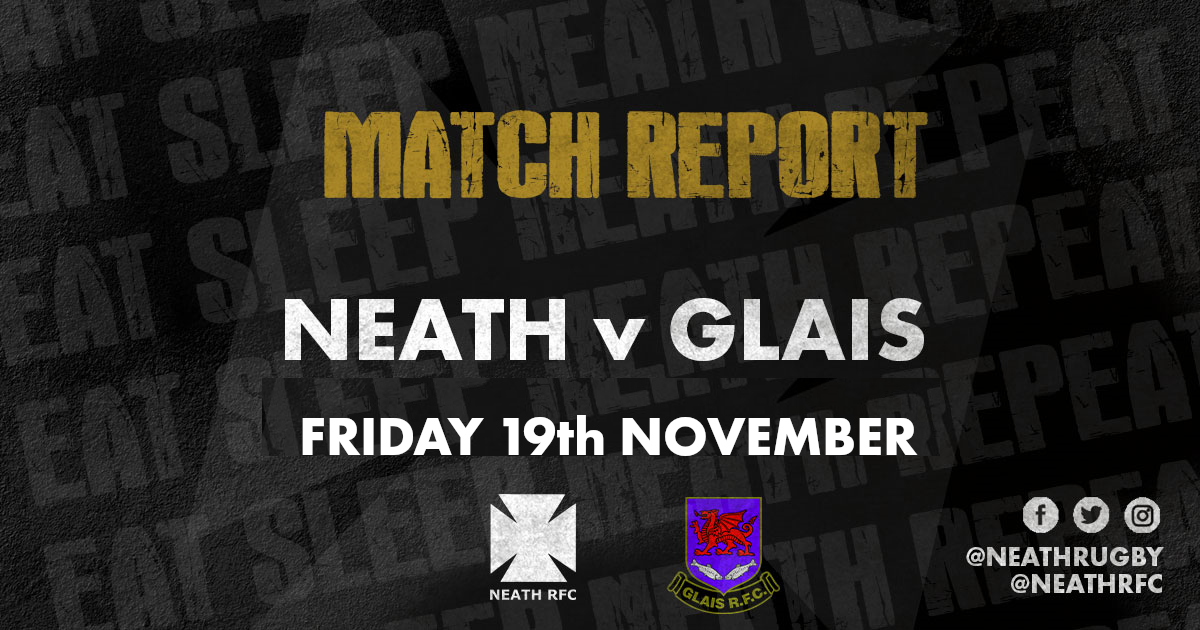 Neath, as expected, stretched their unbeaten sequence to 8 games with this handsome       10-try win over Division 3B side Glais who were outgunned but can nevertheless be proud of their display.

It was a battle of the birthday boys with Neath (150 years old) taking on Glais (25 years younger at 125) at The Gnoll in a fixture first played in 1957 during the great Courtenay Meredith’s year of captaincy although the legendary Neath prop did not play in that particular game which Neath won 29-3, centre Terry Thomas scoring two of the seven tries and converting three.

Of course, the Game has changed since then and it is doubtful, impossible even, whether any of this current Neath team will emulate Courtenay and go on to play for Wales and the British Lions.

There again, maybe one day the WRU will promote a Wales Amateur XV for working men who, for career or other reasons, play their rugby outside the full-time ranks. No harm in digressing or dreaming !

It was virtually all-change for Neath from the side which won so well at Narberth. Jacob Blackmore had the honour of captaining Neath for the first time and a decent crowd with a good number of youngsters enjoyed the revelry which certainly warmed a cold November evening.

Glais took an early lead with a penalty by outside-half Karl Williams and the visitors held Neath at bay until the 13th minute when Neath took the lead with a try by full back Louis Rees and Iestyn Morgan, playing at outside-half, converted as he did all of Neath’s tries.

Neath’s second try five minutes later was a back-row construction as No.8 Scott Hicks went on a 30-metre charge and found his acting-captain up in support and Blackmore raced the remaining 30 metres to dab down under the posts.

But to their credit Glais kept battling on and Karl Williams dropped a neat goal to make it 28-6 at half-time.

The Blacks kept up the pace in the second-half and, through a flurry of replacements too numerous to mention, six further home tries were added without reply.

Iestyn Morgan created his own with a neat chip, collect and accelerated away to finish, then winger James Roberts gathered an awkward ball in his own 22 and flew away leaving defenders trailing for a real virtuoso effort.

Glais then enjoyed a lengthy period of attack which had Neath pulling out all the stops defensively but Roberts and Morgan then combined to carve out a second opportunity for Rees before Neath worked off the back of a scrum and lock Sam Langford bull-dozed over at the posts.

As valiant Glais tired, Rees went in for a memorable debut hat-trick and right at the end there was a debut try too by replacement scrum-half Iwan Johnes who revealed some nice touches.

The immaculate boot of Morgan saw them all converted – altogether he kicked 10 in all in a fine exhibition.

Glais captain Gareth Bennett did his utmost to rally the out-gunned visitors and lock Daniel Davies and flanker Nye Thomas gave their all and the village club can console themselves with the summing up by a regular Neath supporter who is not prone to excesses : “great entertainment” said he.

The match will be remembered for the flowering of Neath’s young back division who excelled in the opportunity to show their paces in a match which was very well controlled by referee Mr. Wayne Davies (Llannon) who drew proceedings to a halt early.

Next up for Neath is a big one – Saturday’s game against Pontypool at The Gnoll (kick off 2.30pm) which will be a different challenge altogether and a bigger emphasis on defence by in all probability a different Neath team – don’t miss it !