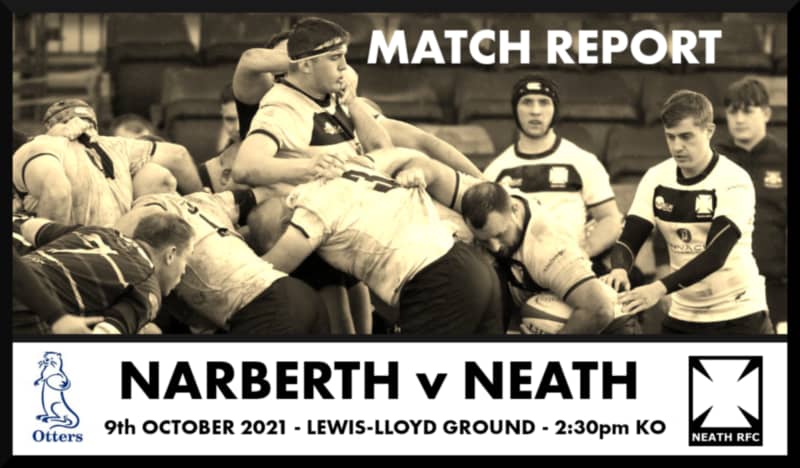 A strong first-half performance by Neath settled a solid away success at the Lewis Lloyd Ground which, for the history-minded, was officially opened by Morlais Thomas’ Welsh All Blacks way back in 1948 in a 31-8 win.

Narberth were defending an unbeaten record and had reached this stage of the WRU championship Cup by twice beating both Trebanos (25-16 and 43-12) and Ystalyfera (24-20 and 70-19).

Neath started purposefully and did most of the attacking in the first half. The Blacks opened the scoring when good approach work and excellent handling saw right wing Aaron Grabham pop up on the opposite flank to touch down for the opening try but David Langdon’s conversion attempt from wide out just grazed the right upright.

All Black prop power then rang the death knell for Narberth as the two Neath pillars each pounced for a try in turn. First, an Alun Jones lineout take was seized upon by his fellow forwards who tightly smashed their way to the line for Tim Ryan to claim his first try for the Club, David Langdon converting with aplomb to make it 12-nil.

On twenty minutes, the home defence failed to deal with a Langdon nudge and, with Narberth desperately defending their try-line, fellow prop Gareth Lloyd took full advantage of a charged down kick to score and Langdon again converted.

The Blacks were buzzing and the back row of the outstanding Alun Jones, No.8 Jacob Blackmore and Owain Morgan worked themselves to a standstill just as a Neath unit should in opposition to the lively Narberth trio led by skipper Richard Rees, Guto Davies and Tom Powell.

Behind them, halves Nicky Griffiths and David Langdon directed affairs admirably and centre Ben Atkins repeatedly caught the eye with his strong running, range of passing and solid defence.

Fuelled by a good stream of possession from their eager forwards, the Neath backs were looking sharp, making all the running. Had two or three passes out of the tackle not missed their intended destination, Neath might have added to their score for wingers James Roberts and Grabham nearly got away several times and Neath forced three close-in lineouts but lacked the accuracy to repeat their early try-scoring effort.

An unfortunate clash of heads saw Neath deprived of emerging hooker Morgan Thomas and Narberth lose lineout ace Alix Jenkins. His replacement Ryan Williams was carded in the 50th minute but, although both teams showed a willingness to play, the game rather lost its flow in a tit-for-tat second-half when Narberth gave as good as they got.

The Blacks fully matched them but incurred too many penalties and flipovers and consequently had to defend too much. And that defence was solid enough, repelling Narberth until the 65th minute when there was an air of good fortune about the home side’s sole try by winger Ryan Scourfield which outside-half Jon Rogers converted.

The Neath bench was fully deployed and it was good to see Iestyn Morgan playing his first game of the season and soon contributing with a lengthy touch-finder. Debutant hooker Morgan Hughes was energetic as was fit-again lock Ross O’Connor who took over from the hard-grafting Sam Langford and Neath loyalists were greatly cheered by a third successive victory and the display – it was a worthy win against a good Narberth side but next is another tough one at Ystrad Rhondda where Neath’s improvement needs to continue. 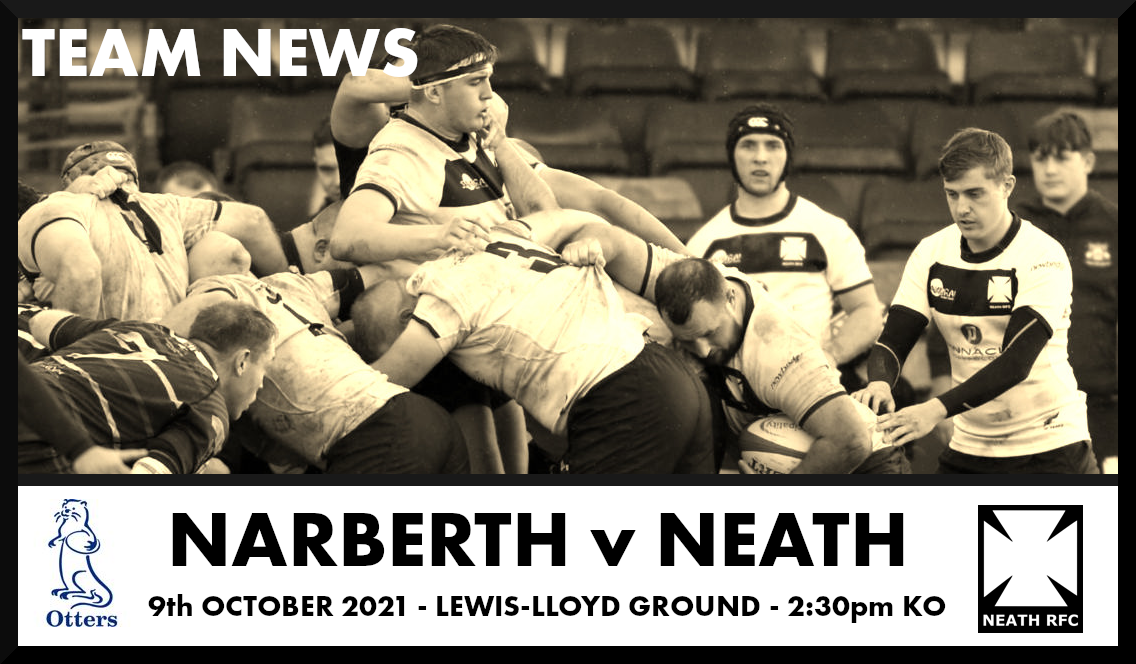 TEAM NEWS
After last week’s interlude due to Coronavirus, Neath RFC are pleased to be back in action on Saturday at Narberth (kick off 2.30pm) in the second phase of the WRU Championship Cup.

The starting line-up is, as expected, much-altered from that which won at Bryncethin (36-nil) a fortnight ago and, despite a few non-availabilities, the rotations make it more akin to that which defeated Tata Steel (36-20) the previous Saturday.

Behind the scrum, Aaron Bramwell takes over at full back with Aaron Grabham and James Roberts on the wings. Ryan Evans is back at centre alongside Ben Atkins while David Langdon and Nicky Griffiths team up at half-back.

Gareth Lloyd, Morgan Thomas and Tim Ryan will be in the front row with Sam Langford and Jon Barley packing down in the boiler-house and the back row comprises flankers men Alun Jones and Owain Morgan with Jacob Blackmore at No.8.

Fit-again Iestyn Morgan eases his way back from the replacements’ bench with Macauley Griffiths, Ross O’Connor, Jack Powell and Morgan Hughes on permit from Tondu.