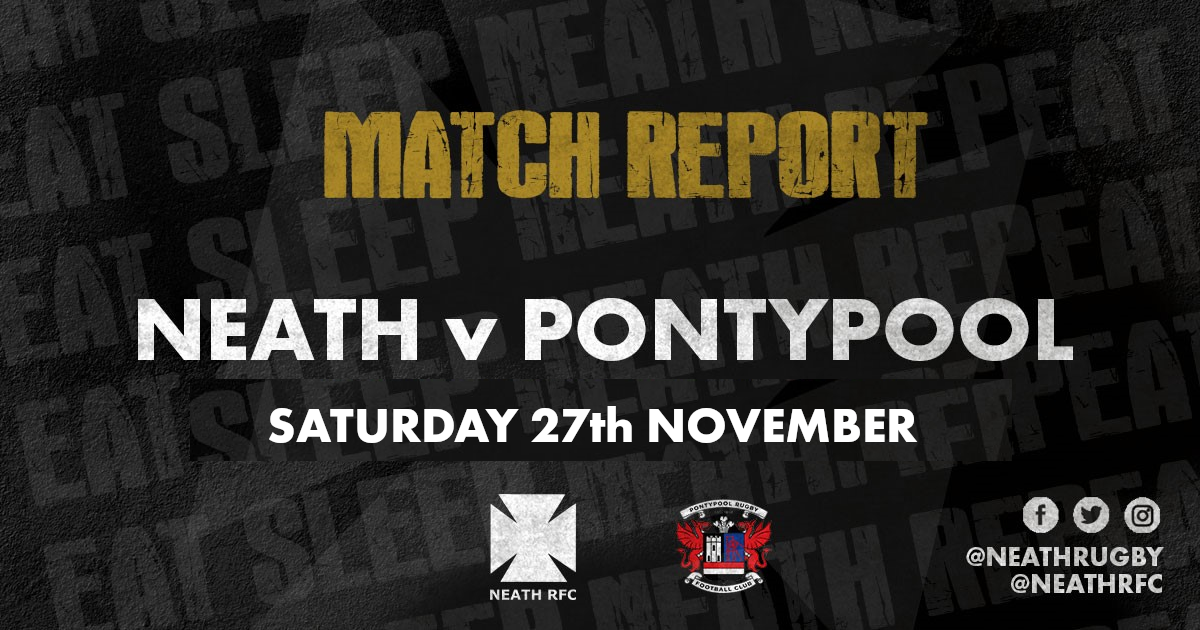 Storm Arwen might not have hit South Wales quite as hard as expected but its gusts blew away Pontypool’s magnificent 64-match winning run which was ended by a Neath team which fought hard for the jersey and for each other to the final whistle.

9-3 might not be the most royal of score-lines – especially for a Neath side averaging over four tries per game – but it will live long in the memory as one of the great Welsh club battles scrapped over by two willing teams intent on restoring their clubs’ fortunes.

the strong, cold wind made life difficult for both sides in a game of high intensity. As the scoreline suggests it was a near-run thing; no tries – but still exciting, indeed intriguing.

Playing with the wind, Neath showed their intent from the start and were rewarded after just two minutes when outside-half Steff Williams – already a centurion this year – kicked a penalty to carry the Blacks passed 400 points for the season.

In a game that was to be almost devoid of chances, ever-dangerous wing James Roberts came close to getting the game’s first try but he was unable to collect the ball in the Pontypool 22 with the line at his mercy. Pontypool enjoyed a lot of possession and visiting outside-half Keiran Meek levelled affairs with a penalty on 27 minutes.

Neath were twice reduced to 14 men following a couple of technical sin-binnings – in this, they were a little unlucky to be the only side to suffer as there was a keen contest throughout at the tackle area.

Pontypool were fortunate to escape punishment when wing Aaron Grabham’s neatly-placed kick into the 22 was followed by him being shoulder-charged and unable to pursue it – evidently someone had crossed the referee’s line of sight.

But just before half-time, Neath regained the lead when Williams banged over his second penalty although 6-3 did not appear to be enough with the wind to face.

Still, Neath started the second-half strongly. Attacking with pace and intent, they took the game to Pooler and up stepped Williams to land his third penalty to make it 9-3.

There was still only one score in it and thereafter it was mostly Pontypool attacking but unable to make much headway against the lock-tight Neath defence which has improved considerably since the first tenative post-Covid steps of high summer.

No names shall be singled out for every man played his part – a tackle here, an assist there, a scrag, a steal, a vital intervention or just being part of a well-organised line.

As the excitement mounted, supporters were quick to urge their side on. Pooler tried desperately to vary the point of attack but Neath’s defence held firm.

One last penalty award carried Pontypool to the corner for an attacking lineout but Neath – showing all the gritty cussedness of their forebears and giving it all they had – prevailed, the final whistle blew and the prize was theirs.

Many had tried to take it; all had failed. Pontypool were gracious in defeat – never fear, they will still be up there come the end of the season as they have too much quality.

The immensity of Neath’s achievement should not be under-estimated. After all Pontypool’s 64-match run stretched back to March, 2017 and more than one Neath supporter had tears of pride and joy in their eyes at the end – it was that kind of performance… and those who missed it will long regret it !

But, while taking confidence from this victory,  All Black feet will remain planted firmly on the ground.

With their own winning run now extended to 9 games, Neath must use this display as a building block, a starting point – and the Blacks realise that they will have another strong challenge next Saturday at Trebanos.