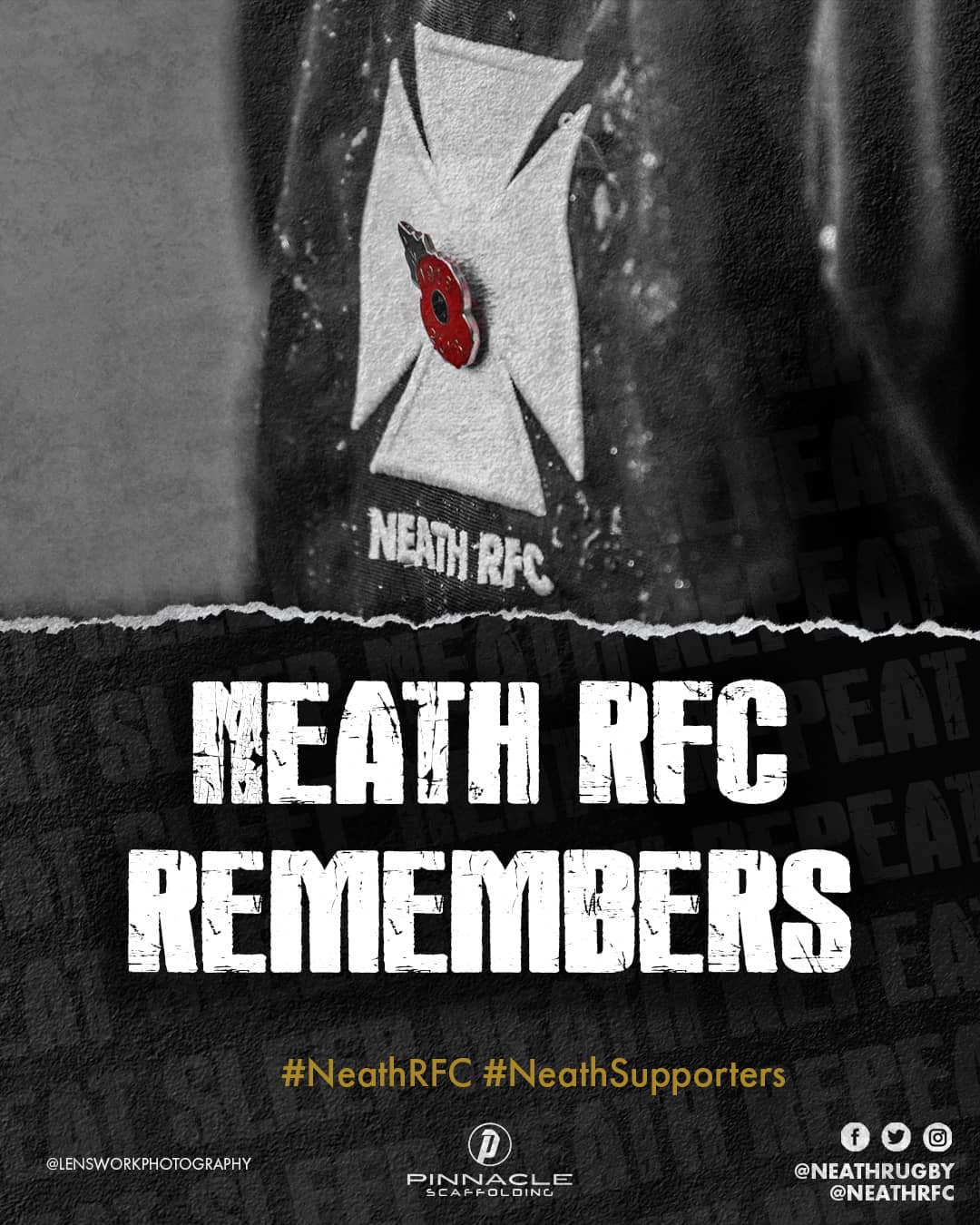 As the country pauses to remember and honour its war heroes, it is appropriate to recall Neath’s rugby fallen.

Private CHARLES MORRIS from Melyn played at half-back for Neath and served in the South African war. Charlie Morris joined the Royal Welsh Fusiliers on the outbreak of War and was killed on December 12, 1914, aged 34.

2nd Engineer LEWIS JENKINS from Skewen played for Neath at outside-half between 1900 and 1905. He later joined Swansea. He was lost when the “Tangistan” was sunk in March 1915.

Cpl. TOMMY JONES was an outside-half who worked at Main Colliery, Bryncoch. He served in the Boer War and was lost in the Gallipoli campaign. His death on August 8, 2015 is recorded on the Helles Memorial.

Capt. R.G.S. (Reg) BROWNING was a Neath 2nd XV forward who met his death serving with the Welsh Regiment at Loos on October 2, 2015.

King’s Serjeant JOE DAVIES D.C.M. of the Rifle Brigade was a collier in Seven Sisters and he also played for Resolven at forward. He won the French Military Cross and the D.C.M. in August 1915 for bringing in the wounded but was killed in action in France in February 1916.

Captain C.L.S. BRANFILL – Capel Lisle Aylett Branfill of the Glamorgan Yeomanry died of pneumonia in Cairo on May 11, 1916. Home for Christmas in 1910, the Old Harrovian played once on the wing for Neath against Llwynypia after assisting London Irish against Neath the day before. His grandfather J.B. Branfill was one of Neath’s earliest players in the 1870’s. The family home was in Clydach and he sometimes played for Pontardawe during holidays.

Private ROSSER D. ROSSER did not play for Neath but was secretary of the Neath Thursdays and so played a part in the development of several All Blacks. He served in the King’s Own Shropshire Light Infantry and was killed at on the Somme on July 14, 1916 and is remembered on the Thiepval Memorial.

Sapper BILL BEYNON of Skewen who played a handful of games on the wing in 1903 was killed on November 18, 1916. He was aged 36 and was serving with the Royal Engineers.

Sgt. Major TOMMY OWEN was a diminutive wing who hailed from nearby Resolven. He won a place in the Neath team in 1911/12 when he became a regular try-scorer and he featured for the next two seasons often alongside former Resolven team-mates Dai Parry, Edgar Thomas and Reg Stroud. When war was declared, he enlisted in the 9th Battalion of the Welch Regiment and rapidly earned promotion to the rank of sergeant-major where he displayed all the leadership qualities expected of a Neath player. He was killed at Messines on June 7, 1917 at the age of 24. When rugby resumed after the War in February, 1919, Owen’s pre-war skipper Fred David took a Neath XV to play Resolven in a memorial match for Tommy Owen which served as a fund-raiser for his family.

Private T.O. JONES was a Neath and Glamorgan County winger who went north to Oldham R.L. In December 1913. Originally from Treorchy, he lost his life on September 20, 1917, aged 30.

Cpl. TREVOR BENSON was a wing who joined Neath from Swansea and played 10 games in 1902/03. He had been in German East and West Africa for 13 years but returned home and enlisted in the Middlesex Regiment and was killed by a bomb dropped from an aeroplane on September 27, 1917, aged 37.

Sergeant DICK HUGHES D.C.M. of the Somerset Light Infantry, a long-time All Blacks supporter, was killed at Cambrai on November 30, 1917. He was the first Neath man to win the D.C.M. for “sniping the sniper” when he shot a German who had taken a heavy toll on his comrades.

Rifleman REES HILL of the Rifle Brigade died on December 11, 1917, aged 29 and is buried at Ynysymaerdy Cemetery. He captained the Melyn Barbarians side which defeated Neath Abbey 14-nil in the Neath & District Cup final at The Gnoll in 1914.

Lt. JAMES MORRIS of the Glamorgan Yeomanry was an occasional wing three-quarter who was on attachment to the Welsh Regiment when he died in Palestine on December 27, 1917. Jim Morris was rugby captain at Neath County School and scored a try on his Neath debut against Glynneath on September 6, 1913.

2nd Lt. JACK GRIFFITHS was a full back who appeared for Neath in 1913/14. He played most of his rugby for Neath YMCA and was a prominent playing member of Neath Cricket Club too. He was killed in action on May 2, 1918.

Capt. Adj. TOM POWELL was a Neath forward of the 1890’s who went on to serve in the Boer War. In the Kaiser War, he initially served with the Oxford & Bucks. Light Infantry but had been promoted Captain-Adjutant in the Royal Irish Regiment. After being wounded in France, he was hospitalised in Dublin and died on July 1, 1918 and is buried in Grangegorman Military Cemetery, Dublin.

2nd Lt. GWILYM JONES was a three-quarter in the Neath championship-winning teams of 1909/10 when he scored 9 tries and 1910/11. He also played for Pontypridd, Cardiff, London Welsh and represented Glamorgan County alongside Neath forward T.C. Lloyd against the 1908 Australians. A schoolmaster, he was reported killed in action on September 11, 1918.

Sgt. DAVID DAVIES joined Neath from Morriston in 1901/02 and scored 14 tries from the wing in 26 appearances before departing for a teaching post at Mountain Ash where he also played. He died of wounds in September, 1918, aged 36.

Private WILLIAM JARRETT of Cimla, aged 40, had played at forward for the 2nd XV which reached the final of the South Wales Challenge Cup in 1901/02. He won the Military Medal at the Battle of Amiens in August, 1918 but was wounded and repatriated but he died of his wounds on October 29, 1918 and is buried in Llantwit Cemetery, Neath.

2nd Lt. FRED PERRETT was an outstanding forward who joined Neath in September 1912 after impressing briefly for Briton Ferry. His talents earned him instant recognition as, after just a handful of games for Neath, he was catapulted into the Welsh XV that lost 3-6 to South Africa on December 14th and three days later faced the tourists again as a member of the Neath team that ran the tourists close before losing 3-8 at The Gnoll. After playing in all four of Wales’ internationals that season, he went north to Leeds and later joined Hull. Promoted to the rank of 2nd Lieutenant in the Royal Welch Fusiliers, he was injured in one of the last battles of the conflict. He died of his wounds, aged 27, in France on December 1, 1918 – twenty days after the guns fell silent.

D.M. (DAVID MORGAN) EVANS was a mobile, versatile forward who joined Neath from Glynneath. He soon established himself as a key member of the immensely strong Neath packs of the 1930’s and figured in the championship side of 1933/34. He played in a Welsh trial but, disappointed at being overlooked for his cap, took the well-trodden path north and joined Huddersfield R.L. During the Hitler war, Evans joined the Royal Navy as a stoker and was lost when HMS Hood was sunk on 24th May, 1941.

Another player who appeared occasionally for Neath before the war was CRAD DAVIES who was a centre from Cwmgwrach. He served in the Welch Regiment and died aged 29 in Germany 1945 and is buried in Munster.

Supporters should remember these heroes who made the ultimate sacrifice.

* If anybody is aware of any other Neath players who gave their lives in the conflicts and whose names should be included in this tribute, please contact me via the Club.