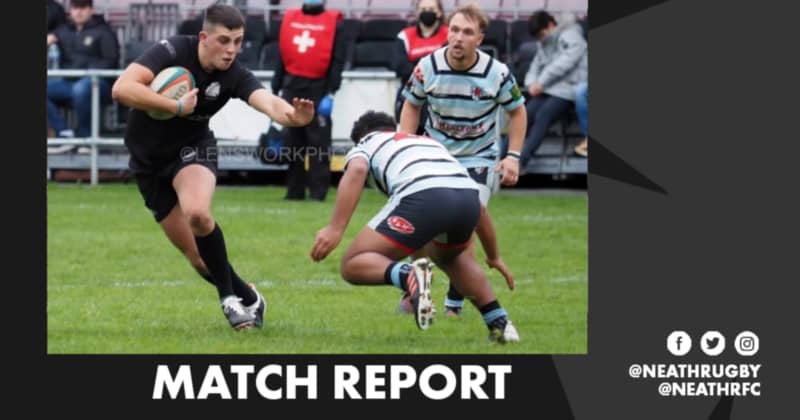 Neath recorded their fifth consecutive win, scoring six tries in the process, to overcome a young Glamorgan Wanderers side at The Gnoll.

After a minute’s silence in memory of ex-prop Mike Griffiths, the Blacks wasted little time in opening their account and they did so in the most spectacular fashion. No.8 David Griggs burst away from his own half and excellent support play by the ever-present Alun Jones and Chris Morris saw full back Iestyn Morgan cross for his first try for Neath, Steff Williams converting superbly from wide out.

Ten minutes later, Neath doubled their advantage when a series of strong driving mauls saw hooker Morris claim his first try and Williams converted but midway through the half Wanderers hit back with a try by flanker Ryan Shallish.

Almost from the re-start, the faultless goal-kicking of Steff Williams saw Neath add a penalty to make it 17-8 but Wanderers kept Neath at bay for the remainder of the half although winger Jon Bayliss was denied a likely try by a bad bounce and fellow wing James Roberts threatened too.

On the resumption, Neath were soon on the scoreboard again with a second try by new hooker Chris Morris – if his first try was the result of champagne rugby, this was more best bitter stuff as he ploughed over from close range at the posts affording Steff Williams his third and easiest conversion.

Thereafter, Neath scored regularly at ten minute intervals but sometimes there was too much lateral running which had the inevitable effect of squeezing the space for the outside runners.

Wanderers have some good young players, among them Alfie Llewellyn – son of former Neath great Gareth who was at his old hunting ground to cast an eye over his prowess. Hooker Dan Watts competed and the giant Adrian Cox obviously has potential.

As for Neath, nearly every player had his moments and far tougher challenges lie ahead  but afterwards the side were critical of themselves that they did not score more – a good attitude to have !

Neath’s fourth try came after another powerful forward drive off a lineout, referee Mr. Simon Mills playing a good advantage, and scrum-half Macauley Griffiths stole away to score in the right corner – wide out it may have been but the conversion presented no difficulty for Steff Williams’ conversion.

Replacement lock Sam Langford tidied up poor lineout possession to put Neath on the front foot and, stretching the defence one way then the other, the Blacks were rewarded for their patience with a fifth try by polished centre Ryan Evans which was promptly followed by Steff Williams’ fifth conversion.

Neath emptied their bench with scrum-half Nicky Griffiths sparking a number of promising moves while props Gareth Lloyd and Kelvan Ashby enjoyed themselves in the thick of the action too and it was no surprise when Neath signed off with a sixth try.

Lock Jon Barley, showing greater presence in the last two games, had been winning some good top of the lineout ball and his work was taken on by the forwards, Russia-bound referee Mills again playing a good advantage, and flanker Alun Jones touched down for Neath’s final try, Steff Williams unerringly converting for a 15-point match haul.

After three rounds, the WRU Championship Cup takes a break now until January 15 when Bargoed (who lead Neath by a point) visit The Gnoll; two points from their last two difficult games could see Neath heading for the Millennium Stadium in April.

More urgently though, Neath now begin preparations for the start of the League season proper at Narberth on November 13 and will have an additional game at Mountain Ash on Thursday, November 4th (kick off 7.15pm).