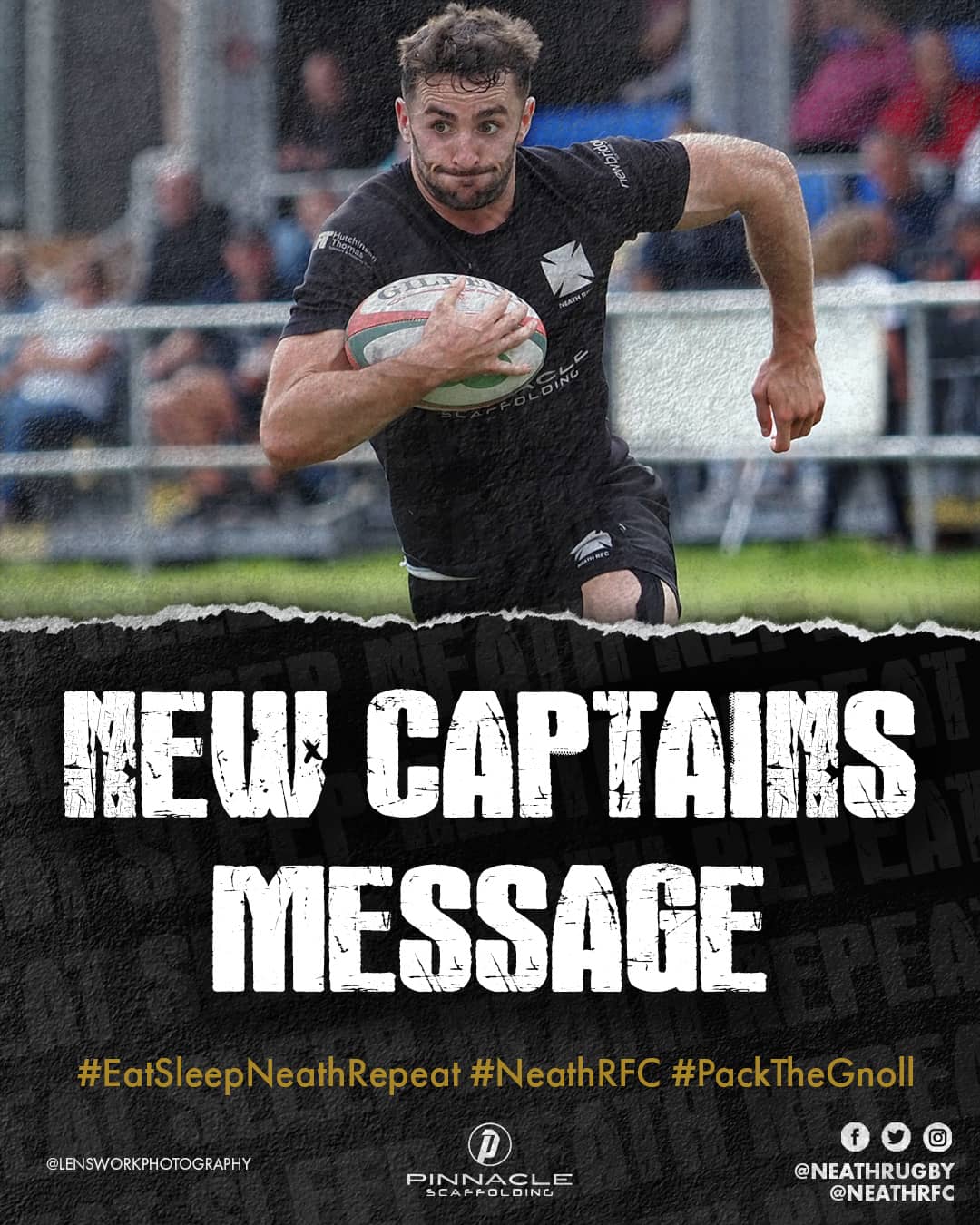 Neath are top of the WRU Championship table but, in a message to supporters, new captain Ryan Evans insists the team will not be getting ahead of itself – far from it, in fact, with just 5 games of a 26-match programme completed.

Firstly, I would just like to say what an honour it is for me to have been elected captain of this wonderful Club of ours for 2022/23.

Having been brought up in the Town – Bryncoch originally, now living in Skewen – I am well aware of what Neath RFC means and I’ll be doing everything I can to get us back to where we belong.

Succeeding Brams is no easy task as he has shown tremendous commitment to the role but I am glad that he is still be around for us as well as doing his work with the Under-15’s and Under-11’s.

During the summer, it was good to get in a full but very tough pre-season. Following the successes of last season the squad all felt that with an extra fitness edge we can do even better.

We were all glad therefore to have Idris back to help and push us through our conditioning – what we did not know was that the summer would be one of the hottest on record !

But the boys coped well and overall I’d say fitness levels are up – and this will hold us in good stead as the season progresses.

Supporters have already seen that we want to play the fast-paced game The Gnoll encourages and training has been competitive with players returning and some new faces all keen to add to the mix and help spear Neath forward – onwards and upwards.

We are lucky in having our experienced off-field team who miss nothing and plan accordingly – our superb prep for the Cup Final last year being a case in point as was hitting Ebbw Vale pre-season as prep for Bargoed.

The Championship is a tough Division – Pontypool and Bargoed will be up there and all clubs are competitive and we know we need to be at our best EVERY game.

With two promotion places available, we knew that a good start was all-important and YOUR vocal support from the stands and terraces has helped and is appreciated.

The pre-season games were ideal as we needed to test ourselves against top opposition and I felt we did well to match Ebbw Vale in most parts.

Crymych was a great day out which did wonders to settle in the new boys and it raised over £11,000 for Ifan Phillips too. It showed what Neath RFC is about.

Then came Swansea (I missed due to a wedding) when we scored 5 tries against Premiership opponents which spoke volumes and showed we can unlock defences.

So we were well prepared for the start of the League and to get a bonus point win over Bargoed was brilliant.

We could have done with the Cross Keys game being played as we are still settling down as a side but another bonus point win over Bedwas confirmed the progress we have made.

Everything (bar the result) about the Pontypool game was great and with a bit more luck and better concentration we could have won it. Since then, we have scored tries without really clicking against Narberth and Trebanos.

We will not be getting ahead of ourselves though as a lot of work remains to be done.

There are some simple things I want us to improve upon immediately. The first two are discipline-related : we must stop giving away soft penalties when the ball is lost and the other is no back-chat which is not clever – improve our discipline, improve our record.

Finally, we really must start games better. We have had to come from behind to win our games and it will come back to bite us if we don’t.

We are improving our own game with plenty of hard running and we need to be accurate, clinical and direct.

We are playing good, attractive rugby so please keep supporting us – and bring along your friends.

Beddau will be tough on Saturday as they have had some good results against the top teams and won convincingly at Ystalyfera on Saturday.

The more support the merrier – and it will help us along !