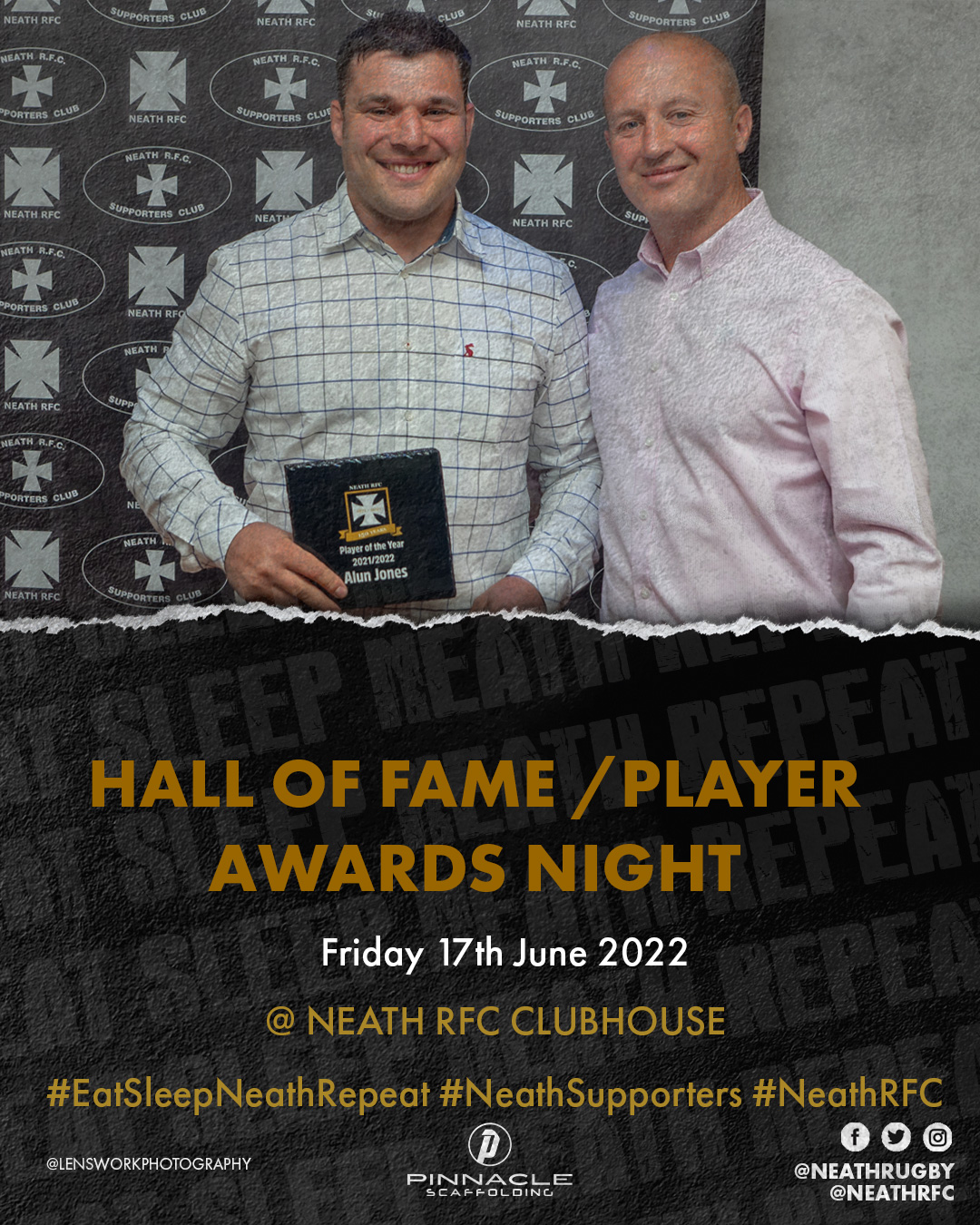 Around 120 supporters were present to enjoy the evening which embraces the present generation as well as the past Welsh All Blacks.

He gave his slant on the past season 2021/22 which, despite the difficulties of the pandemic, produced concrete achievement for the Blacks who finished second to Bargoed in the WRU Championship and beat the same opponents in a thrilling Principality Stadium final to carry off the inaugural WRU Championship Cup – 50 years on from Neath’s winning the first WRU Cup.

All told, Neath played 29 games (probably more than any other club in Wales other than student teams) which underlines the club’s commitment to playing the Game although Lyn Jones later recalled that he played 43 out of 45 games in his first season 1982/83.

Neath won 22 of those 29 games, the heaviest defeat being by a mere eight points in the first game of the season – which speaks volume for the character and resolution of the present-day All Blacks.

The Neath Rugby Supporters’ Club Player of the Year was jointly awarded to top points scorer outside half Steff Williams and prop Tim Ryan by stalwart supporters John Thomas and Vince Prout: 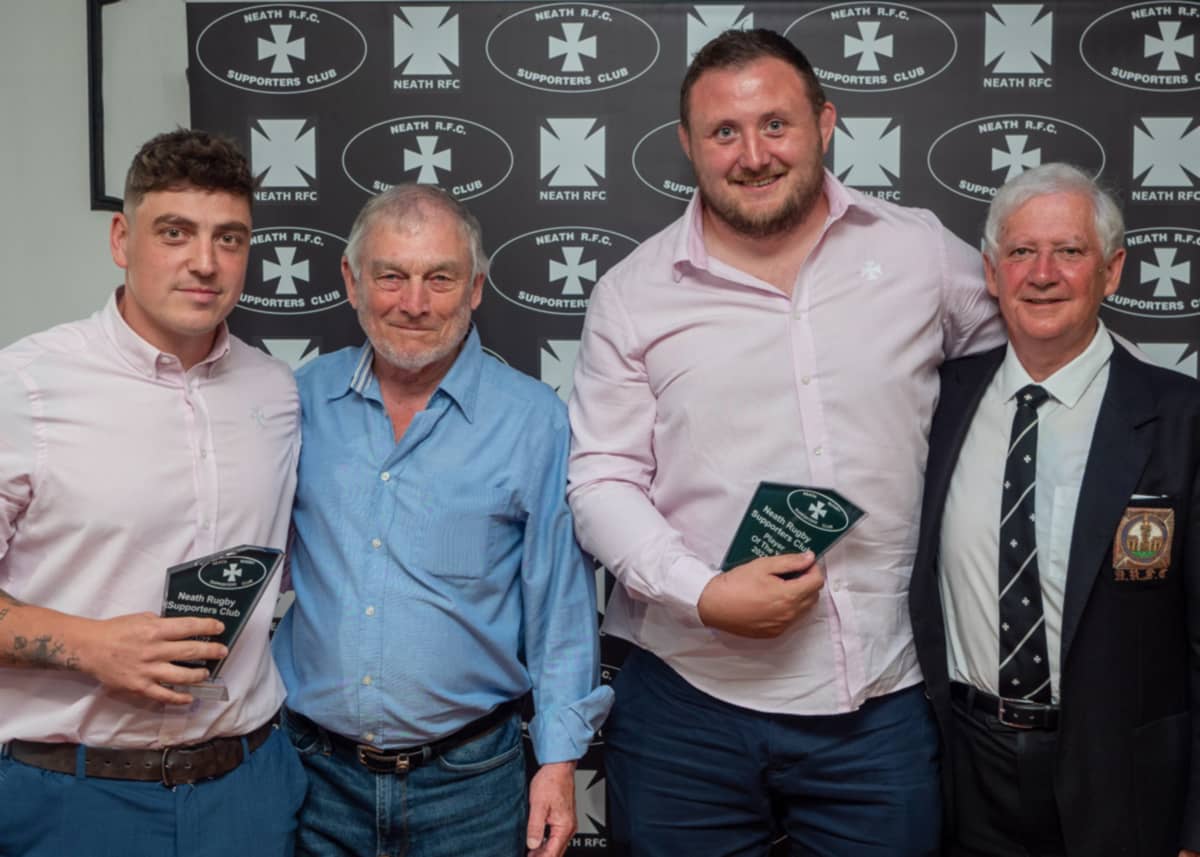 Coach Patrick Horgan presented the Club Player of the Year award to flanker Alun Jones who was a model of consistency, excelling in the ‘big’ games and captain Aaron Bramwell made awards to the team’s coaches Patrick Horgan, Andrew Howell and Tim Ryan as the evening reached “half time”.

An excellent buffet was served ahead of the “Hall of Fame” inductions and, kicking off the “second half”, Mike Price paid tribute to ten legendary Neath RFC figures from the distant past whom the Supporters Club had nominated for Hall of Fame admission during the two seasons afflicted by Coronavrus.

He said that although all are long passed, it was entirely appropriate that the ten should have been added to the Hall of Fame Honours Board by the Supporters Club in the Club’s 150th Anniversary year, to join the previous inductees :-

The 2021/22 inductees Randall Davies, Norman Rees, Martyn Morris, Huw Richards and Lyn Jones were then introduced in turn and elevated to join the elite band of Neath RFC legends and they kept the audience splendidly entertained with tales of yore coupled with sage advice for the current crop: 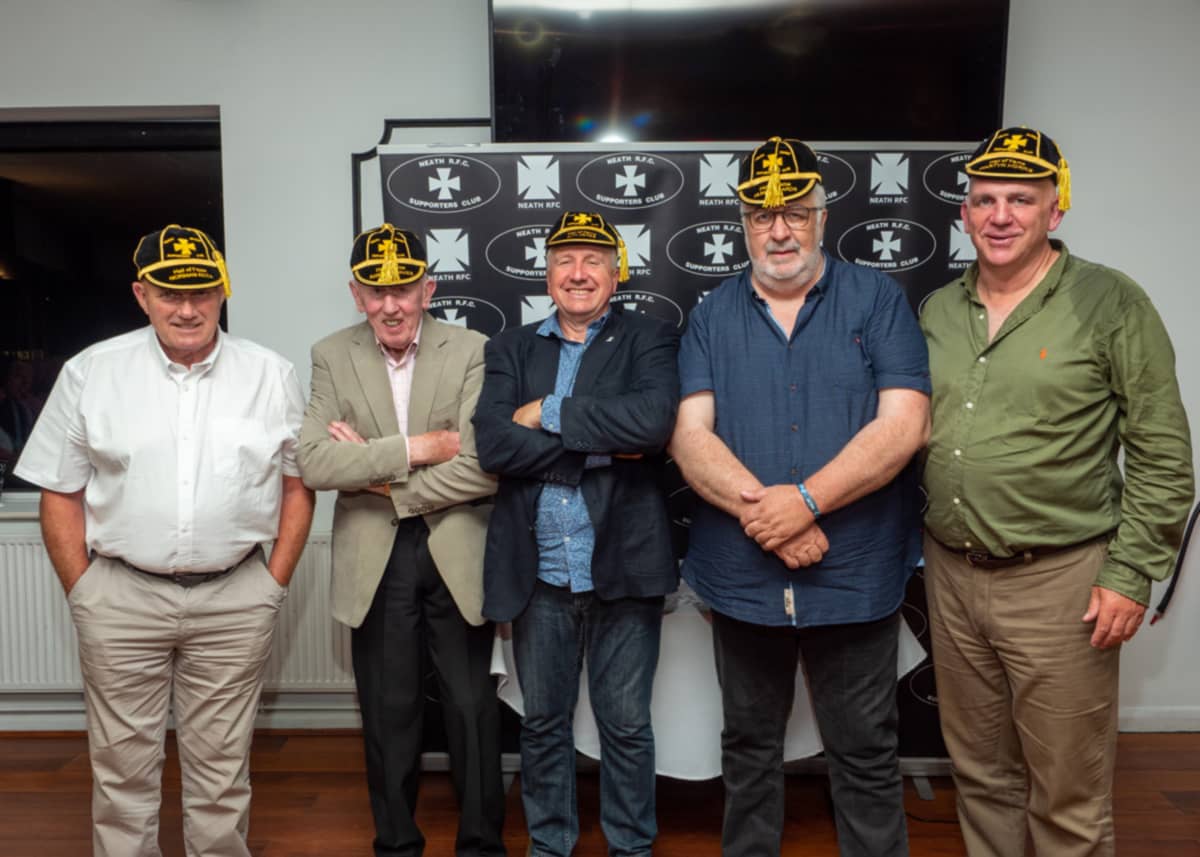 Nostalgia may – or may not – be what it used to be but the speeches, anecdotes and general good fun characterised a classic evening which firmly illustrated the fact that Neath RFC is alive and well and hopefully on the right track again.

NRSC chairman Len Kowalski, vice chairman Dawn Williams and Paula Thomas are to be congratulated on co-ordinating another wonderful evening which fully carried on the best traditions of this unique event.