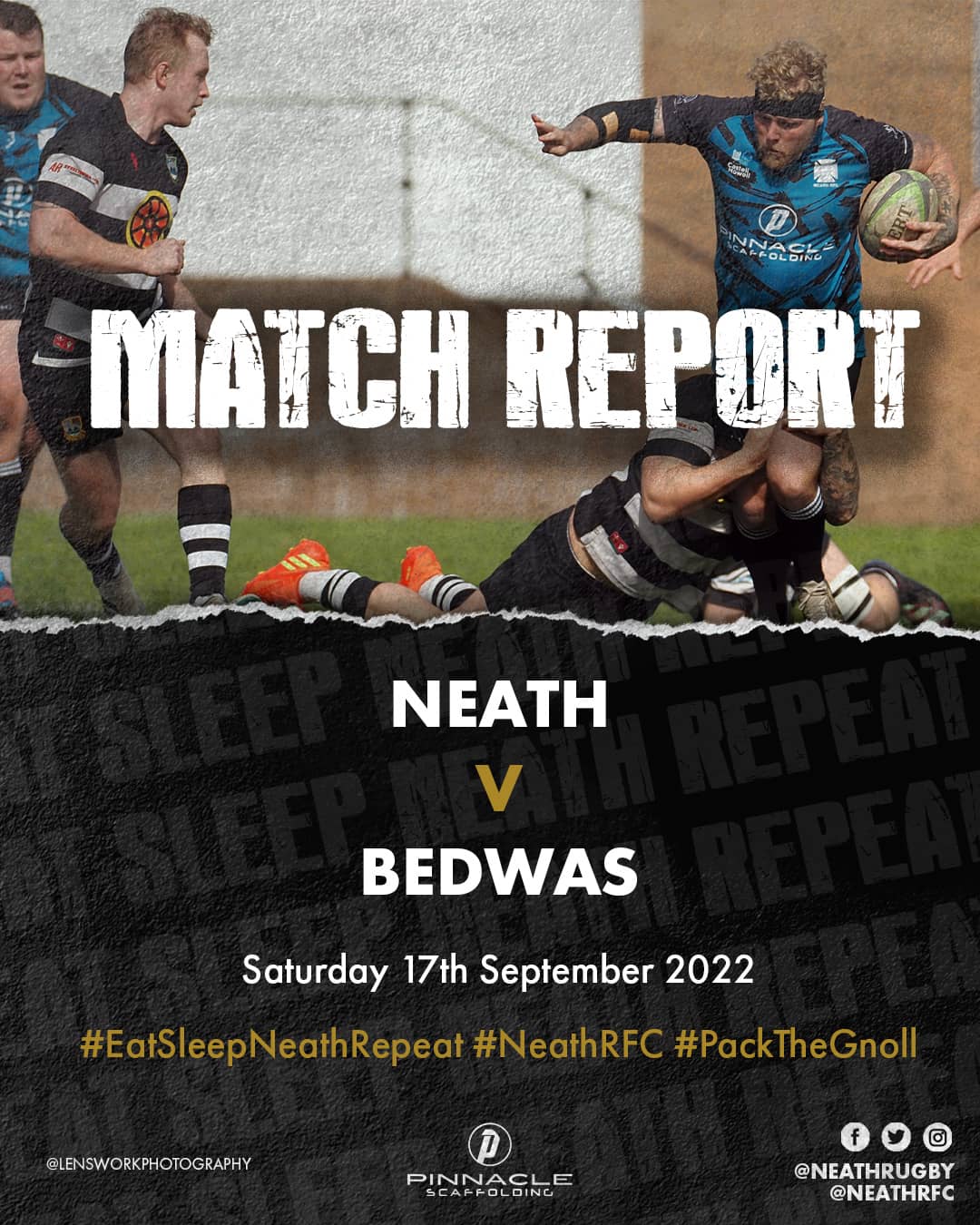 Three tries in each half – six in all – saw blossoming Neath to a convincing victory over Bedwas who scored with the last move of the game at The Gnoll.

The Blacks only lost two league games last season – one of then was at Bedwas where they went down 30-36 although David Griggs scored a perfectly good last gasp try when the referee’s view was impeded and a straightforward conversion would have won it.

A warm, sunny afternoon greeted the sides and another decent crowd who stood in silent tribute in memory of the late Queen Elizabeth II.

It was perfectly observed but the solemnity was soon set aside as Neath welcomed back their former Wales international wing Aled Brew and referee Mr. Stuart Kibble (Llandaff North) set play in motion.

Once again though, Neath started slowly – and they need to start better than they have been doing.

This time, 6 of the game’s first 7 penalties went against them. Fortunately for Neath, the odd one was goaled by Steff Williams who was recovering from minor surgery.

His kick gave the home side a 12th minute lead and the outside-half was soon busy executing a couple of booming kicks to establish field position.

Midway through the half, hard driving by the Neath forwards softened up Bedwas’ resistance and pulled in the defence before a deft dink through by the returning Aled Brew led to skipper Ryan Evans getting in for the first try which Williams converted and the Blacks were in charge at 10-nil. 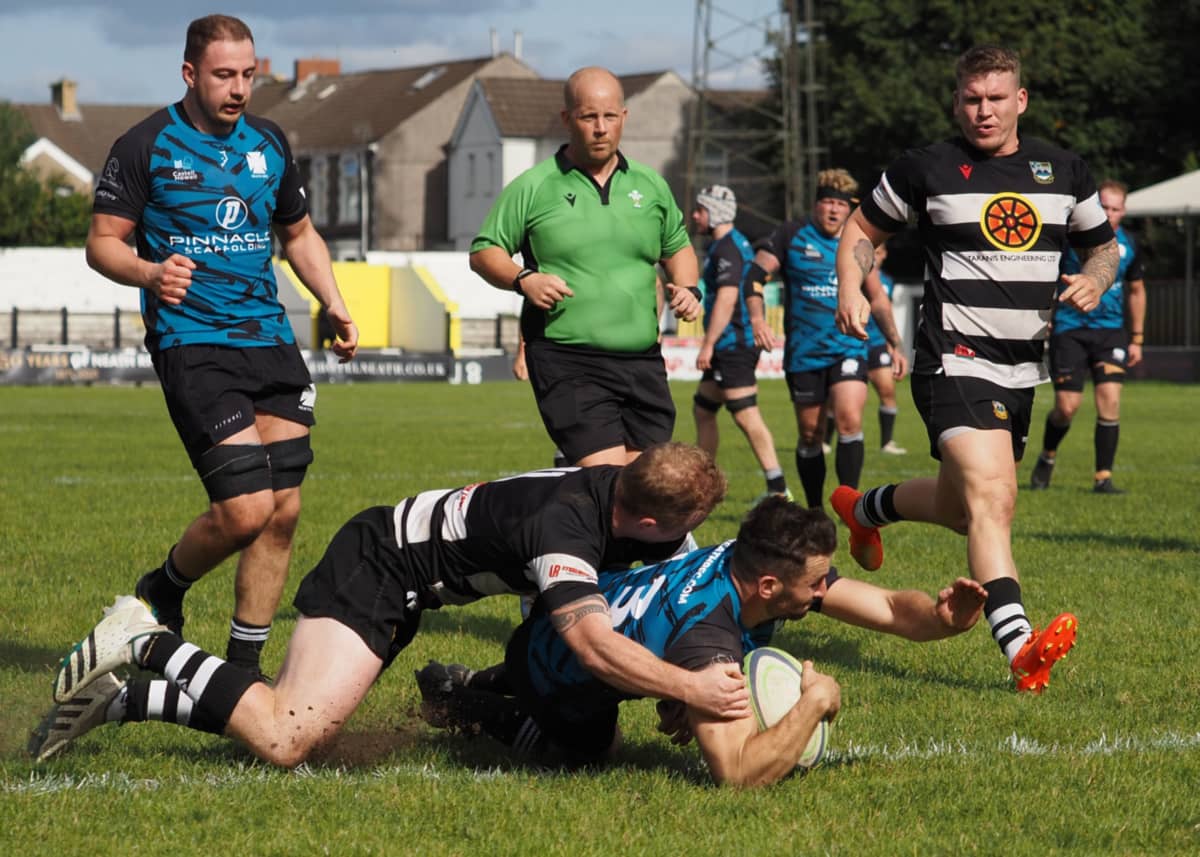 Away outside-half Lloyd Wilkins made a miserable attempt at a penalty but Bedwas rarely threatened and were comfortably repelled by the home defence; in fact, Bedwas’ biggest cheer from the good-humoured Gnoll crowd was reserved for the visiting touch-judge whose confusion caused much amusement.

Neath were controlling affairs and more clever play by Brew and full back Lewis Evans then sent skipper Ryan Evans racing in for his second try of the day which made it 15-nil.

And Neath might have had another when centre Ben Atkins was denied for a forward pass which was anything but in a lovely move involving Brew off the lively flanker Dyfan Ceredig.

But Neath were not to be denied and, swarming all over the Bedwas defenders, they caused panic-stations before the hard-grafting Blacks pack smashed their way forward with the impact of old.

Slick handling by the back-line led to full back Lewis Evans unselfishly putting in wing Ryan Griffiths for their third try and Williams’ conversion made it a well-deserved 22-nil to Neath at half-time. 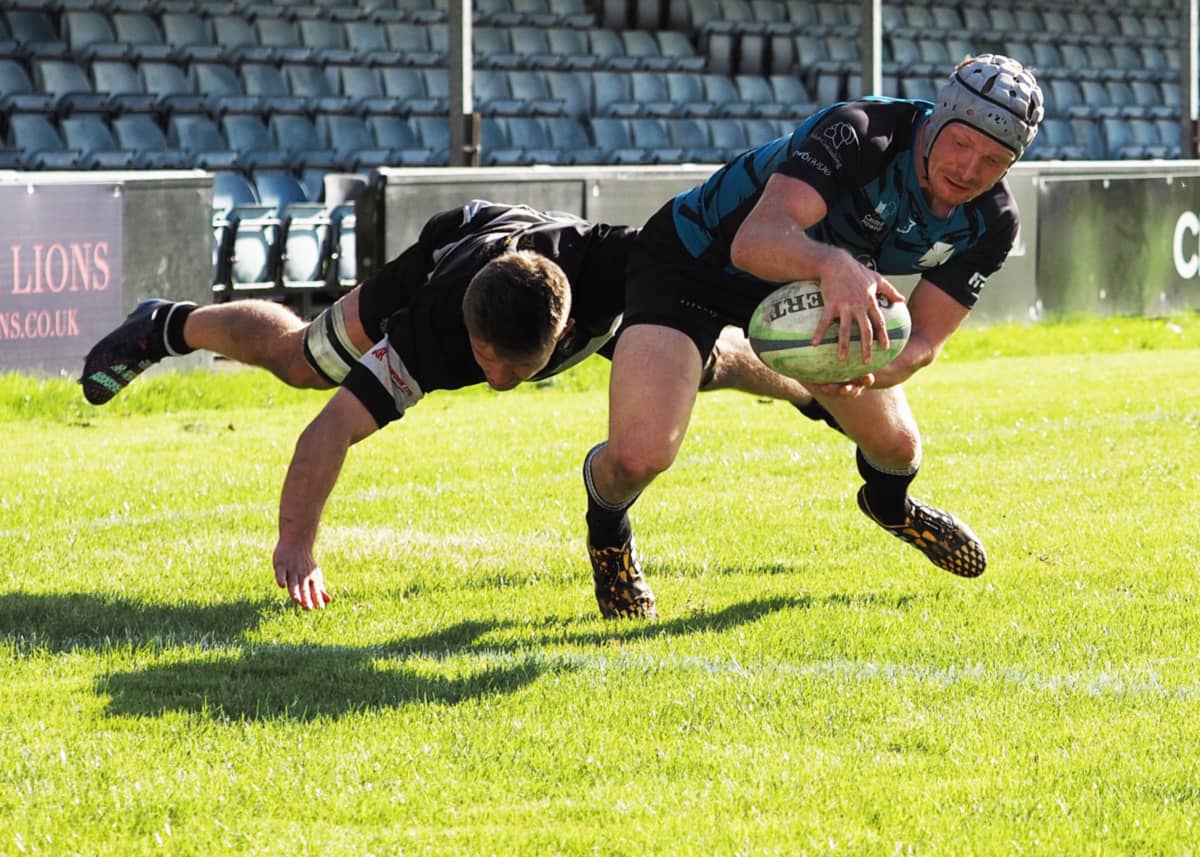 Neath kept up the storm after the break and a series of flowing attacks up the left flank ought to have produced scores – from the kick off, the Blavks switched play and Brew made progress only for Neath to be denied for a knock on when the ball came off Ceredig’s knee.

Then a golden opportunity was missed when the wide-roaming open-side tried to find Brew on the outside when scrum-half Macauley Griffiths had an unimpeded path to the posts.

Bedwas then had their only real chance of the afternoon when hard-working flanker Rhys Morgans was held up over the line by Lewis Evans and replacement Aaron Bramwell ere on 52 minutes Brew’s comeback was marred a little when he was sin-binned for a no arms tackle.

When play reverted to the Llantwit end, Neath turned the screw when lock Jacob Blackmore’s fine lineout work was capitalised upon by impressive hooker Josh Clark who dabbed down at the back of a strong maul for the fourth – bonus point – try and it was 27-nil.

With strong-scrummaging prop Gareth Lloyd on to bolster the forward effort, Neath added to their tally when more solid work in the tight by the formidable Neath eight gave the backs the opportunity to speed the ball across the line for the selfless Lewis Evans to send in his wing Ryan Griffiths for his second try.

Another rock-solid scrum saw determined No.8 Morgan Kneath dash and drive over the line for Neath’s sixth try, Williams’ conversion hitting the woodwork. 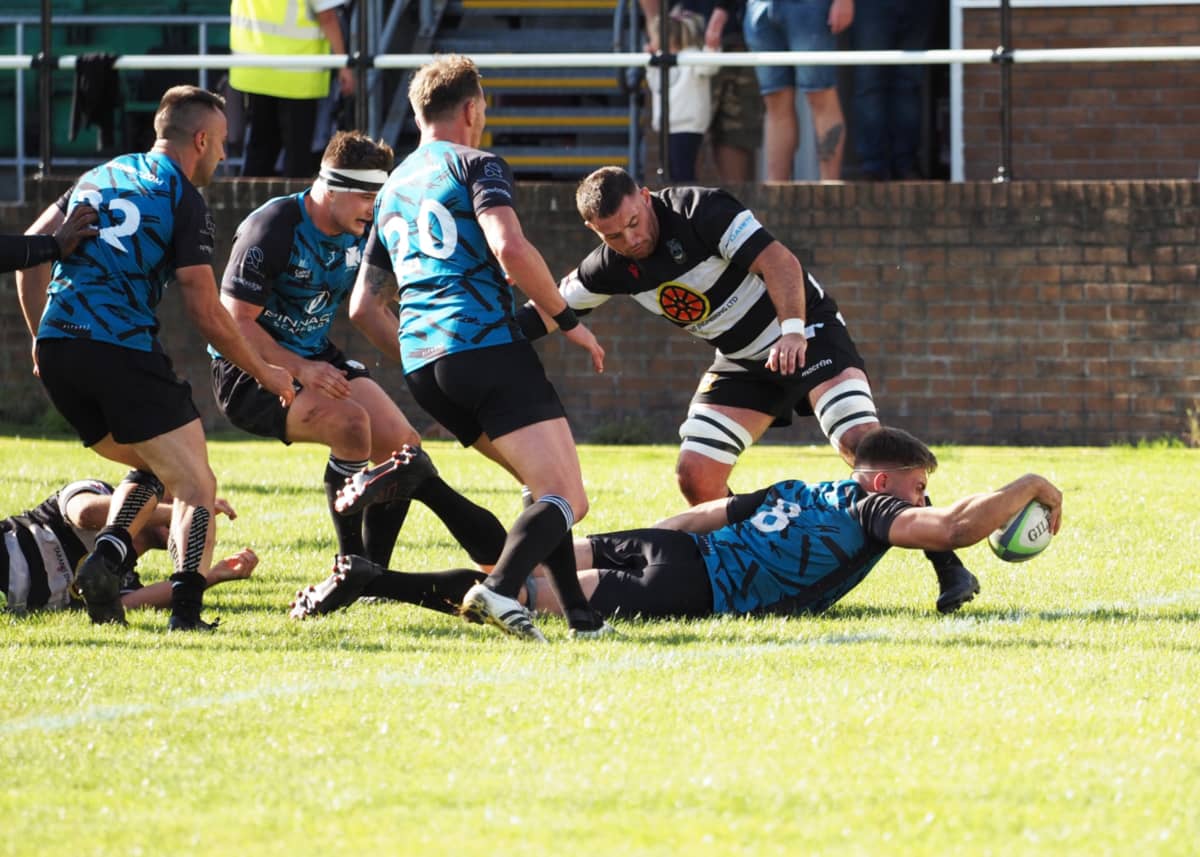 But, right at the death, with Neath seeking their seventh try, Bedwas – bashed, battered but broken not – seized the egg and visiting outside-half Lloyd Wilkins scored a spectacular length of the field consolatory effort which he converted to signal the final blast on the whistle.

It ended a good performance by the Blacks who continue to improve but can improve still further. They will certainly have to pull out all the stops next week at Pontypool where they must put the pressure on the home side in all aspects of the game throughout the 80 minutes and take their chances.