NEATH put a silver stamp on their 150th Anniversary season as a magnificent defensive display, augmented by a couple of sparks of attacking flair, earned a thrilling 16-13 win.

The Blacks, supporting each other like combat veterans, had to come from behind as they overturned a 10-point half-time deficit to overcome pre-match favourites Bargoed who might be left wondering where they went wrong. 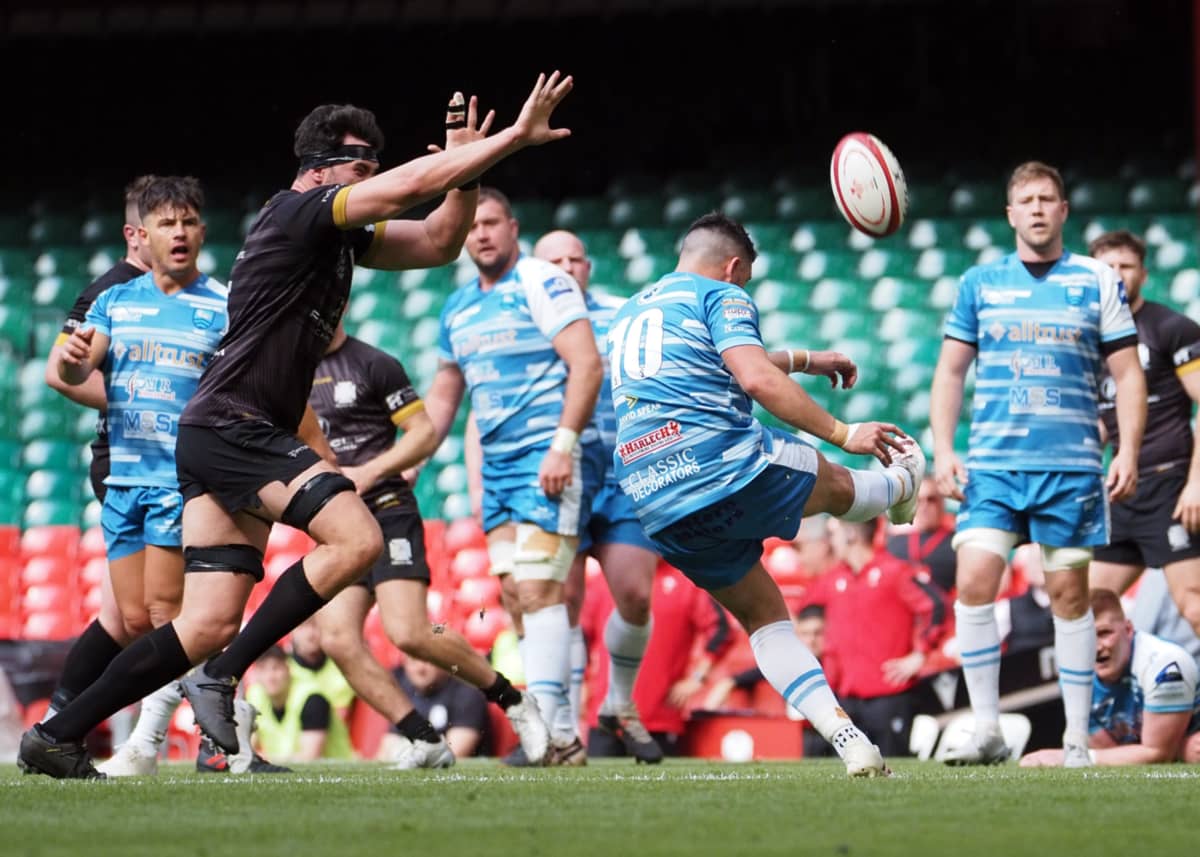 A catalogue of behind the scrum injuries severely hampered Neath’s preparation but the Blacks’ management had geared the squad – and it was the squad – for a big effort to give their long-suffering supporters reward after the Club’s troubles.

Some of those supporters were there 50 seasons ago to see Martyn Davies and the centenary-celebrating All Blacks lift the inaugural WRU Challenge Cup in 1971/72. Then it was a damp, cloudy day but this time the sun shone and so ultimately did Neath in a bruising, gruelling affair which shows why top Welsh club rugby football is so engrossing.

Neath took an early lead through a penalty by outside-half Steff Williams but Bargoed, splendidly led by Kieran Brown and his front row cohorts Wade Langley and Ali Gardner-Key, were setting the standard with some powerful play based on an aggressive, heavy-weight scrum and the strong driving of lock Geraint Edmunds and No.8 Adam Powell. 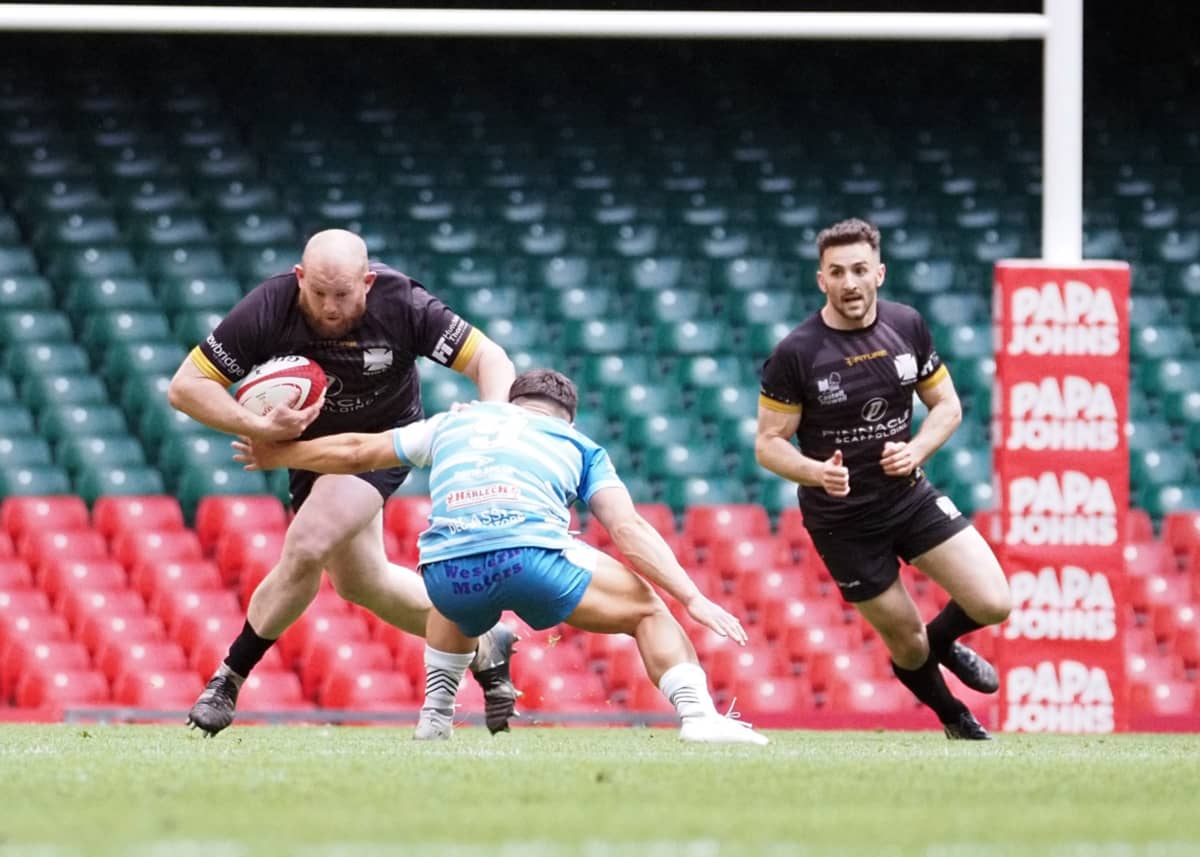 After centre Steff Jones missed a penalty, Bargoed deservedly went in front when scrum-half James Leadbetter, backing up intelligently on the inside, went through for the game’s opening try which Jones converted.

Scrum pressure forced a penalty to Bargoed and Jones took the three points and Bargoed extended their lead just before half time through another Jones penalty which sent them in at half time with a 13-3 advantage and it was hard to see a way back into the game for Neath.

And the pattern continued after the interval as the Blacks were on the defensive from the re-start as Bargoed maintained their grip. But Neath’s obdurate defence, shored up by a well-organised lineout, held firm and they relieved the situation briefly only for prop Tim Ryan to be yellow carded for repeated scrum offences.

Neath sensed a glimmer of hope when Elis Horgan launched a kick and chase from within his own 22 and he almost caught out the Bargoed defence but he just failed to gather a capriciously bouncing ball.

It was another break by man-of-the-match Horgan which helped produce Neath’s first points of the half fifteen minutes in. Neath clawed their way back to 6-13 when Steff Williams landed his second penalty and, as their sharper backs began to see more of the ball, the Blacks were beginning to look threatening.

And midway through the half, the game suddenly flipped. Centre David Langdon caught a loose kick and fed young replacement flanker Dyfan Ceredig who showed great passing skills and vision to free winger James Roberts who had popped on the opposite flank.

Once he got into his stride, there was no stopping the Cimla Express as he sped to the try-line, touched down and put Neath just two points behind at 11-13.

It was tense and it was tight in the Cardiff sunshine but Neath’s fresh, younger forwards were looking lively and, with six minutes remaining, the critical blow was struck as  Steff Williams, with parade-ground precision, looped Langdon in midfield and captain Aaron Bramwell passed not quite perfectly but perfect enough for winger Matthew Jenkins who shrugged aside the remaining defender to score Neath’s second try.

It was 16-13 with just five minutes to go and Bargoed threw everything they had left at Neath. But the Blacks were composed in defence where relieving line kicks by David Langdon and the limping replacement scrum-half Macauley Griffiths were crucial to the cause.

Neath held strong and from a scrum No.8 David Griggs scruffily kicked the ball into touch. Neath had won a battle royale by 16-13 and 23 elated players, squad members (fit and injured), coaches, medical and back up staff and, yes, even one “long-serving” secretary leapt in the air as the cheers of the Neath supporters echoed around the Principality Stadium.

Having lost close cup finals themelves, Neath could empathise with Bargoed who had been grand foemen – although fortunately this one did not rest upon anything like as controversial as Emyr Lewis’ “dropped goal that never was” in 1993.

Neath paid tribute to their opponents at the post-match function and captain Aaron Bramwell said: “Winning the cup means the world to me as a Neath boy, as it does to a lot of the boys, because we’re all Neath people. It’s credit to all the players, the staff and the coaching staff. They’ve been absolutely immense. We are re-building Neath RFC and this is the first baby step.”

Meanwhile, there was an air of quiet contentment among The Gnoll back-room on a good job done – a satisfaction which saw the team through its fantastic reception from supporters back at The Gnoll clubhouse and which lasted long into the early hours of Monday morning.
But it’s Tata Steel on Wednesday and the Saints will be eager to be the first team to topple the new cup-holders – so why not come along to The Gnoll (kick off 7.15pm) and give a cheer to the lads who are putting the pride back into Neath rugby ? 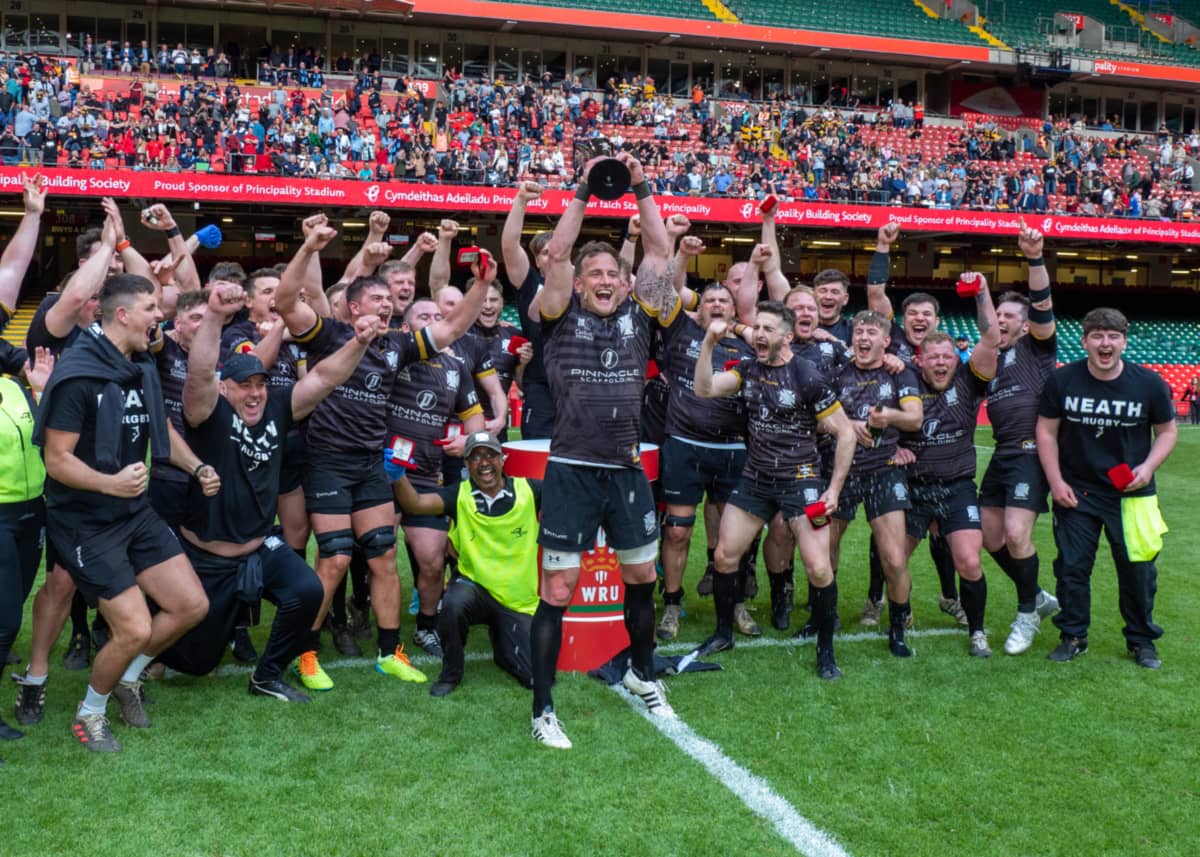 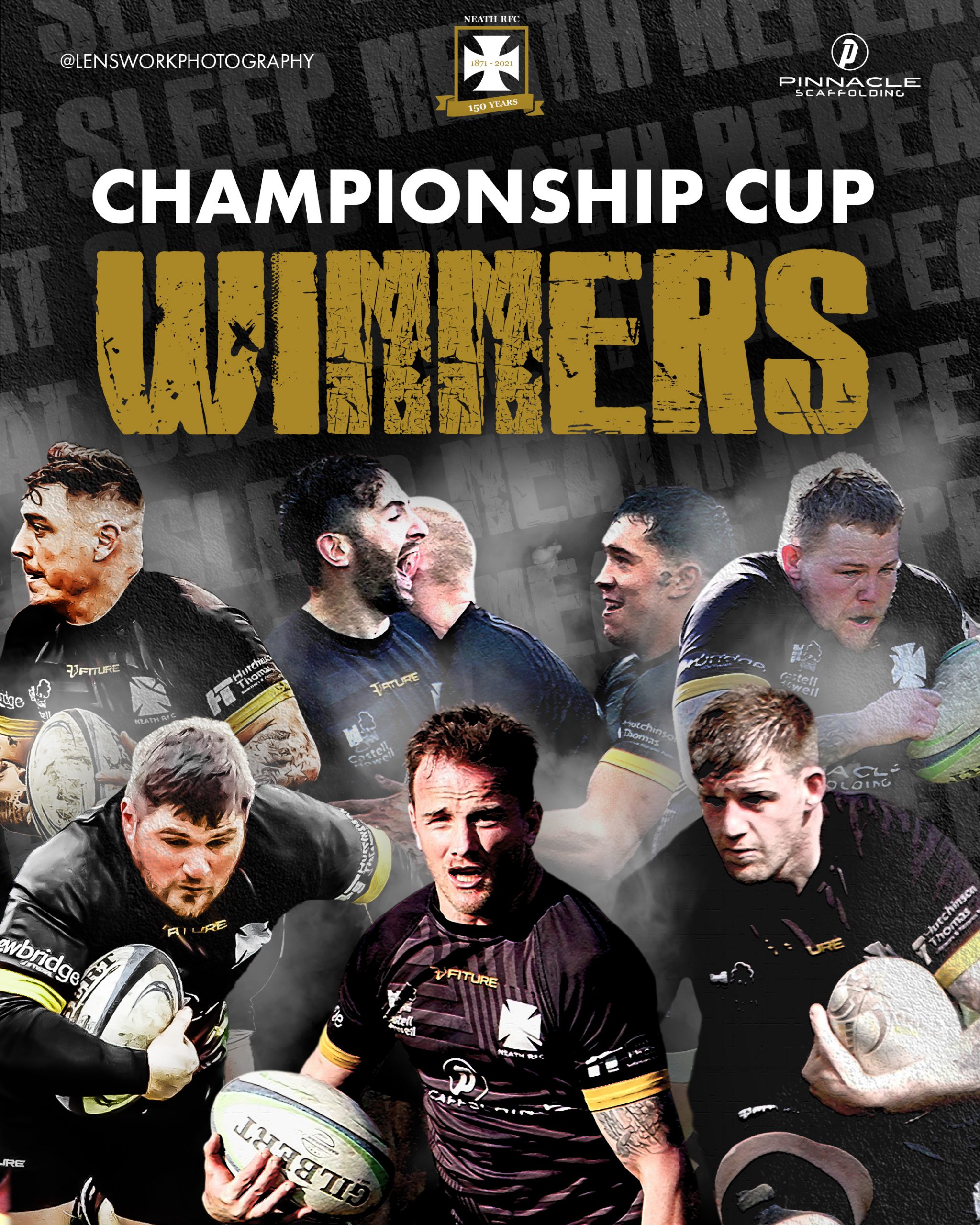