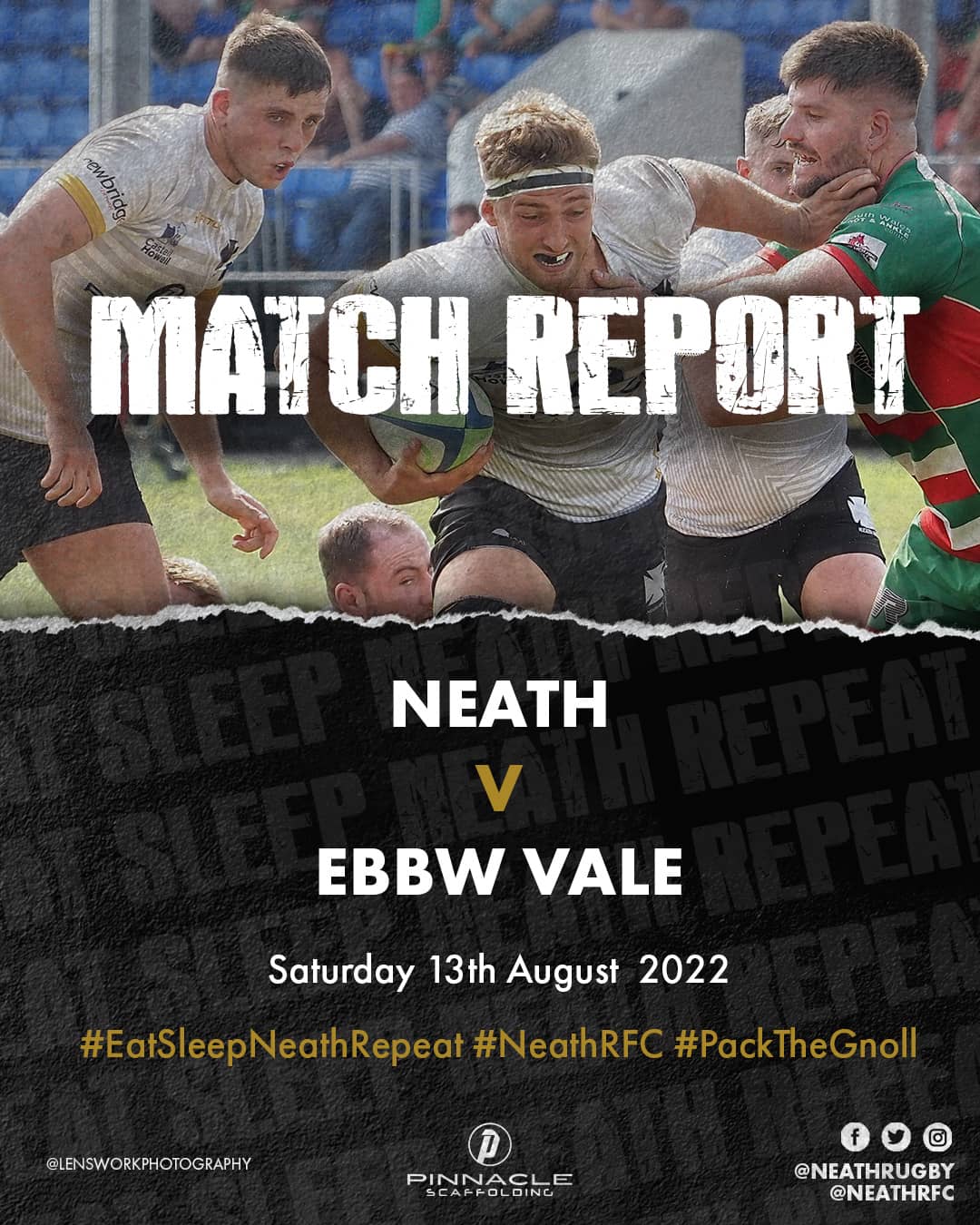 In a highly competitive fixture,  Neath fought bravely before yielding second best to Ebbw Vale at the blistering Costa del Gnoll where this pre-season affair was more full power microwave than warm-up fixture.

90 degrees on the fahrenheit scale is a rarity even in these globally-warmed times and praise is due to all the players and officials in the alien conditions. Acclaim too for the spectators – and there were plenty of them in a healthy attendance; no “mad dogs” were evident but maybe there were a few “Englishmen” present !

It would have brought back memories for any of the 1976 Jamaican tour party present – and one of their number, the great Glyn Shaw, former committee-man Gerald Evans and others were remembered in a perfectly-observed minute’s silence before kick-off.

Neath had taken every precaution with pitch-side umbrellas for the replacements and even a prized open-air ice (which raidly turned to tepid water) bath but rarely – if ever – can the famous old ground have witnessed a game played in such searing heat.

It must all have been somewhat different from the first game between the clubs which was on Boxing Day, 1921 when Neath, adapting better to the presumably cooler conditions, won 12-nil.

Still, 100 years of rugby rivalry cannot be cast aside – WRU Fault-Finders, please note – and these two old contenders went at each other with a relish in front of an appreciative crowd where shirt-sleeves and summer dresses were de rigueur – although not usually on the same person.

In the summer time, the rhythm was anything but easy for it was high-intensity stuff as the two sides grappled for the ascendancy on a bone-hard pitch and the defences were every bit as solid as the conditions underfoot.

Things soon “warmed up” and tempers boiled over in a couple of bouts of fisticuffs; a full half hour had ticked by before Ebbw Vale bagged the first score, scrum-half Jonathan Evans crossing after a neatly-placed kick and outside-half Haydn Simons converted.

But Neath were giving it a good go up front with some hard-driving play by the forwards and, when both assistants properly intervened to return play close to the Vale line after an interception, Neath reduced the lead as outside-half Steff Williams kicked a penalty.

And before the interval, the home side went in front when top of the lineout ball led to the excellent Lewis Evans sending a sublime pass to replacement Aran Parsons who scored in the right corner and Steff Williams made no mistake with the touchline conversion.

Mass substitutions were made at half-time and, trailing 7-10 at the break, Vale were quickly back in front when winger Rhys Davies made the most of a poor Neath chase and evaded the defence for a try.

Neath were making a fight of it though and, spurning a straightforward penalty in favour of a five-metre lineout, the Blacks (wearing heat-friendly white) were penalised on a technicality.

Williams then hit the woodwork with a penalty from much further out. It would have given Neath the lead but, in the aftermath, the over-enthusiastic flanker Morgan Kneath was correctly yellow-carded for a “no arms” challenge – ‘armless enough in its way !

Reduced to 14-men, the home side were now under pressure and indiscipline cost them dear as Vale, on the back of a series of penalties, pounced for a lineout-drive try from hooker Joe Franchi which Evan Lloyd converted.

But Neath were far from done and scrum-half Macauley Griffiths broke splendidly along the standside touchline and found his back row up in support but Jacob Blackmore’s pass eluded Kneath who would have had a clear 25 metre-run to the line thus depriving the home support of a first “KNEATH, KNEATH, KNEATH” chant.

A second try would have been nothing less than Neath deserved as they had played their full part in a game which Vale deserved to shade – not that there was much of that !

It would be unfair to single out any individuals from a useful first exercise for both teams who will be all the better for it. Vale now head to Clifton and Cross Keys; Neath to Crymych next Saturday then Swansea at home on Friday, August 25 when it should be a good deal cooler !