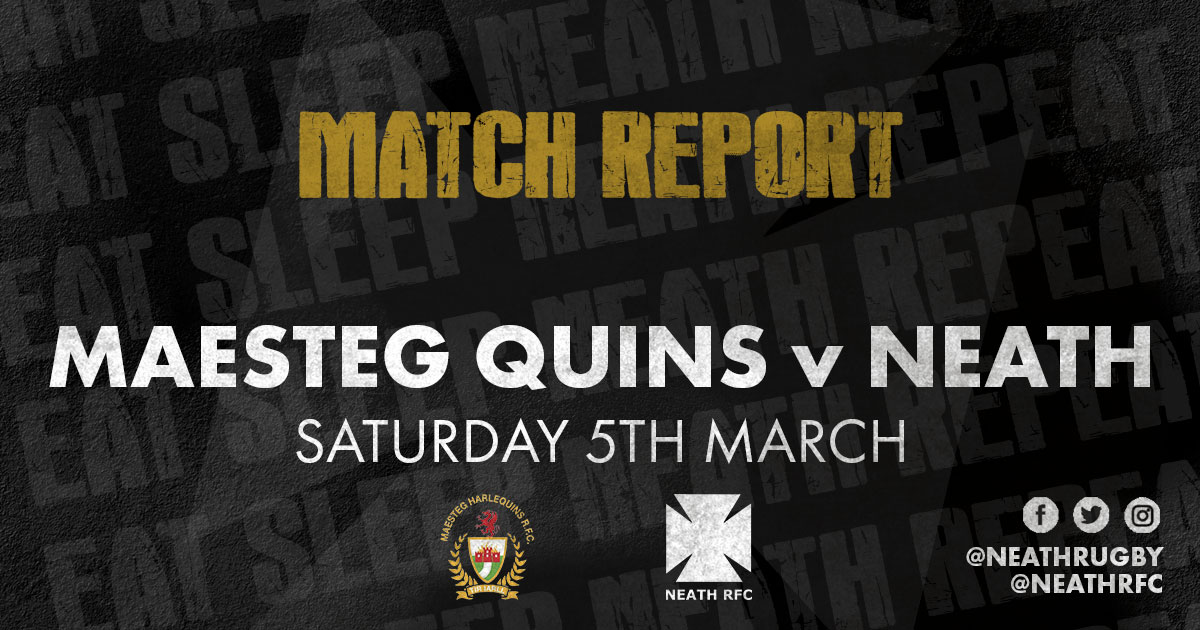 A hat-trick of tries by tight forward Scott Hicks booked Neath a WRU Championship Cup final place against Bargoed next month, date to be confirmed, with this hard-earned win over Maesteg Quins at South Parade.

Quins winger Geraint Evans, making his 250th appearance, led the home side onto the field but, playing into a strong, cold wind, it was the visitors who started with a bang as winger James Roberts re-claimed the kick off and, after a lineout drive, flanker Alun Jones was adjudged to have been held up over the line.

However, the Blacks were playing with purpose and good shape and, after just four minutes, they conjured up a try. Scott Hicks, pressed into second row duty due to injuries but, still a formidable presence in the loose, he clattered over near the posts and outside-half Steff Williams converted to make it 7-nil to Neath.

But Neath lost possession almost immediately and defended well for a while before a missed tackle saw home centre Brandon Huntley slice through for Quins’ first try which outside-half Tadhg McGuckin converted to level the scores on eleven minutes.

Neath lost centre Ben Atkins with a shoulder injury and Maesteg Quins made full use of the wind to establish an attacking position from which hooker Rhydian Jenkins eventually crossed and McGuckin’s conversion made it 14-7 to the homesters.

A couple of chances went abegging – full back Iestyn Morgan was halted close to the line in the right corner and then Neath should have profited from lock Jacob Blackmore’s fine lineout work but were penalised at a short-range maul so it stayed 14-7 at halftime.

With wind advantage, Neath started the second-half well with Steff Williams breaking through but he could not find James Roberts outside him. The Blacks kept up the pressure and, with the referee playing advantage, they really should have worked the left wing over again.

The forwards took play up on the line and scrum half Macauley Griffiths sniped but he was stopped before the pressure told and Hicks bulldozed over for his second try which Steff Williams converted to tie the scores.

Neath were now on top but a dropped pass short of the line stunted their progress and Quins relieved the pressure when Neath were very harshly penalised at a rapidly advancing scrum.

The hard-working Neath forwards were not to be denied though and a grand charge by prop Tim Ryan led to that man Hicks barging over again to complete his hat-trick to put Neath back in front at 19-14.

Front five hat-tricks are rare although adherents of a decent vintage will recall the sublime Huw Richards once performing the feat in a win at Swansea and David Joseph revelling in plundering four against a Carmarthen Select – both in 1986/87.

With ten minutes remaining, great work at the tackle by replacement hooker Sion Crocker – on for the lively Chris Morris – won Neath a penalty and Steff Williams duly obliged to more or less make it safe with a pair of late penalties.

Scott Hicks blotted his copybook when he was rightly penalised for hacking the ball through a ruck and received a yellow card for his trouble too and a flurry of needless penalties to the home side saw Quins hit back again well into injury time with a try by prop Dean Ronan but McGuckin’s conversion attempt sailed wide.

Quins, as usual, had given Neath plenty to think about but the Blacks maintained their 100 per cent record in the group and sealed their place in the final 25-19 and at the final whistle Neath supporters, in celebratory mood, applauded both sides off the field.

Coach Patrick Horgan said, “We squandered too many chances to be completely satisfied with the overall performance but our character shone again as we overcame a string of injuries in the build-up to win through. A Cup Final is a just reward for all the effort the squad has put in all season.”

“But we cannot take our foot off the gas as next week we revert to Championship action with a visit to Ystalyfera whose challenge will be very similar and every bit as determined as Maesteg Quins.”