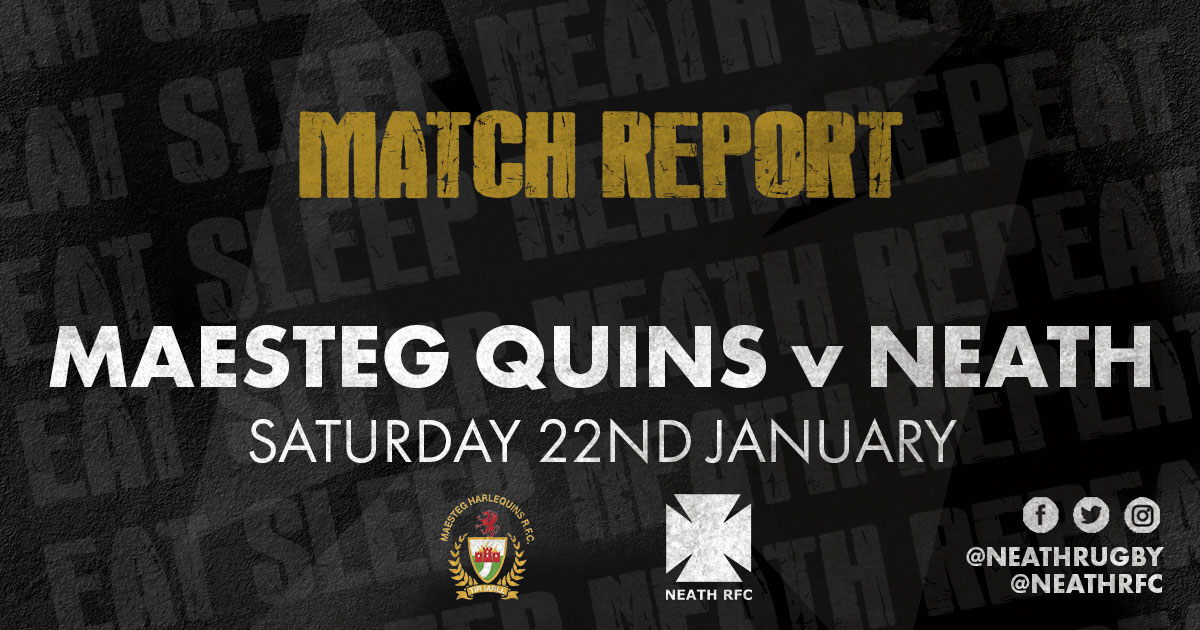 Purposeful Neath turned on the forward power to subdue Maesteg Quins and restore some of the pride which took a battering from the same opponents earlier in the season.

Rugby’s return after a 5-week break was greeted by a chill, still afternoon and a nice, firm pitch at South Parade where the rugby entertainment for a healthy-sized crowd matched the splendid panoramic views.

Neath started poorly and a series of mistakes in the opening quarter stunted their undoubted ambition but their quality gradually shone through as the game unfolded.

Their initial laxity allowed home outside-half Tadgh McGuckin the opportunity to place an early penalty but, with the referee playing a good advantage, a first dropped goal of the season by outside-half Steff Williams levelled things at 3-3.

Two McGuckin penalties on the back of those errors steered Quins ahead at 9-3 but Neath were looking to play most of the rugby and the visitors took the lead which their enterprising play deserved. Lock Jacob Blackmore’s lineout take led to the All Black forwards marching Quins back over their line for hooker Sion Crocker to get the opening try.

The try not only gave Neath the lead but it also carried the Blacks past 500 points for the season and Williams’ conversion made it 10-9 but Neath did not deal with the re-start and McGuckin’s fourth penalty made it 10-12.

By now though the Neath forwards had warmed to their task with Crocker invariably finding his lineout targets – from tail to front. On the half-hour, Blackmore again leapt high to claim lineout ball and he was on the end of another powerful surge by the pack to touch down for Neath’s second try which put them in front at 15-12.

Excellent referee Mr. Rhys Jones would brook no nonsense – keen to accentuate the positive and punish the negative, he used his yellow card three times with two Quins

and one Neath despatched to the sidelines.

As Neath exerted their authority, a third home card became necessary when a deliberate knock on thwarted a promising Neath attack.

Neath kept up the pressure and might have scored again before half-time as winger  James Roberts nearly squeezed in at the corner and prop Tim Ryan’s drive for the line was held up so it stayed at 15-12 until the interval.

It did not take Neath long to impose themselves after the break. The Blacks varied their lineout attacks intelligently and off Jon Barley’s take, the forwards again took the ball on and, when the Quins forwards infringed yet again, Neath were correctly awarded a penalty try. Quins’  had the double indignity of another yellow-card for this indiscretion.

Neath were now 22-12 to the good and, after McGuckin missed a 30-metre penalty, the force was very much with the Blacks who moved the ball speedily after Griggs took a quick penalty. Quick ball saw Steff Williams step through half a gap and he sent winger James Roberts skating past the last defender to score his sixth try of the season.

27-12 up, Neath were well in control and a couple of good runs by the ever-dangerous Roberts threatened. Eventually, an attacking platform was gained from which the forwards again produced the goods – the Crocker-Barley partnership was effective once more and flanker Alun Jones drove over for their fifth try which Williams goaled.

Neath, now leading 34-12, fully employed the replacements’ bench and kept up the pace and only a careless pass ruined a chance wide on the left but Quins countered with a consolation try by skipper Steve Williams who as usual led his side admirably and McGuckin converted.

That completed the scoring and a good win for Neath who, in the elation of victory, will do well to remind themselves of the slackness of that opening first quarter.

Ultimately, Neath’s try-count of 5-1 told its own story and it puts them in good heart for next Saturday when Neath supporters will be glad to see the Blacks run out on The Gnoll again for the first time in 7 weeks.

Unbeaten Championship leaders Bargoed are the visitors and will be a real challenge, kick off is at 2.30pm – it should be an enthralling battle and one not to be missed !