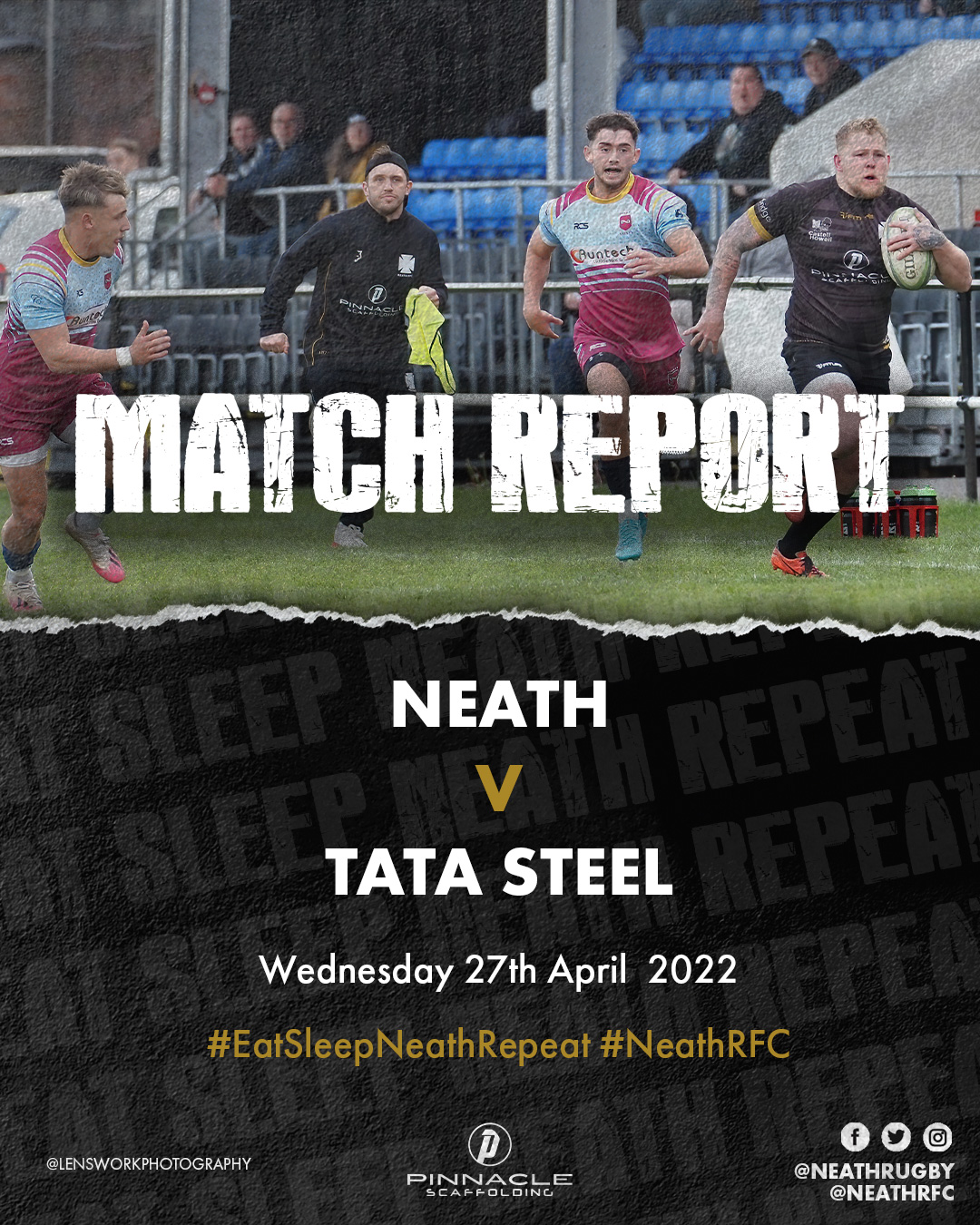 Neath dug deep to go top of the WRU Championship for the first time with a 5-try win over Tata Steel at The Gnoll on Wednesday.

The Welsh All Blacks fielded only five of their Cup-winning starters but, with seven straight wins behind them, were favourites against Tata Steel who have struggled this season.

However, Tata started purposefully and, after an early exchange of penalties between visiting full back Willis Wood and home outside-half Steff Williams, the Saints broke from deep and good work by No.8 Ryan Morgan helped set up a fine try by centre Kian Monaghan which Wood converted.

Neath were looking a little jaded after their Sunday – and Monday ! – exertions but, from a Jon Barley line-out take, a forward rumble resulted in a first try for prop Zak Giannini to make it 8-10. 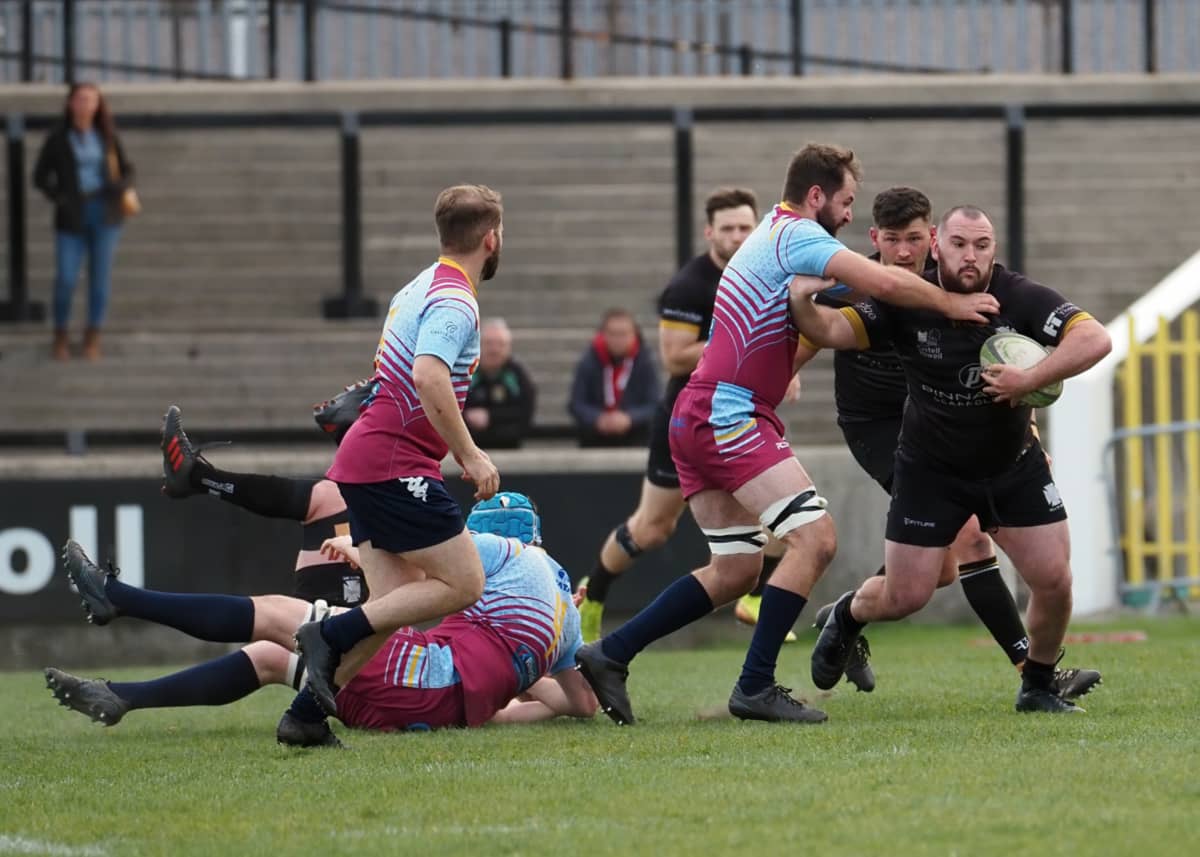 8-13 in arrears, the Blacks were beginning to play although they too often ignored or cramped Cup final try-hero James Roberts on the right flank. After a frantic interlude, centre Jon Bayliss powered his way over for a try which Steff Williams converted.

And two minutes later the same combination struck again, Williams’ well-timed pass sending Bayliss sailing in under the posts for his second try which Williams converted to make it 22-13 at the end of an entertaining half.

Neath exploded into the second-half when the ball was jolted out of a tackle and Josh Clark, on as Morgan’s back-row replacement, careered fully 50 metres downfield before linking with wing Matthew Jenkins who crossed for Neath’s fourth, bonus-point try which Williams goaled to make it 29-13. 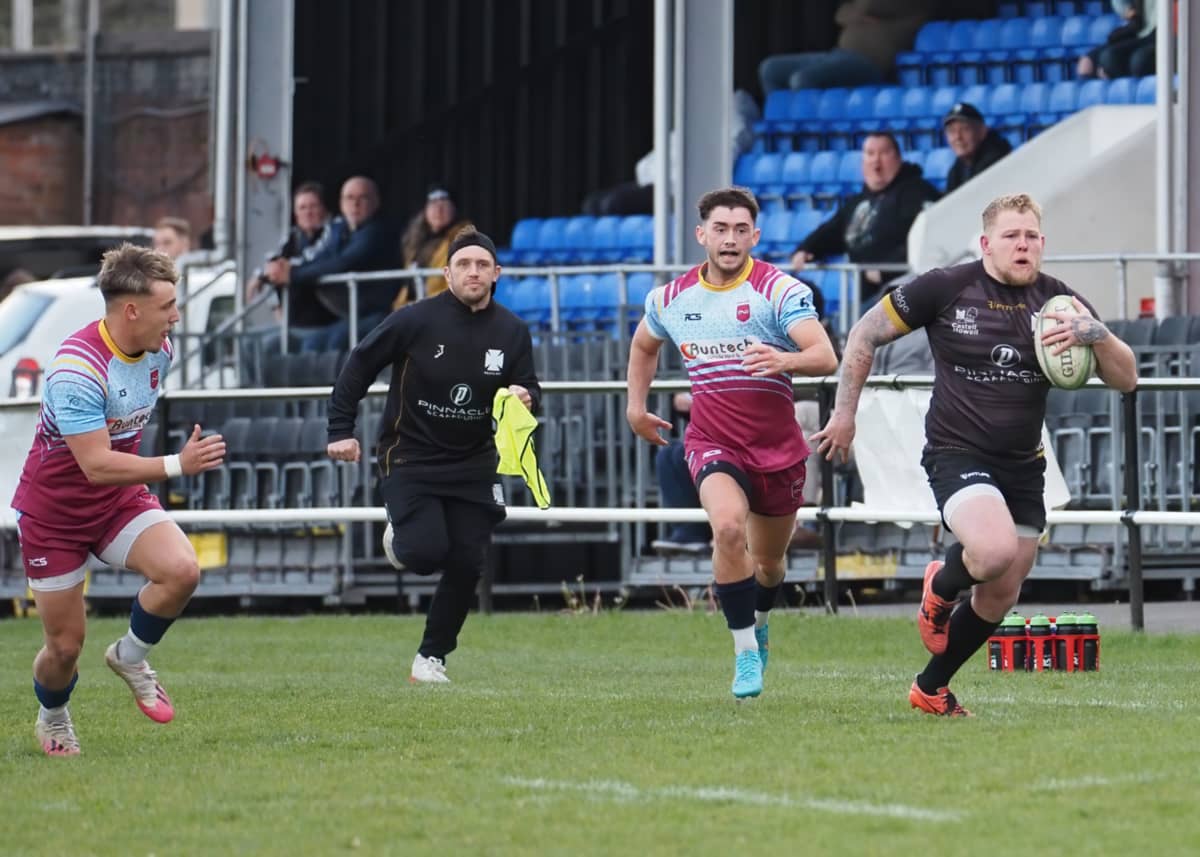 Tata rallied strongly with their back row of Morgan, Huw Thomas and Jordan Coxley and lock Chris Gorvett putting in some good work. They retained the ball prompting the referee to yellow card flanker Ciaran Comerford for not releasing in the tackle.

But midway through the half Neath extended their lead when sustained play capped by a consummate piece of skill by Clark freed flanker Emyr Williams who dived in at the corner for the team’s fifth try and Williams converted magnificently from the touchline.

Neath employed their full quota of replacements and ended with all three fine hookers on the field at the same time : fortunately, “old hand” Sion Crocker, man-of-the-match Chris Morris and the mercurial Josh Clark are among the best of rugby footballers too !

However, to their credit, Tata finished strongly and forced a flurry of penalties. Former Neath man Luke Griffiths got a late reward when he crossed for the visitors’ second try which Wood converted to make the score-line more reflective of play.

There was still time for young Ciaran Comerford to become the first Neath player to be double-yellowed for technical offences since Craig Mitchell in a victory at Pontypool over a decade ago – a no-arms ankle-level tackle was apparently the offence.

The punishment seemed excessive and did not match the crime especially as, just a minute later, the final whistle blew.

On this display, Tata’s league position does not do them justice as they are far from the worst side Neath have played this season and it was a tired Neath side which trooped off the field satisfied that they had done enough to take over leadership of the Division.

A week’s rest should see them fully recovered but, for the Blacks to stay there will need a peculiar series of events involving rival clubs Bargoed and Pontypool.

Whatsoever, there will still be everything to play for in Neath’s final league game of the season next week on Friday, May 6 when Cross Keys visit The Gnoll (kick off 7.30pm).

Neath will definitely be playing for top place that night – who knows what else ?