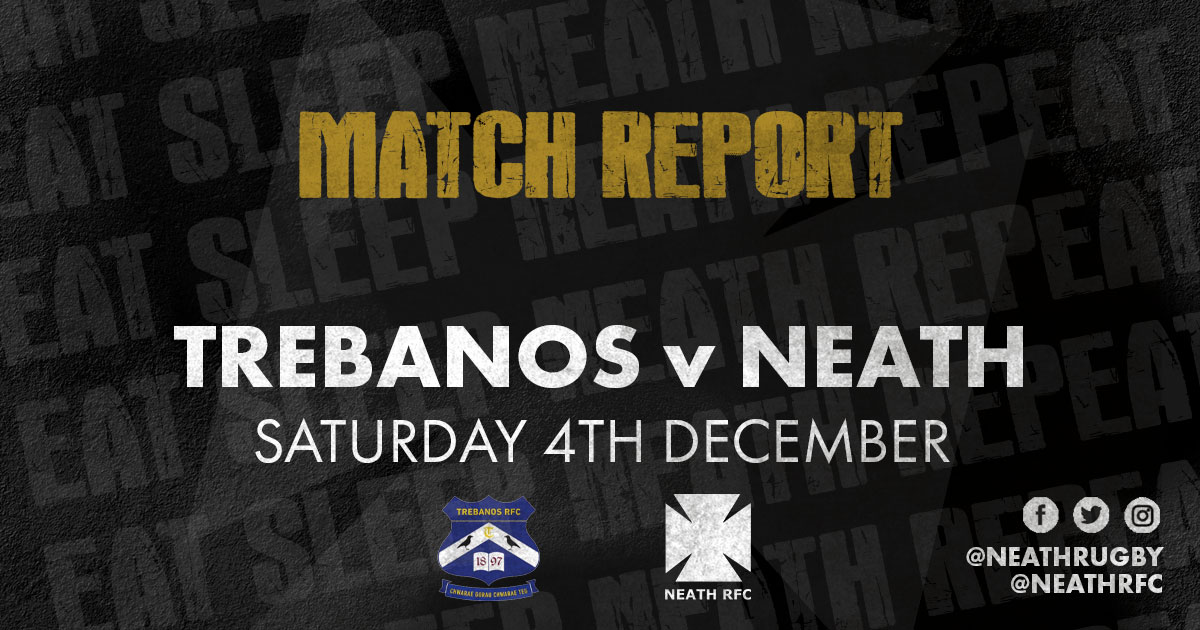 Trebanos, full of intent, reminded Neath – not that they needed a nudge – that every game in the Championship is a contest and it took the Blacks almost an hour to quell the purposeful home side and pull this game out of the fire for their tenth consecutive victory.

Neath’s starting line-up showed eight changes – enforced and rotational – from the team which famously beat Pontypool a week earlier but the Blacks’ first half turned out to be a real case of “after the Lord Mayor’s Show” as they struggled to impose themselves on the home side on a heavy ground.

Trebanos were out “to do a Neath” and inflict a giant-killing of their own and, for a long time, they gave as good as they got.

Neath’s scrum had the edge from the start with the front row of Gareth Lloyd, Chris Morris and Tim Ryan providing a solid base but sometimes their ambition behind the scrum got the better of them.

They were faced by a determined home side for whom prop Aled Humphreys and lock Iwan Davies were hungry for work, captain Sean Hopkins and co-flanker Rhydian George were conspicuous and No.8 Dylan Hills tidied up at the base of their under-pressure scrum.

They certainly made life difficult for Neath who were not hitting the right notes and goal-kicking wing Matthew Edwards nosed the home side in front with a penalty after seven minutes and missed another soon afterwards.

But the Blacks gradually built some momentum and a lineout move perfected at Thursday’s training-session yielded a third try of the season for hooker Chris Morris.

What had been a cagey, evenly-fought half sparked into life before the break when Edwards landed his second goal and then converted a kick and chase try by home outside-half Lewis Humphreys and Trebanos deservedly went in at half-time 13-5 to the good.

On the resumption things worsened for the Blacks when Lewis Humphreys ran through a gaping hole in Neath’s line and Edwards dabbed down to make it 5-18. No such chink in Neath’s armour had appeared against Pontypool and the score stung Neath into action.

It was now or never for Neath and they were not found lacking. Trebanos had defended on the edge and, when Iwan Davies was sin-binned, Neath pounced.

A surging run by lock Ross O’Connor got them going, the forwards took it on, the ball was switched and a lovely inside pass from flanker Jacob Blackmore sent winger Aaron Grabham speeding through to out-pace the home defence for Neath’s second try which outside-half Steff Williams goaled.

With replacement Scott Hicks on at No.8 after a long lay-off, the impressive Owain Morgan moved to flanker and Blackmore moved up to replace injured Sam Langford in the second-row.

And it was off the Cimla man’s lineout take that Grabham entered the line at speed and co-winger Jonny Bayliss was freed to score wide out on the left. Williams converted quite splendidly – and suddenly Neath were back in front at 19-18.

Trebanos briefly regained their lead when Edwards landed his third goal from longish range but they were beginning to run out of steam and Neath forced them back to the brink of their own try-line.

Neath were squeezing the pressure-trigger and, when replacement scrum-half Nicky Griffiths charged down a Trebanos kick, young flanker Dyfan Ceredig reacted fastest to dab down for Neath’s bonus point-clinching fourth try to make it 24-19 to Neath.

Neath’s scrum superiority really told in the last quarter, Blackmore’s lineout work in conjunction with his cohorts was productive and Grabham, again making the extra man, was through once more to throw a flattish pass to Bayliss who bagged his second try which robbed Trebanos of the losing bonus point which they had richly earned – it was Neath’s 60th try in 14 games this term.

It had been a competitive game with much honest toil up front and good attacking willingness behind from both sides and it was in the last quarter when Trebanos tired that Neath put their stamp on the game and victory was assured with Scott Hicks and Nicky Griffiths big influences off the bench.

The win lifts Neath to second in the table behind early pace-setters Bargoed with Pontypool looming in third place. Heady days indeed and next Saturday Neath return to home action when the always competitive Ystrad Rhondda, fresh from their success over Maesteg Quins, come to The Gnoll (2.30pm)

Earlier in the season, Neath had to pull out all the stops to win 31-25 in a spirited game at Ystrad in the Cup so it should be another keen contest as the Blacks are far from the finished article.

Consequently, every game is exacting and compelling for Neath’s growing band of supporters – the Blacks are well worth a watch; so too are Trebanos who next head to Tata Steel !