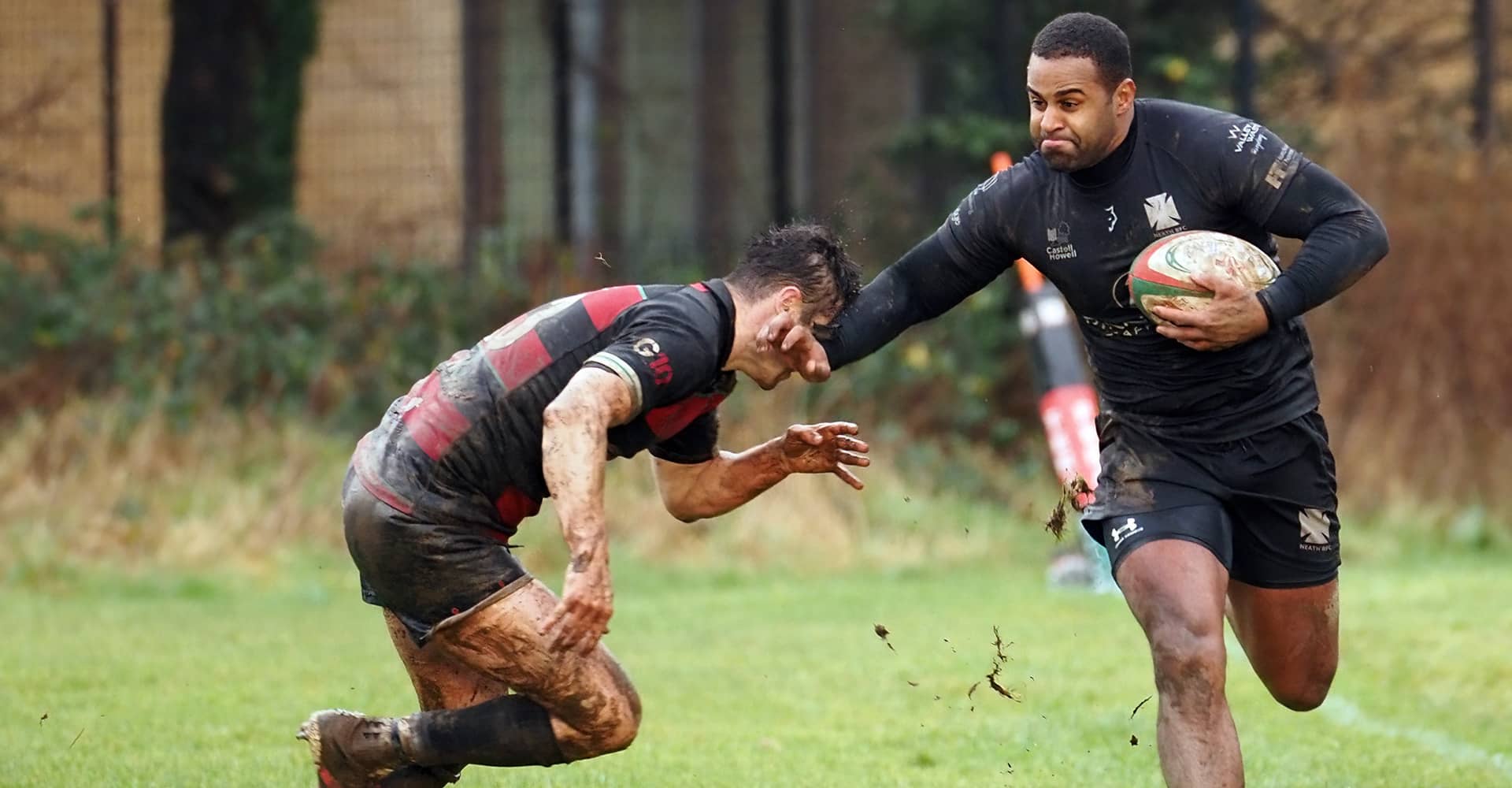 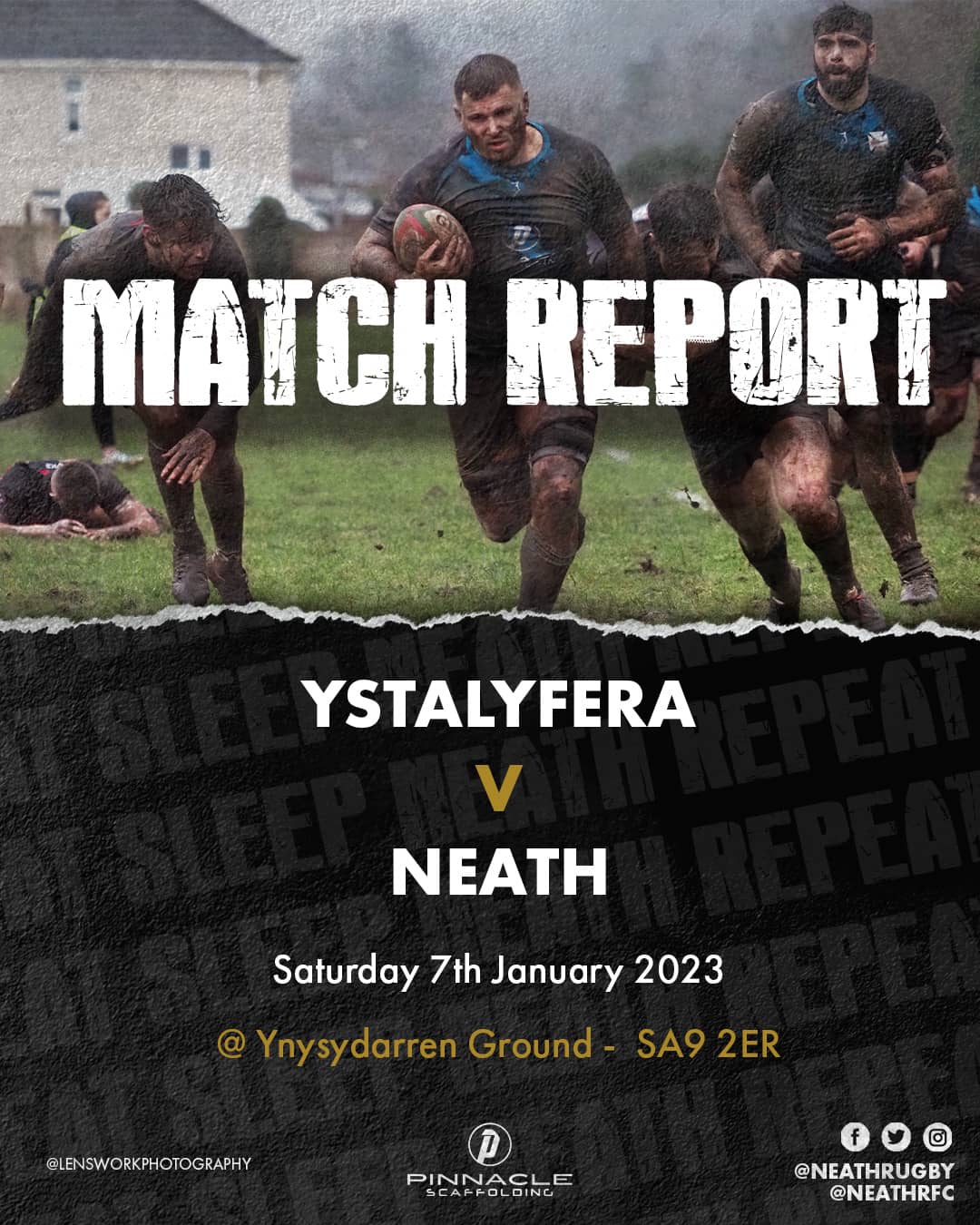 “Mud, mud, glorious mud. Nothing quite like it for cooling the blood.” Or so the old Flanders and Swann refrain would have it.

Cold, soaked through but happy – and that went for the supporters too ! – Neath reinforced their position at the top of the WRU Championship with a strong 6-try performance.

Conditions were treacherous at Ystalyfera whose workers had performed wonders to get the pitch playable after a morning break in the rain.

Underfoot it was very heavy and more rain – of the cats, dogs and many other domestic pets variety – greeted the kick off when Neath had first use of the slope but Ystalyfera had the advantage of an erratic wind.

For most of their proud history, Neath have been well suited to a forward wrestle in the mud and the current crop are no exception.

After a couple of early errors, the Blacks were first to go close when centre Ben Atkins was adjudged to have been held up over the try-line.

But the Neath forwards were controlling possession, switching play from side to side and on 10 minutes Atkins made the most of a second chance to hit the try-line and outside-half Steff Williams converted superbly from a wide angle into that volatile wind which was now blowing at its strongest.

The rain was coming down in torrents but the Neath forwards were firmly in command and five minutes later the Blacks doubled their lead when the strength of their combined drive saw them spurn a penalty under the posts, retain possession through several phases and No.8 David Griggs touched down for Steff Williams to add the this time simpler conversion points. 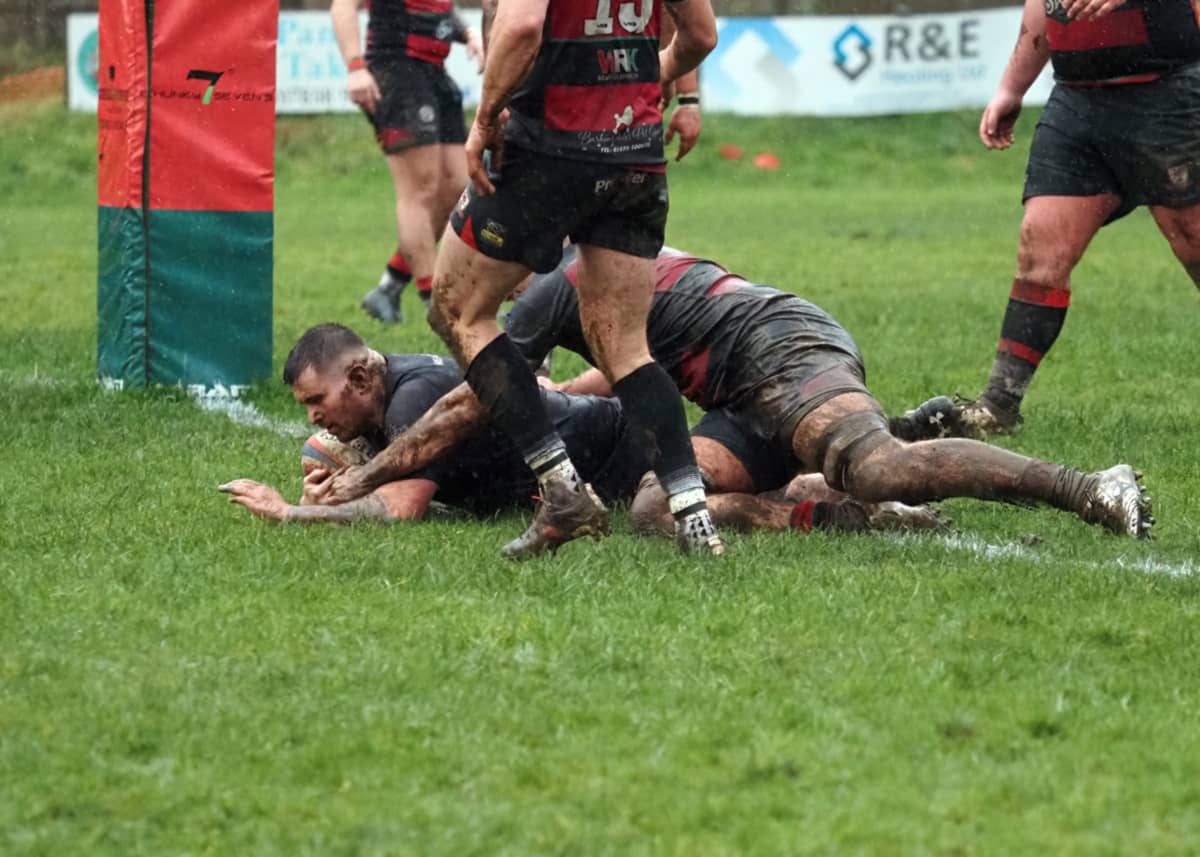 Neath were very much on top and midway through the half their Masterly Eight drove powerfully again to set up a third try by hooker Sion Crocker – his 11th try of the season – and Steff Williams duly added the conversion points to increase Neath’s lead to a handsome 21-nil.

That score effectively settled the result but to their credit Ystalyfera hit back and expert handling of a greasy ball resulted in a try by full back Alec Jones which outside-half Sam Comley converted.

Determined Neath were in no mood to let the home team back into contention though and right on half-time the Blacks responded with some wonderful linking by scrum half Macauley Griffiths and his forwards – handling which would have graced a dry day.

The Blacks fought their way to the right corner and, from a lineout, flanker Elis Hopkins crossed for the fourth, bonus point try which Williams again converted splendidly to make it 28-7 at the interval. 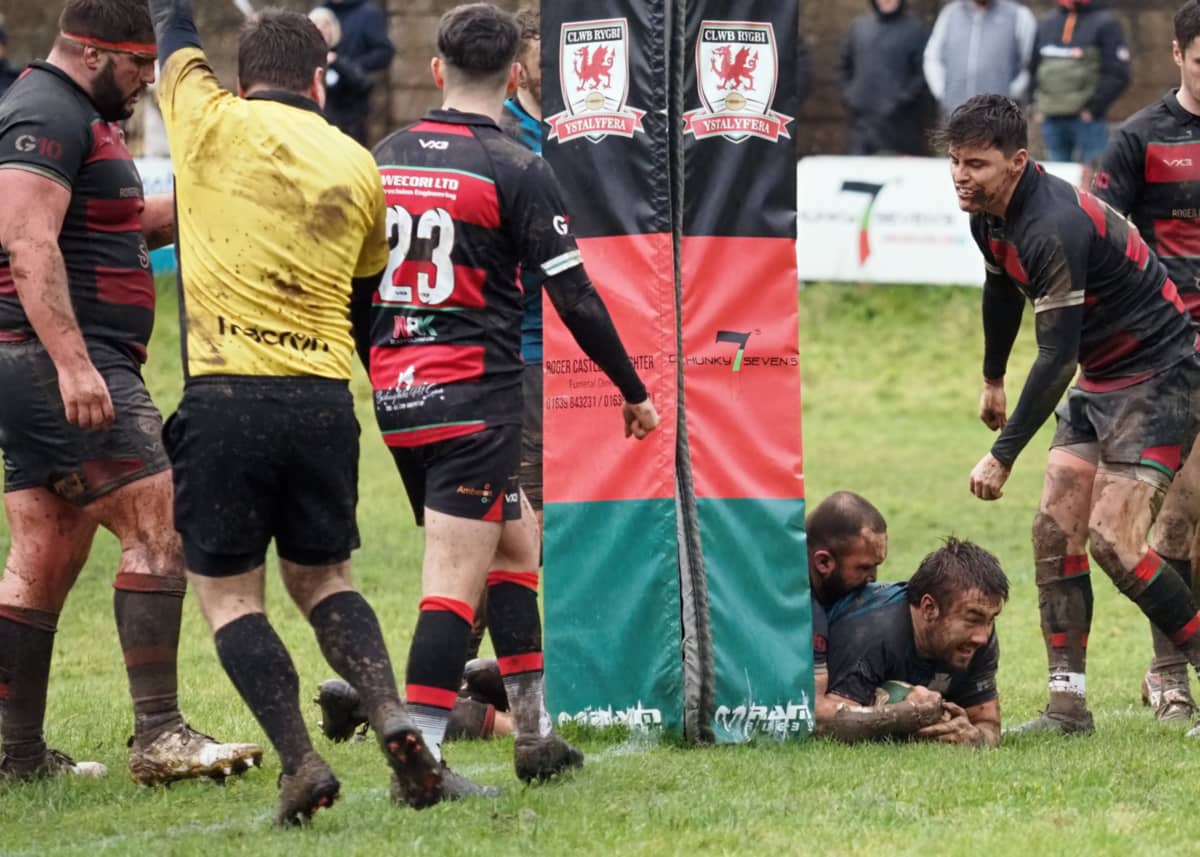 Neath emerged for the second-half wearing their change teal jerseys but the nature of play did not alter one bit as the Blacks clicked into rhythm and soon added their fifth try.

Playing uphill onto slightly terra firma, Neath were quick to attack and constant probing of the Ystalyfera defence saw Elis Hopkins, back to his most forceful since his long injury lay-off, drive over for his second score near the posts for Steff Williams to convert and extend the lead to 35-7.

Neath kept up the pressure with prop Gareth Lloyd working diligently and locks Matthew Davies and Jacob Blackmore giving Neath lineout advantage and offering themselves as willing ball-carriers in a relentless effort by the Masterly Eight.

In such trying conditions, the scrum-half becomes almost a ninth forward and Macauley Griffiths fitted that bill and usually managed to get the ball away cleanly to his partner although the back-line was naturally confined to a largely supporting role which they did well.

Neath added one more try – their sixth – when the imposing David Griggs, relishing the conditions like a good mudlark should, made a strong 30 metre charge, busting tackle after tackle, and finished with a flourish for his second score. 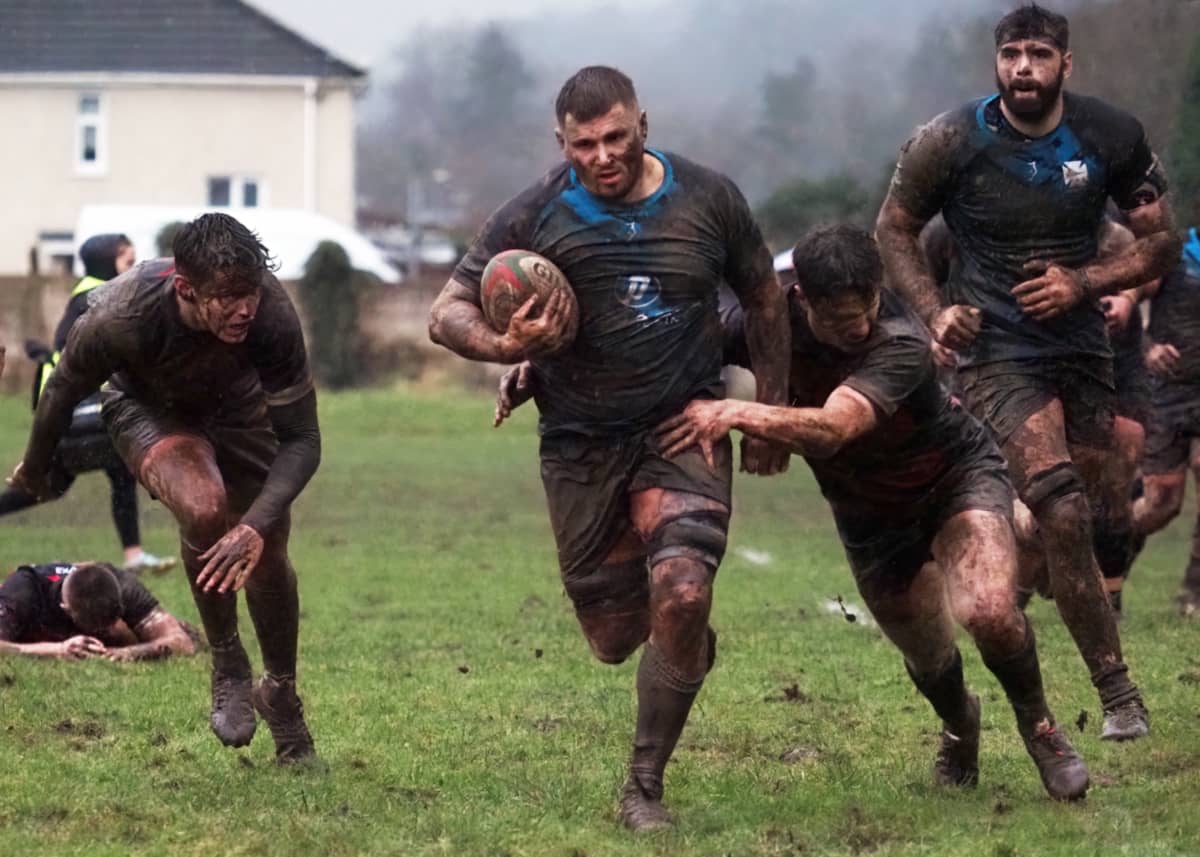 Up stepped the immaculate Steff Williams to land his 50th conversion of the season (144 points in all) as he made it a perfect six from six and it was 42-7.

That completed the scoring as rain, hailstones and goodness knows what other meteorological phenomena bore down from the heavens – and the mud, mud became even more glorious.

The deluge worsened and, in the gathering gloom, Ystalyfera rallied slightly. They had played a keen game throughout and battled valiantly with Kiaran Mackey, Craig Price and skipper Ben Williams in the thick of it but they had the misfortune to run into a firing Neath side well able to counter their strengths.

After Jack Powell collected a yellow card, the home team were on Neath’s 22 when the referee blew a final blast on his whistle – in the Stygian darkness, it came as a relief to spectators and players on both sides who deserve nothing but praise for supplying surprisingly good entertainment in the mud which may have been too much for the Hippopotamus eulogised by Flanders and Swann.

Still, it was five more points in the bag for impressive Neath who now move onto an important game at Bargoed while Ystalyfera head to Cross Keys whose Pandy Park suffered the only cancellation in the Division on Saturday… more rain is forecast !