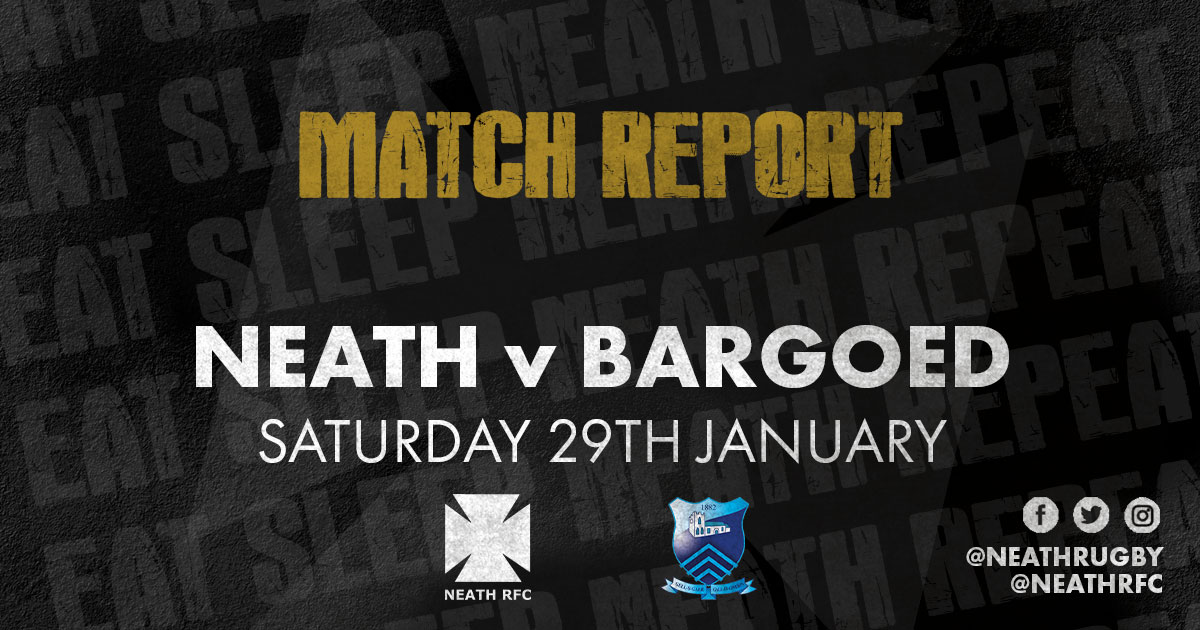 150 years ago to the day, Neath RFC played its first ever game against Swansea in the first recorded club fixture in Wales the result was marked down as “disputed”, there was an air of inevitability therefore that this fine contest should have hinged on a “disputed” try – or so many spectators behind the posts felt.

This was a splendid top of the table match and a real credit to the Championship with two tough, well-matched teams going at it hammer and tongs and the result was in the balance until the very end.

The opening ten minutes were a portent of things to come : clever angles and creative patterns running into tight defences, both sides showing perfect lineout efficiency, Bargoed’s scrum slightly the stronger but negated by Neath’s superior surging mauls from which the Blacks made good headway throughout.

After ten minutes Bargoed made the most of a couple of penalty awards to inch their way upfield and opened the scoring with a penalty by outside-half Josh Prosser. But a superb 50:22 kick by Steff Williams put Neath on the attack and, after a couple of forward drives, Neath had the confidence to spurn an easy three points and take a penalty to the corner.

It did not immediately pay dividends but Neath kept up the attack and Nicky Griffiths nearly put winger Aaron Grabham in before Bargoed broke out.

Midway through the half a splendid break by the experienced scrum-half on halfway saw him feed supporting centre Ryan Evans who outstripped the defenders and darted 35 metres for the opening try which Williams converted to give Neath the lead at 7-3.

Bargoed were clearly rattled by Neath’s directness and their discipline deserted them as scrum-half James Leadbetter was yellow-carded. Neath instantly hit them when the Griffiths-Grabham combo worked to send in the winger on the narrow side for Neath’s second try which Williams converted.

Neath were then called upon to defend and they just managed to strip Bargoed as they headed to the try-line. Their gain-line tackling held firm in midfield all day but Bargoed showed the patience born of winning to get the ball outside them for once and centre Jordan Howells touched down although Neath were unhappy with the award.

Back came Neath though and outside-half Williams landed a penalty on half-time to take Neath into the interval 17-8 to the good.

On the resumption, Neath were soon back on the attack and seven minutes into the second-half Steff Williams fired over his second penalty to pass his 150 points for the season.

Now 20-8 down, Bargoed countered with great determination and brought on on the accomplished ex-Dragon Steffan Jones whose first task was to convert a try by former Neath No.8 Adam Powell after well controlled play by their heavy pack.

At 20-15, the pressure was still on Bargoed and former Dragons hooker Ryan Buckley was sin-binned for indiscipline. But this Bargoed team have been together for a long time and they know where to play and, unlike in the first half, Neath were unable to build momentum as Steff Jones’ kicking pinned them back.

And, as the final whistle approached, Leadbetter nipped in for a try, although supporters behind the line swore he lost control of the ball – nevertheless, the effort was awarded and Jones added the conversion to give Bargoed the lead.

Neath still had time to score and they responded positively, attacking and going through the phases but Bargoed played the off-side line to its limits and the match ended when Bargoed knocked on in the act of tackling and, instead of allowing Neath the scrum, the referee blew for time.

But that was it – and perhaps, on balance, a draw would have been a fair result as it had been a fine effort by both sides who produced compelling entertainment.

So Bargoed continue their merry ways at the top of the table; Neath in third can reflect that they have now played the best two sides in the Division, beaten one and narrowly lost to the other – taken together they show how far this side has come.

Neath might have just failed to relieve Bargoed of their unbeaten record but signs are that, although there is much scope for improvement, the Blacks are getting back to being a fighting force.

Defeat was chastening – but the manner of it means that Neath will take confidence into battle when league fixtures resume between the internationals.

Neath now move on to two eve-of-international Friday evening fixtures – the first on February 4 against Swansea at St. Helen’s, the second on February 11 at home to Kenfig Hill (both will kick off at 7.15pm).