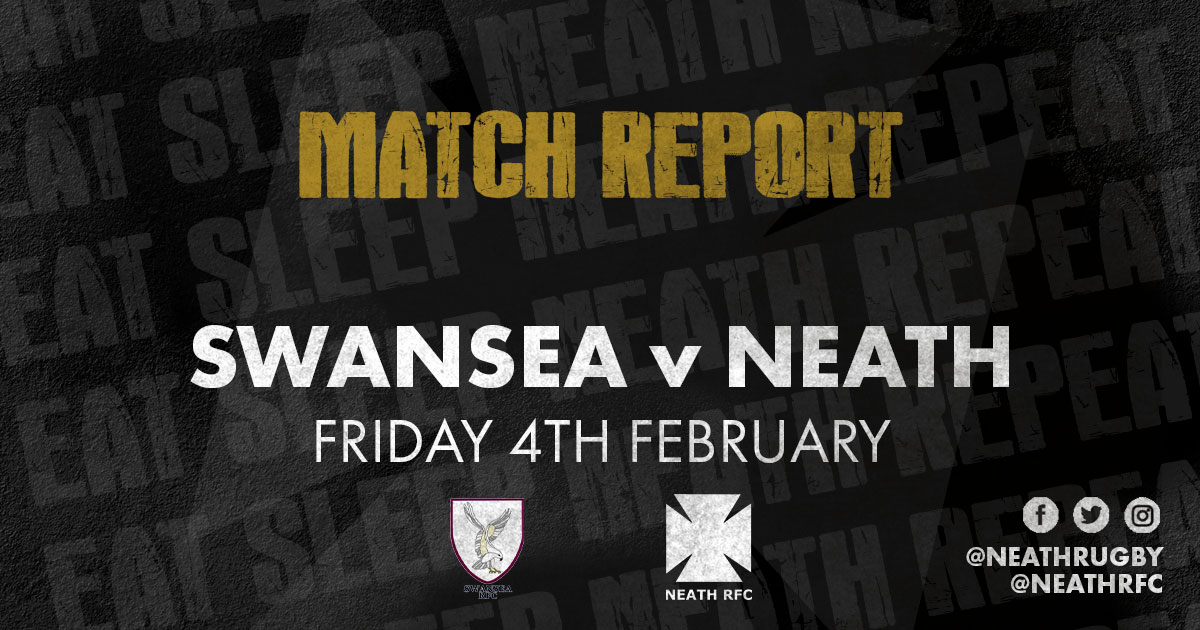 A much-altered Neath side, showing 10 changes from that which fought so splendidly with Championship leaders Bargoed, left it too late in this special 150th Anniversary fixture at St. Helen’s on Friday evening.

Swansea looked far stronger on paper as they paid Neath the compliment of fielding 11 of the team which started against Merthyr the previous week but the Blacks finished with a flourish and might have pinched it.

Playing into a stiff breeze, the Neath forwards forced Swansea into conceding a succession of penalties and, after charges by Sam Langford, Chris Morris and David Griggs, outside-half Steff Williams slotted a penalty to give the visitors a 3-nil lead.

But, as the first-half progressed, Swansea imposed themselves to far greater effect and used their scrum wisely as Neath incurred the displeasure of the referee. Swansea took the lead when hooker Garan Williams went in at the posts for James Davies to convert and, when prop Gareth Lloyd was sin-binned, they extended their lead as centre Keiran Charles took a short ball to score at the posts, outside-half Davies converting.

Neath threatened and had the chance of reducing the gap but decided to go for touch instead and Swansea came again. Crucially, on the verge of half-time, they bagged a third try when ex-Neath No.8 Charlie Davies dabbed down and James Davies converted to leave Neath out in the cold at 3-21.

Neath improved after the break when the sides were well matched and that was how it stayed until the 69th minute when suddenly Neath burst into life. Fortified by the arrival of a batch of lively young replacements, the Blacks ran the ball from their 22 and it resulted in a delightful try by prop Tim Ryan who handled twice on a 50-metre break and crossed for the remarkable kind of try which the front row union usually only dream of.

Steff Williams slotted the conversion and soon Neath were on the attack again. Running the ball from deep once more, winger James Roberts outpaced the defence, found support on the inside and only a blatant illegality prevented a try.

Neath re-cycled the ball and full back Iestyn Morgan coasted over for what looked like their second try but the referee had spotted a forward pass and took Neath back for a penalty which was kicked to touch and, after the customary lineout drive, Neath hit the narrow side and Williams went in.

His conversion from wide out was sublime, Neath were back in it and coming on strong. Williams made more second-half breaks than a snooker player, he repeated the trick to split the defence but slipped and the final whistle sounded – at least five minutes early in the judgement of supporters of both sides – leaving the Blacks to rue their first-half faults.

The three young forwards introduced – prop Ben Francis (Neath Athletic), lock Chris Thompson (Swansea University) and flanker Carwyn Sion (Tonmawr) – can be pleased with their debuts; in fact most of the youngsters did their causes no harm at all, Jordan Evans looks every inch a Neath player while Josh Clark and Sam Langford made safe returns after injury in one that got away.

More opportunities beckon next Friday evening when Neath, eager to keep playing in this interrupted season, have an additional fixture against Kenfig Hill at The Gnoll, kick off is at 7.15pm and admission will be £5.

* After the match, the two old rival clubs exchanged gifts commemorating the original fixture 150 years ago almost to the day. Here’s to the next 150 !