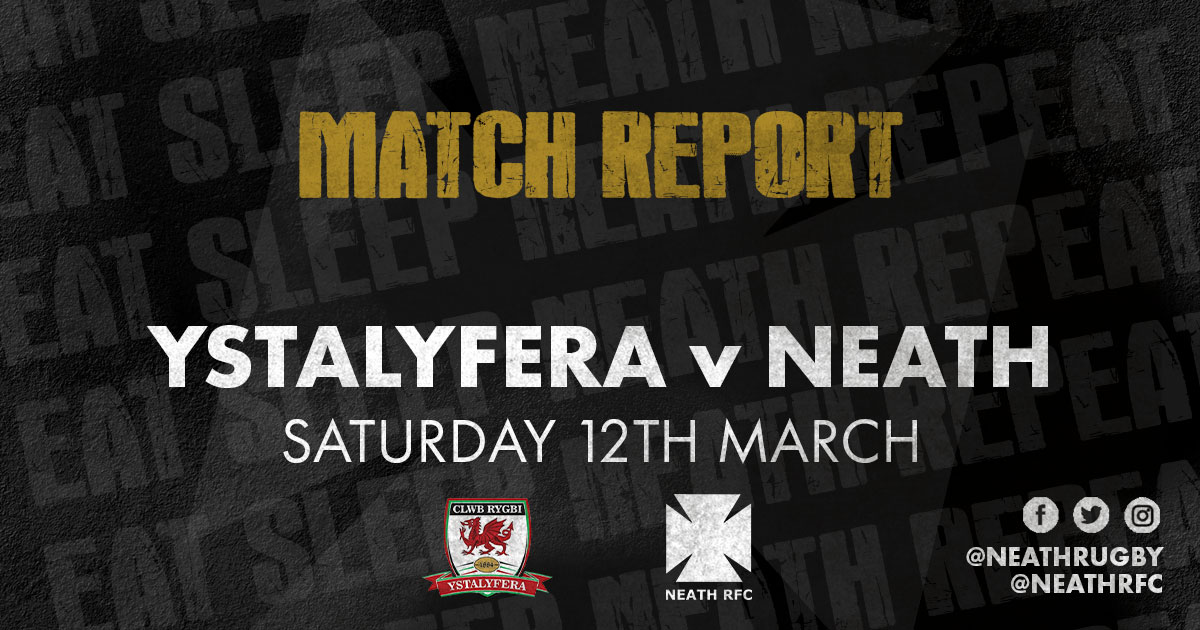 Back in league action for the first time in six weeks, Neath fought out a good old-fashioned forward slog in the mud at Ystalyfera – and the Blacks were given a tough time of it before eventually emerging on top, scoring 3 tries to one.

The pitch, well-manicured before earnest proceedings began, was still very heavy underfoot after Friday’s rains. Add in an awkward blustery wind and a young replacement referee who, in the circumstances, did well and it was very much a day for the rugby football connoisseur.

Ystalyfera, playing up the slope and on top in the early scrums, took the lead after 10 minutes through a penalty by full back Steff Castle. Neath retaliated with some neat play but, as is their irritating habit, squandered a couple of opportunities and conceded a rash of penalties, Castle missing with two ambitious penalty attempts.

Neath spurned kickable penalties in pursuit of tries as they put the squeeze on but their lineout malfunctioned. The All Blacks threatened only for a pass to hit the touchline rather than the winger and skipper Aaron Bramwell took a tapped penalty but was tackled just short of the line and penalised.

It was a tale of prowess then penalty for Neath but Ystalyfera were under pressure and it told when Neath pounced for two scores in quick succession before halftime.

A fine, winding run by dangerous winger Louis Rees got Neath on the front foot and the Neath forwards imposed themselves with a series of powerful mauls which pulled in the home defence allowing scrum-half Macauley Griffiths to snipe and score his third try of the campaign wide in the right corner to make it 5-3.

Two minutes later, the All Blacks were at it again as the forwards’ drive had the home defence back-pedalling and prop Tim Ryan was on hand to claim his seventh try of the campaign, outside-half Steff Williams’ well-judged conversion making it 12-3 at half-time.

Ystalyfera came out strongly after the interval and ten minutes in they hit back when Ospreys Academy wing Kian Abraham capitalised on a well-placed box kick to score wide out. Soon afterwards, Castle landed a second penalty and, at 12-11, the game hung in the balance.

But Neath raised themselves, lengthy kicks by Steff Williams and David Langdon gaining them attacking footholds which were spoilt by conceding further penalties before the neat footballing skills of flanker Alun Jones saw him bag his fourth try of the season in his 50th appearance for the Club.

There was an element of farce about the conversion. Steff Williams struck it nicely and it seemed that the kick was a good one; however, the touch-judges disagreed with each other. Normally that requires the referee’s judgement but instead a re-take was ordered : Williams duly delivered again, justice was done and Neath led 19-11.

Neath continued to attack and, going through the phases late on, actually put together their best piece of fluid, sustained play of the afternoon but the assault faltered when another pass was thrown into touch.

It had been that kind of day – there was plenty of solid, attritional work by the 22 forwards (including replacements) mentioned below who deserve praise as do the 4 scrum-halves engaged who had to deal with often slow, untidy possession.

With Bedwas losing surprisingly at Glamorgan Wanderers, Neath remain in third place – a point behind but with a game in hand although Pontypool are lurking in fifth.

It was Neath’s fourth 3-try away win of the campaign and, while winning ugly is infinitely preferable to losing prettily, as the dry pitches of Spring approach the All Blacks will be seeking more polished displays.