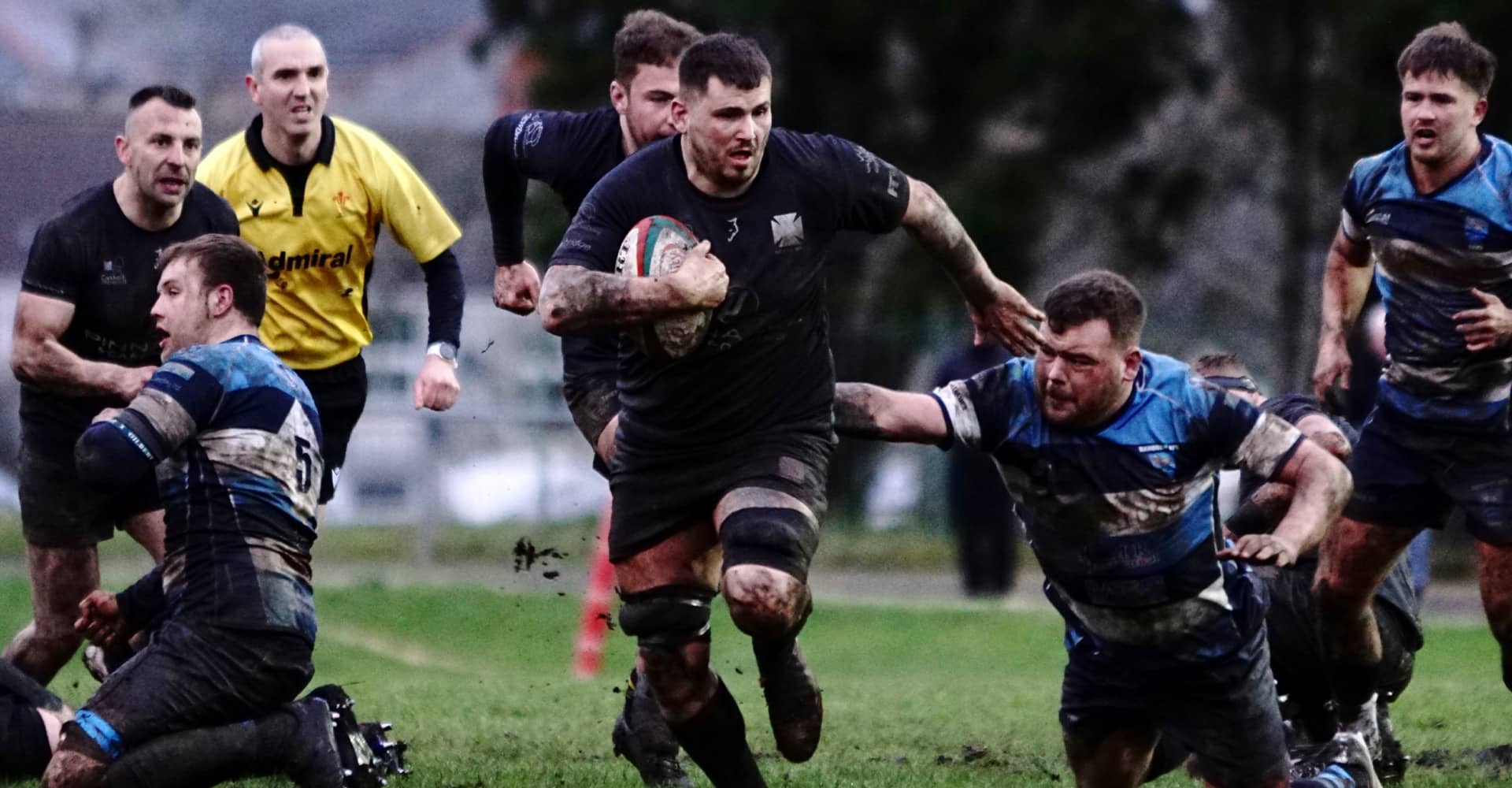 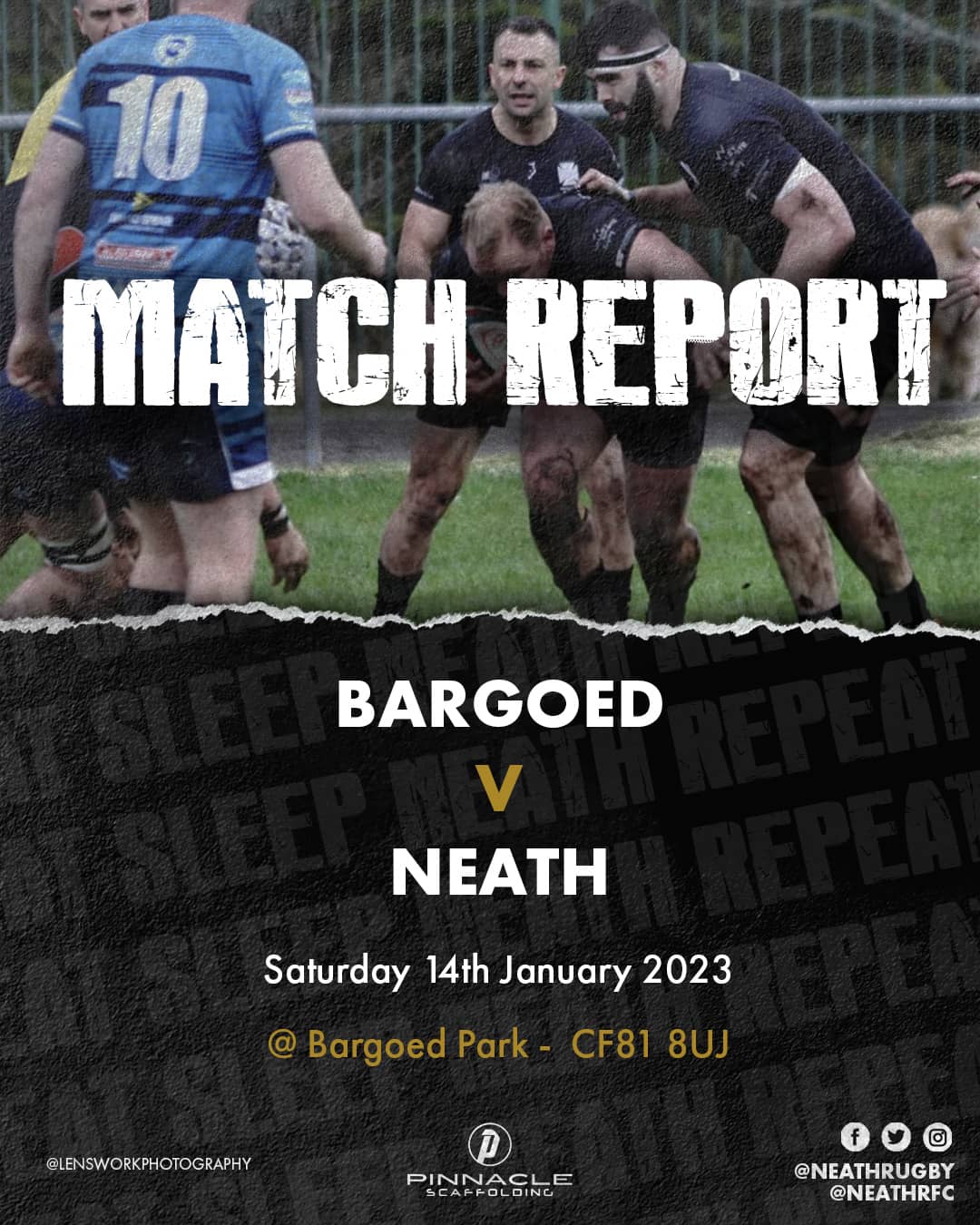 NEATH conceded pole position in the WRU Championship when their 9-game winning sequence came to an untimely end at third-placed Bargoed where the All Blacks were largely architects of their own downfall in a closely-fought game.

After all the recent downpours, Bargoed Park was very heavy but definitely playable and there was a chill wind gusting to make life difficult for the players as the home side sought to make up ground at the top of the table.

This was always going to be a tough encounter as there is not much between these two teams, Bargoed having won at Neath last season on their way to winning the WRU Championship before the Blacks beat them in the Cup final and then beat them again at The Gnoll in September – each time, there was very little in it. And so it proved again !

Bargoed were first to appear before Neath were led out by hooker Sion Crocker who was making his 200th appearance and received a splendid ovation from the many away supporters in a healthy crowd although it was wasted on home followers due to the failure of the P.A. System. 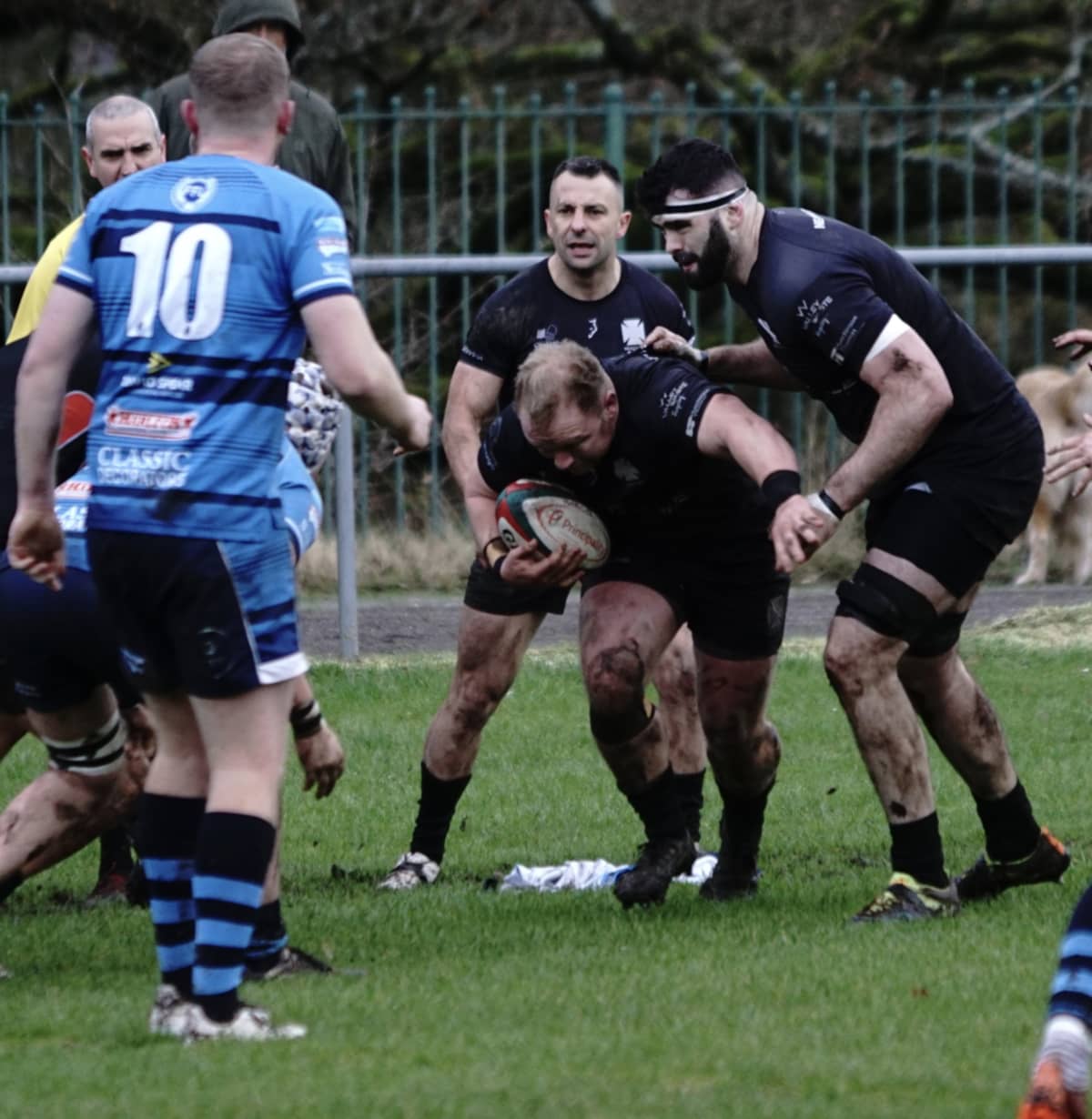 Fortunately, Bargoed’s announcer is blessed with the stentorian bellow of a parade-ground sergeant-major so spectators in the stand at least stood in a dignified minute’s silence before the home side kicked off with the wind in their favour and found a good touch.

It was nip and tuck for the first 20 minutes as the two packs vied for supremacy -the commanding work of lock Matthew Davies gave Neath a decided advantage at the linesout and the rattling runs of No.8 David Griggs were much in evidence although the home side shaded the scrums.

But Neath’s eight gradually built up a head of steam. Skipper Ryan Evans was held up over the line by two defenders, Bargoed kept infringing and Neath attempted a couple of novel short penalty moves before hitting the corner for a lineout.

Neath have two imposing lineout totems in Matthew Davies and the absent Jon Barley and it was from one of the former’s many takes that the first try came on the half-hour, the Blacks’ pack driving on powerfully for Sion Crocker to mark his milestone appearance with his 12th try of the season.

Bargoed varied their kicking game : a few went askew directly into touch and, whether long or short, Neath full back Lewis Evans and the last line dealt with everything that came their way but the Blacks suffered a blow when prop Tim Ryan eventually gave in to an ankle injury and was replaced by Jonny Thomas.

The Neath eight had to work hard to rebuff Bargoed’s forte of the driving lineout which brings them many a score. A patient build-up by the homesters eventually created space on the right for centre Ashley Norton to receive a neat backward flip-pass and score wide out.

Captain Steff Jones converted superbly from near the touchline and Bargoed took a 7-5 advantage in to the interval – a scoreline which reflected the evenly-fought contest.

Five minutes into the second-half, Neath went in front. Bargoed’s defence was up to the mark as Owain Morgan, Aled Brew, Gareth Lloyd and Elis Hopkins were held up but Neath’s forward pressure was incessant and ultimately lock Matthew Davies was rewarded with the touchdown and Steff Williams added the conversion to make it 12-7. 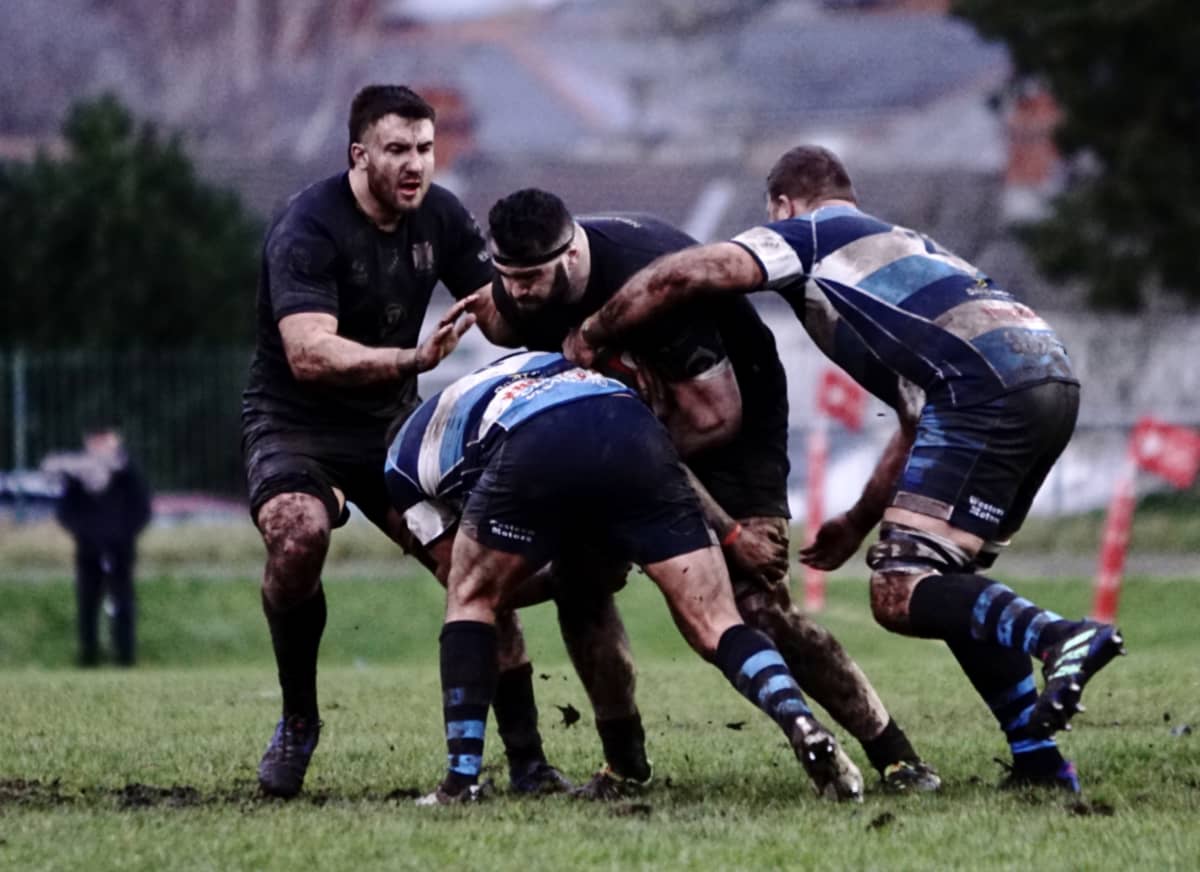 Back on the attack, Neath declined a simple penalty in favour of a lineout option which Bargoed defended well and minutes later Neath took a longer and more difficult shot, Williams doing the honours for 15-7.

Bargoed stepped up their effort and Neath did not provide their halves with the best protection thus putting themselves under pressure. Then came two cardinal Neath errors – both were touch-finders a long way from the side-lines; both failed to make their intended destination.

First, a penalty award fell short of the touchline and instead landed in the grateful arms of Norton who made more yardage than was reasonable along the far touchline before launching a speculative kick ahead of him.

The ball bobbed and bumped, twisted and turned, scampered and scooted and somehow it eluded three or four Neath attempts to fall on it allowing supporting hooker Wade Langley to get to the touchdown first.

It was a scruffy, horrible try from Neath’s point of view but it doesn’t matter how the points come and it was seven valuable points to Bargoed as Steff Jones’ conversion reduced Neath’s lead to 15-14 and re-ignited the home side’s belief.

After a 20-metre Griggs charge, Steff Williams made amends when he landed his second penalty to make it 18-14 – but then came Neath’s second big blunder after Bargoed booted more in hope than expectation to the posts. 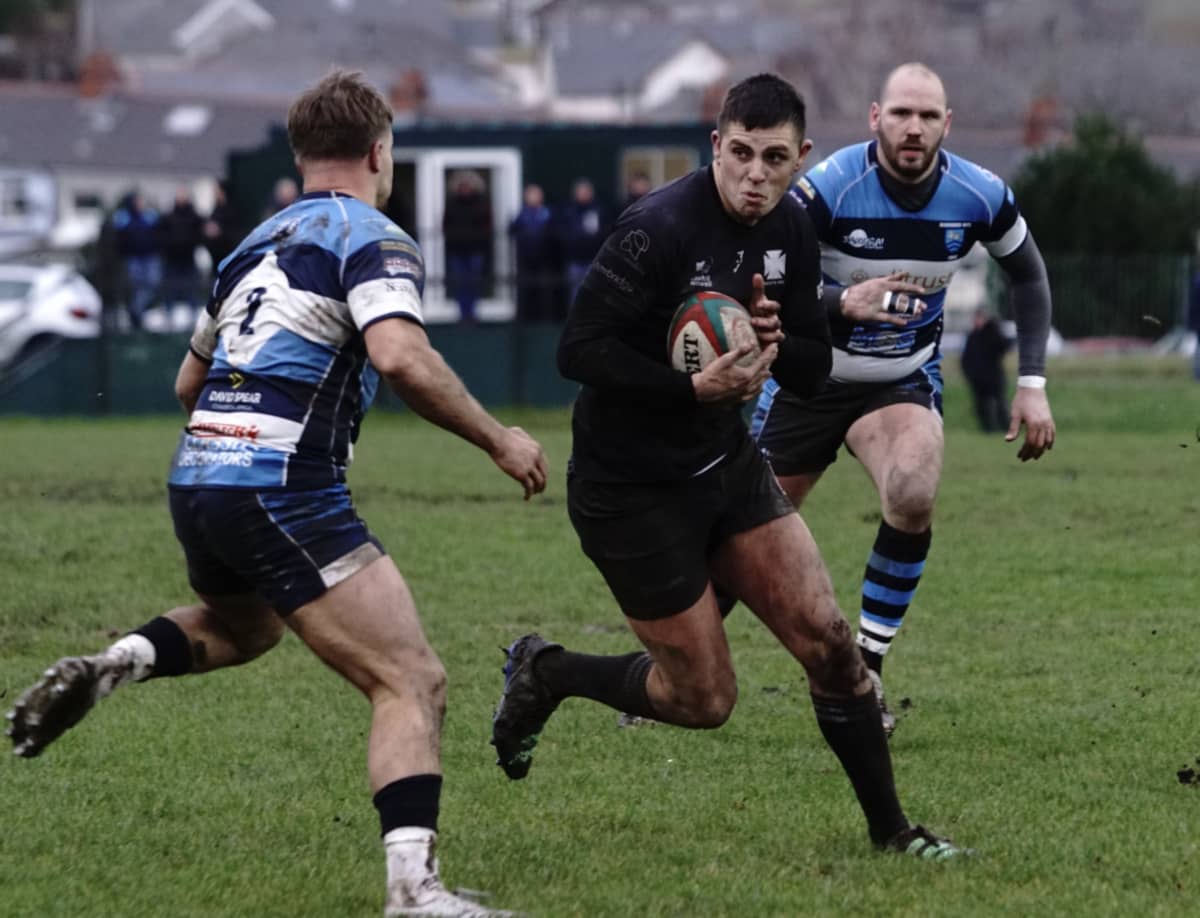 This time, Neath’s relieving kick found Bargoed replacement Duane Dyer who ran it back into the 22; Bargoed retained possession, Neath repulsed them but eventually the defence cracked as good hands by Bargoed worked the ball left to wing Dale Williams who dabbed down to put Bargoed in front.

Steff Jones added a magnificent conversion from the touchline to make it 21-18 to the home side and there was no way back for Neath. In fact, things could have been a lot worse but Bargoed’s last minute lineout went astray – had they scored a try, it would have tipped the home side two crucial points.

As it was, they gained only three on Neath who now lead by 10 points although Bargoed have a game in hand and there is a long way to go yet with the league season not half complete.

Next Saturday both clubs turn their attentions to the Cup – Bargoed’s confidence boosted ahead of their tie with league leaders Pontypool and Neath looking to get back on track quickly against nearby Trebanos at The Gnoll (both 2.30pm kick offs).