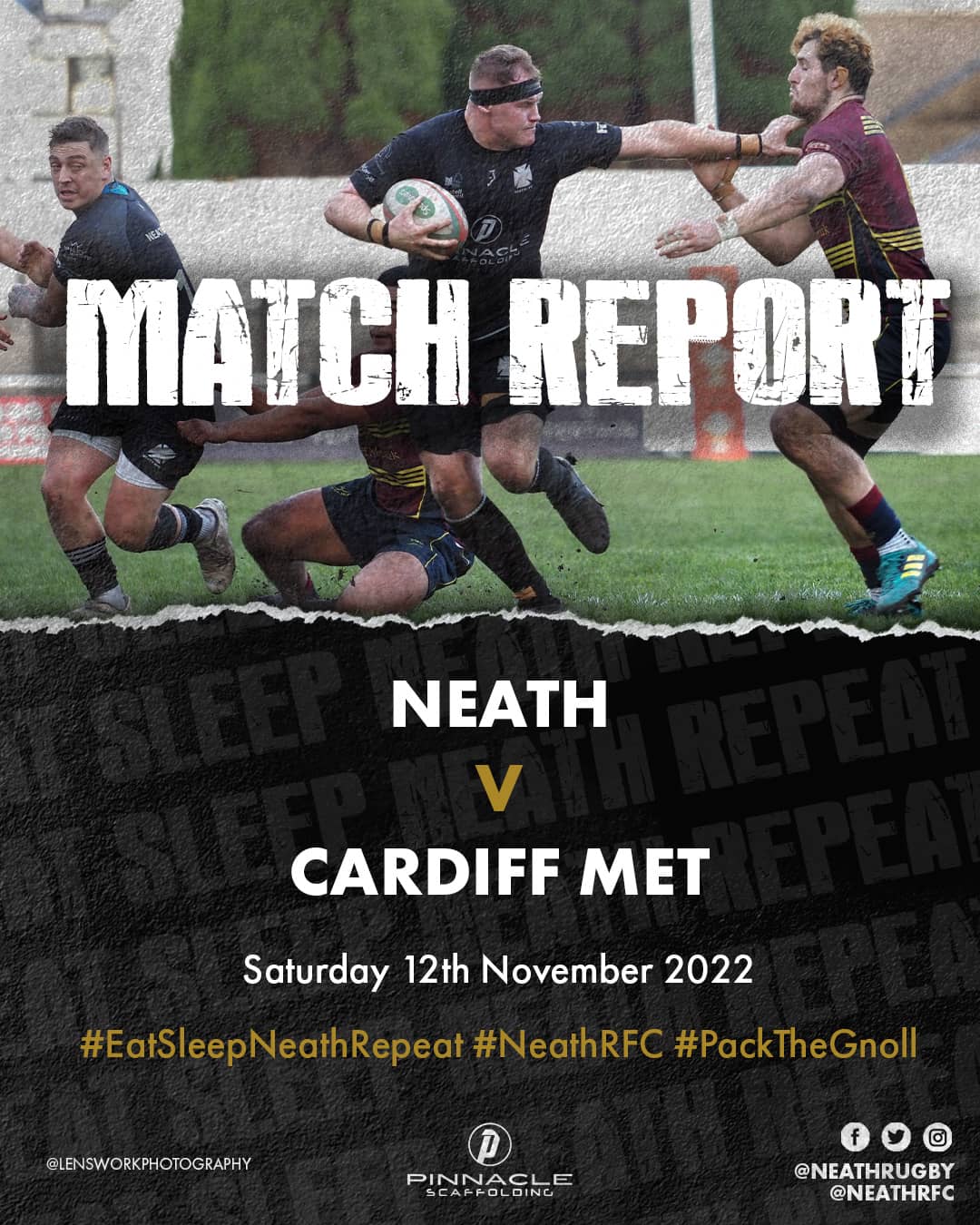 This rugby spectacular was played at a cracking pace and Neath ran out convincing winners, scoring 9 tries to 2, against the promising students of Cardiff Metropolitan at The Gnoll.

Fast and furious, it was nothing like some of the turgid stuff shown on TV as, from the outset, two fine teams flew into the contest and the free-flowing rugby was encouraged throughout by excellent referee Mr. Elliot Mayor (Cardiff).

The unseasonal Autumn weather may have been dull and very mild yet Neath and Cardiff Met served up a game which was anything but; the fitness and skill-levels were high and early on the big tackles thumped in – if only Neath’s first cup-winning captain Martyn Davies, an old boy of the college, had still been with us, he would have loved every minute. 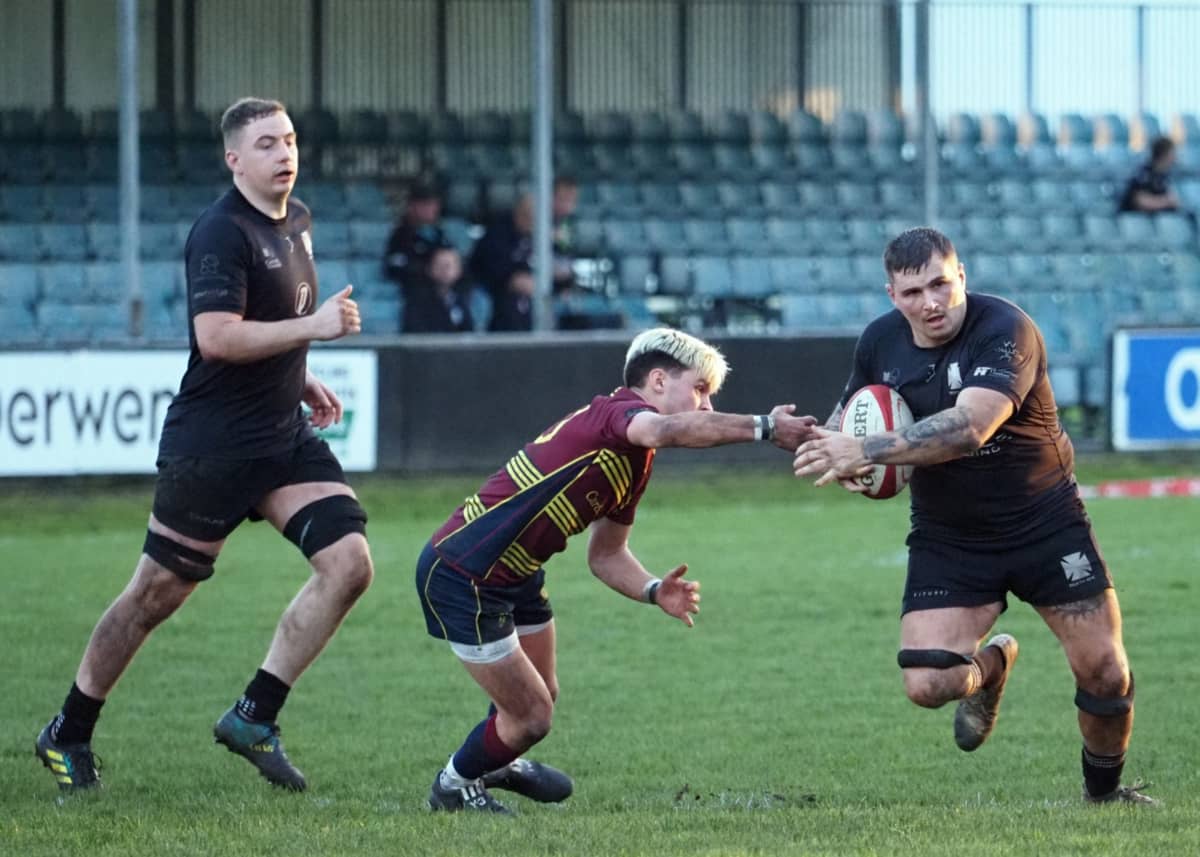 Impressive flanker Morgan Kneath re-gathered the kick off to propel Neath back onto the attack and, from lock Matthew Davies’ lineout take, the Neath pack showed their strength and power and hooker Sion Crocker got the touchdown to make it 13-3 on the half-hour.

Neath pinned the Met back with a few lengthy kicks but full back Samuel Trodd was an eager counter-attacker and the students were making a decent fist of it. They nearly pulled off a try of their own but U.S.A. Under-20 cap Porter Goodrum put a foot in touch then Ethan Morgan early-tackled Steff Williams.

As half-time neared, a sweeping Neath movement ended with tireless flanker Owain Morgan crashing over between the posts but the referee had spotted crossing in the build-up; he had also seen an earlier Met infringement so he sent lively visiting scrum-half Ali Stacey to the sin-bin and awarded Neath a penalty.

The Blacks kicked to the corner and another commanding forward surge resulted in a second try for Sion Crocker which meant that Neath led 20-3 at the break.

Entertaining as the first 40 minutes had been, in the second-half there was an air of the Spanish Plaza de Toros about The Gnoll – and it wasn’t just the warmth !  The mercurial Ethan Morgan started it all : almost from the kick-off he jinked his way at speed through a toreador-like defence which, mesmerised, waved him on his way for a splendid solo try which he converted himself to bring it back to 20-10.

With back-rower Elis Hopkins back on the field for his first game since returning from Llanelli in the summer, Neath responded immediately. Great continuity and a flashing run by Ryan Evans helped set up Lewis Evans for his second try which clinched Neath’s bonus point and Steff Williams’ conversion made it 27-10.

But Cardiff Met struck back and again it was Ethan Morgan who provided the inspiration. With the referee playing advantage, Morgan espied no second-line of defence, dinked through and won the race to the touch down for his second try and converted himself.

It was the ingenuity of a true Welsh outside-half and Morgan’s effrontery spurred Neath into action. At 27-17 the game was still very much in the balance but Neath suddenly transformed into the role of the matador as they went in for the kill.

Neath upped the already considerable pace of the game and more sparkling combined play resulted in centre Ben Atkins crossing for Neath’s fifth try which Williams converted to make it 34-17.

It did not end there; indeed, the entertainment scaled new heights as Neath blazed home with some sparkling handling – each pass might have provoked a resounding “ole” – and, despite losing wing Aled Brew who was sent to the bin for an innocuous tackle, the Blacks kept up the momentum.

Their 14-men lifted their effort to cover the numerical deficiency and a classical break from his own half saw replacement centre Jonny Bayliss blazing through for Neath’s sixth try but Williams’ conversion clattered into the woodwork so it was 39-17. 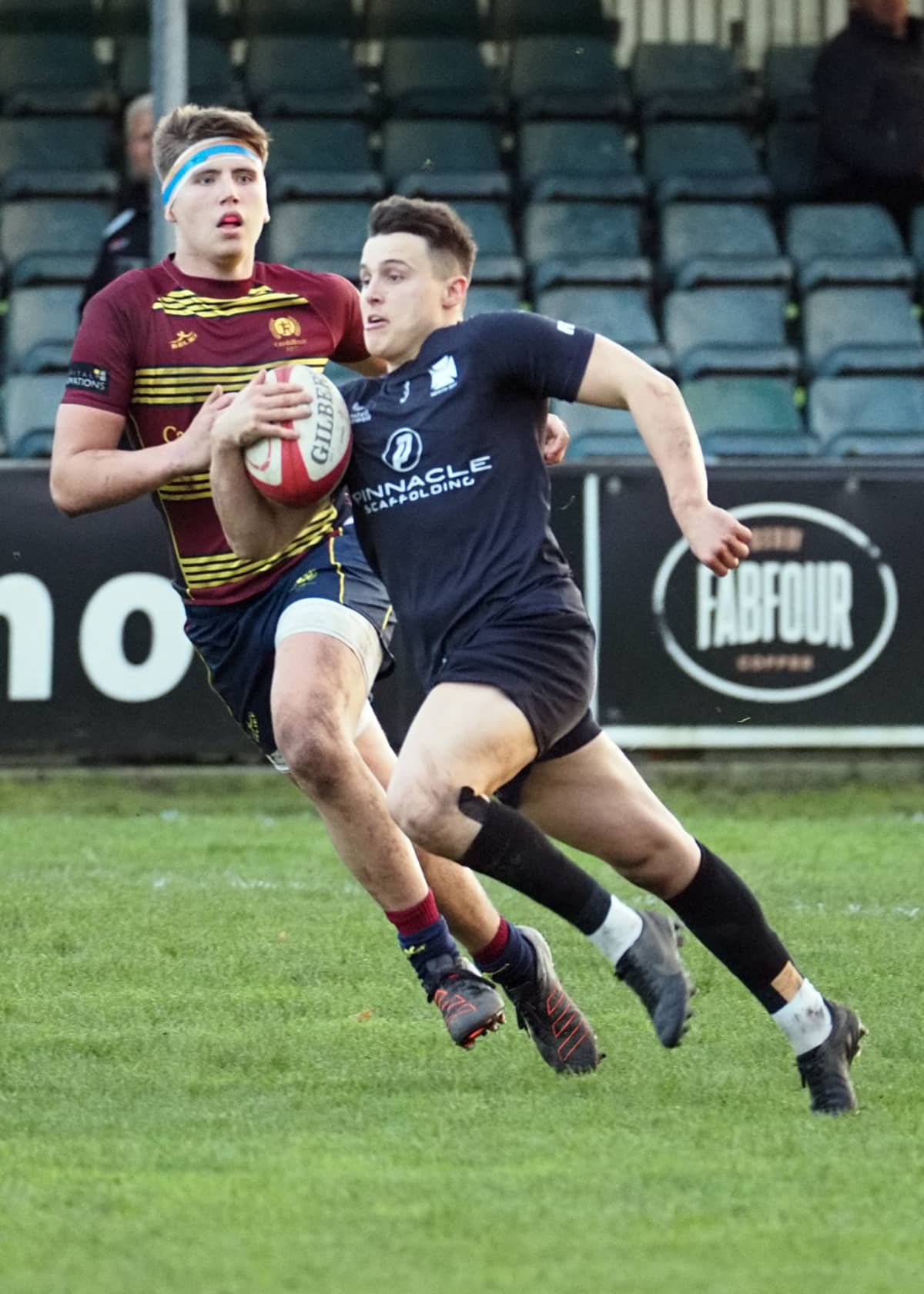 Still Neath pressed and yet another attack led to Gareth Lloyd – one of three formidable props with Tim Ryan and Jack Powell – popping up at the end of a move and being all but driven over in the right corner.

But the Blacks were not to be denied and brilliant running by Griggs and Lee Evans found replacement scrum-half Jay Weaver speeding up in support for the seventh try – his first for the Club – which Williams converted.

Next, a weaving run by winger Ryan Griffiths from just inside his own half brought him the eighth, Williams converting for 53-17.

Neath’s sleight of hand – honed upon the training-field – had many in the crowd on their feet and an exquisite chip, chase and collect by acrobatic replacement hooker Josh Clark paved the way for Lewis Evans to cross for Neath’s 50th league try of the campaign – one which completed the first hat-trick by a Neath full back since the halcyon days of the esteemed Gareth King who was a different type of runner. 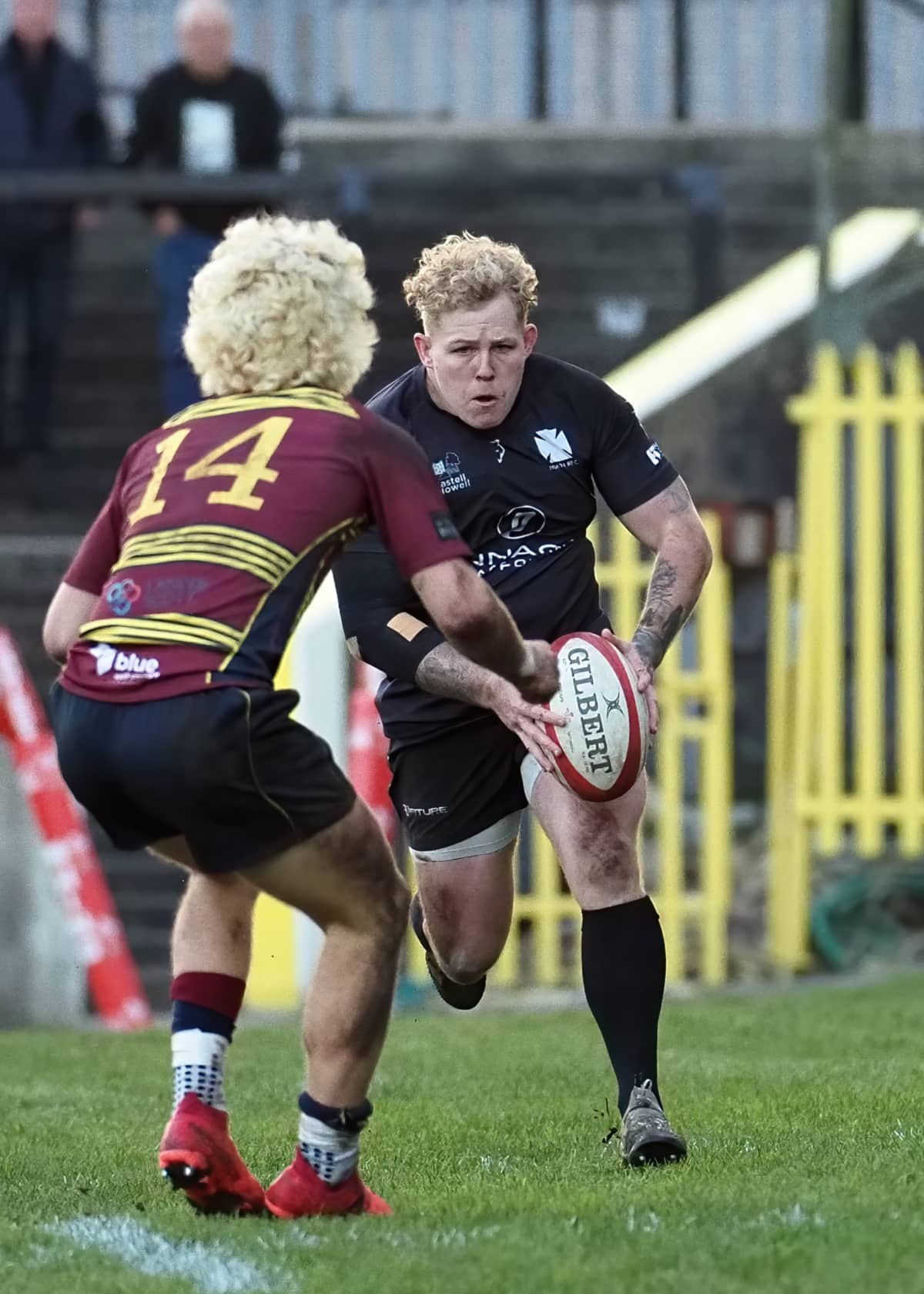 The poor scoreboard operator had not kept up and Williams’ sixth conversion out of nine made it a round 60 points – an unfortunate fate for the energetic students who had contributed much; worry not – Ethan Morgan and they will come again for their best days lie ahead.

It was then time for “refreshments” and the Wales-Argentina international where the Clubhouse attendance was swelled by many who had not watched Neath earlier – shame on them for they had missed the richest entertainment of the day !

Championship-toppers Neath meanwhile head to Division 1 West’s 125th anniversary-celebrating Brynaman on Friday (7.15pm) before a free fortnight in which to prepare for the next league assignment which is a tough visit to Ystrad Rhondda.